Mobile advertising consolidation is being driven by these three forces 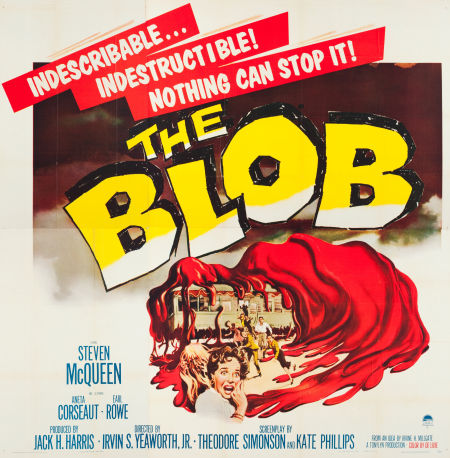 Mobile advertising consolidation has accelerated because of macro trends within mobile.

By most standards, the mobile advertising space seems to be on an endless growth trajectory: total global spending on mobile advertising is projected to reach $42BN in 2017,  users’ attitudes toward mobile ads are apparently trending towards ambivalence, and an entire tools ecosystem – from re-targeting to attribution to advanced retention and conversion solutions — has emerged to assist mobile marketers in buying the most profitable media. With the industry in such an ostensibly healthy and frenetic state, a curious question emerges: why is the mobile ad space consolidating so rapidly?

In other words, given growing demand for media buying and the expanding role of mobile advertising in most agencies’ overall media mix – mobile is expected to represent 35% of total digital media spend by 2018 — what is driving the dramatic consolidation of the mobile advertising space? In the past four months, a number of high-profile acquisitions have been orchestrated by platform operators and large advertising networks:

July 2014:
• Yahoo! acquired mobile ad network and analytics provider Flurry for $240MM (Flurry had raised nearly $75MM and had hinted at an IPO as late as September 2013);
• Facebook acquired video ad tech company LiveRail for reportedly between $400 and $500MM.

This consolidation activity is not necessarily surprising; it was foreseen by many as an inevitable side effect of the transition from the “ads that work on mobile” paradigm to the “truly native mobile ads” paradigm that is emerging as dominant. The fact that this consolidation is happening now, when the periphery of the mobile advertising space is undergoing what appears to be a boom, is interesting, but dissecting the trend reveals three forces that are probably behind it.

1) Ad impression supply may have peaked in high ARPU regions.

Smartphone adoption growth — that is, people switching from feature phones to smartphones — is slowing in the highest ARPU regions, meaning new users are not entering the app marketplace and thus supplying truly new impressions for advertisers to purchase. Put another way: more and more advertisers are chasing a static number of eyeballs, which is driving CPMs up but hurting undifferentiated networks that fill weaker-performing ad units and don’t own their own traffic.

The phenomenon of slowing smartphone adoption is seen, by proxy, in Facebook’s Q2 earnings report:

On Twitter, the differential between high ARPU and low ARPU regions is less dramatic, but the overall growth picture is far bleaker: 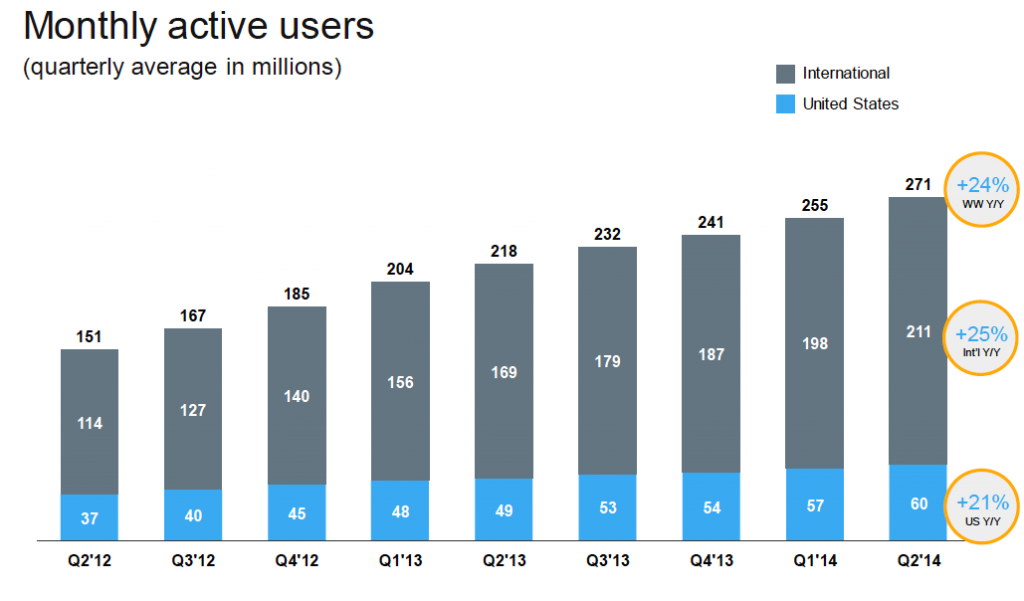 From Q1 to Q2, MAUs grew by 5% in the US but only 6% “internationally” (all countries except the US). The distance in ARPUs between the US and the “international” region on Twitter is similarly vast, however, with $3.87 in revenue per 1,000 timeline views in the US compared to $0.75 internationally: 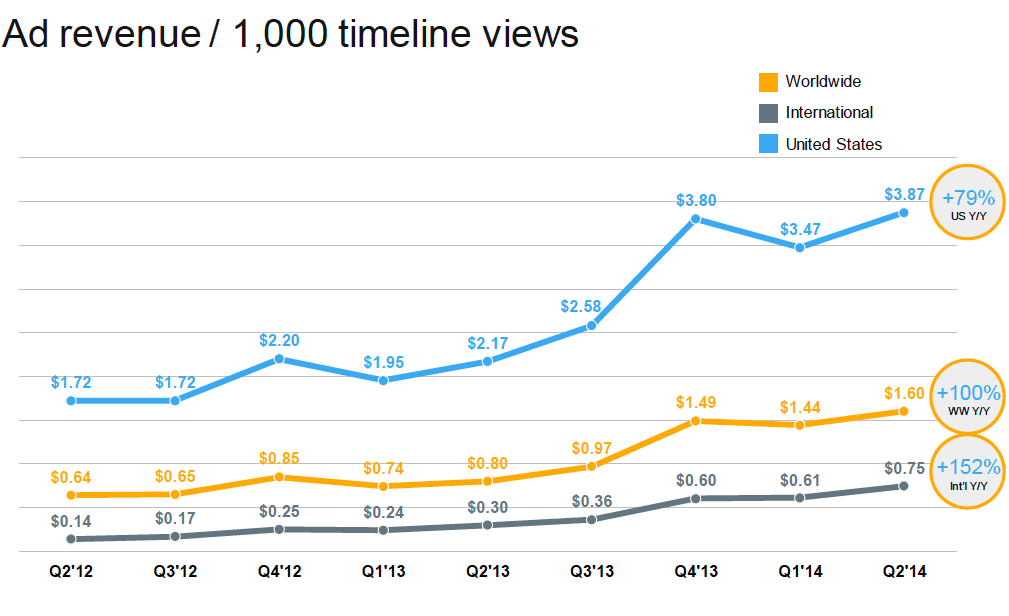 This data points to a situation in which large ad network operators (proxied here by Facebook and Twitter, although both essentially are ad networks), facing slowing organic growth in the regions of the world that provide most value to advertisers, must supplement their reach through acquisitions of new supply.

2) Facebook is edging smaller networks out of the market. 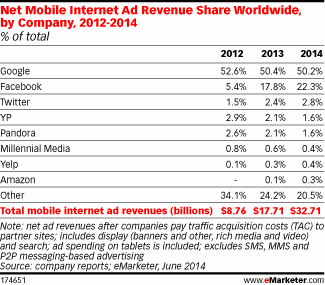 Google’s lead in mobile ad revenue may be insurmountable, at least in the medium term, as its position here is tied to its dominance in search, in which its commanding superiority may be intractable relative to its current competitors. This is borne out in the trend over the past two years: Google lost only 2.4% of worldwide mobile ad revenue market share as Facebook’s ballooned by 16.9%.

This market share capture came at the expense of large ad platforms like Pandora and Millennial Media, which slipped by 1.3% and 0.4%, respectively. But in large part, Facebook’s expansion ate into the market share of the “Other” category, for which market share dropped by 13.6% over the period. The “Other” category is comprised of all of the mobile ad networks that never reached a point of self sustainability through product leadership or scale leverage and which have either died or been subsumed by larger operators.

3) In order to differentiate themselves, the largest platforms are vertically integrating and building moats.

Facebook’s recently-announced Atlas, its ad tracking technology that will allow advertisers to reach users on non-Facebook properties, coupled with its audience network amounts to an ad platform far larger than its in-app news feed. Facebook has effectively established an advertising data layer across all of mobile and given advertisers the means to only use Facebook in running global, universal campaigns. Taken in the context of Facebook’s Parse backend service, it seems clear that Facebook wants to offer app developers the opportunity to build, grow, and monetize their products on a global scale using only Facebook tools.

Twitter is attempting to do the same with its new development platform and its improved analytics suite. And Yahoo!’s acquisitions (less recent than its Flurry acquisition but still relevant to this point is its February 2014 acquisition of Mocean Mobile) have similarly attempted to achieve the same end: building a full-stack advertising environment that locks in advertisers at the expense of other networks.

This has created a technology arms race: since the most lucrative markets are no longer expanding, growth must be achieved by advertiser lock-in and increased per-user advertising revenues, and both of these things require an offering consisting of superior tools.

It seems unlikely that the pace of consolidation in the advertising space will slow considerably in the near term; mobile marketing costs are rising because the publisher mix is diversifying and because users are spending more money on mobile. While a new entrant – either a network offering a differentiated ad format, or a technology provider offering a superior targeting / ad management tool — could still potentially reach critical mass to the point of self sustainability (and, given the size of the market, an IPO), the most active players in the vertical have such large balance sheets that early-stage acquisition prices may be too tempting to turn down.

Not to mention that ad tech has not historically delivered stellar results in the public markets: 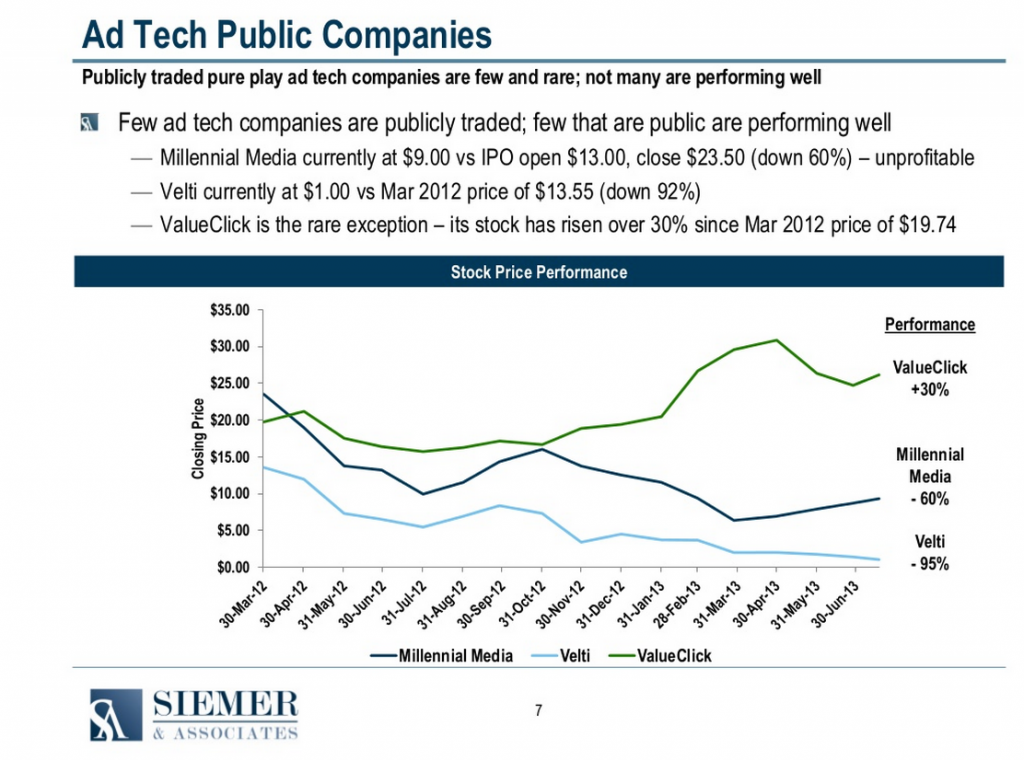 Whether mobile changes this remains to be seen, but historical performance may be compelling enough to keep the M&A embers stoked in the mobile advertising space.