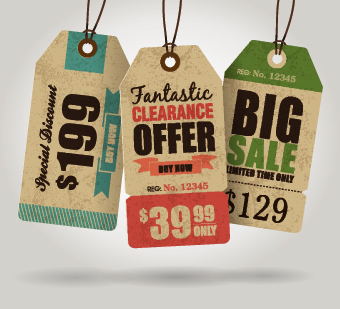 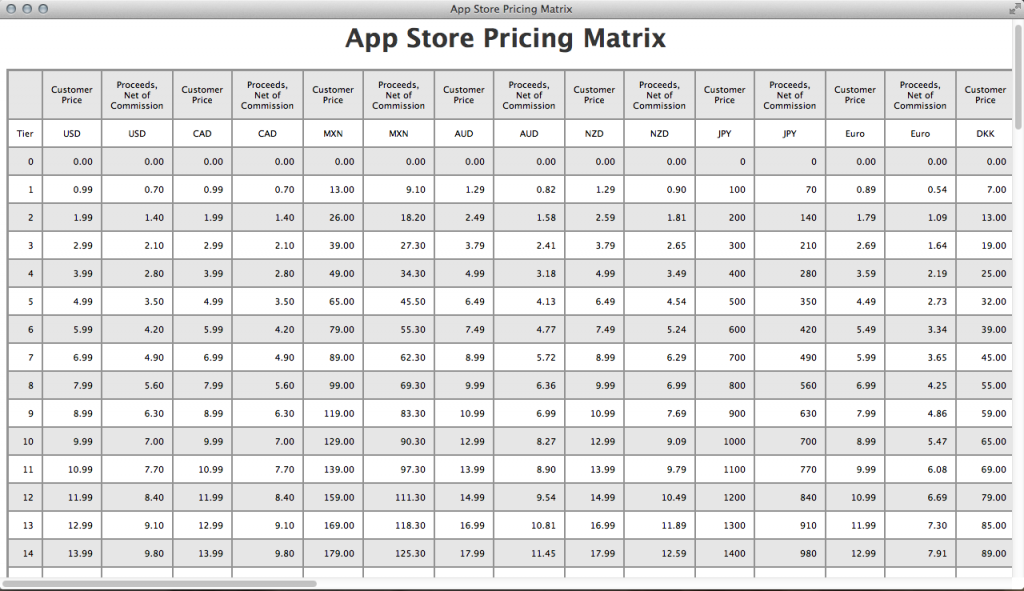 The change Apple announced comprised various price adjustments to account for currency fluctuations (for example, an increase in Euro-denominated price tiers to accommodate the Euro’s decline against the dollar) as well as the introduction of two “low price” tiers to the Indian, Indonesian, Mexican, Russian, South African, and Turkish app stores (a similar low price tier was already available in the Chinese app store). Apple had last updated its Price Matrix in January with a change that, in part, adjusted prices in the EU following a legislative change to value-added tax calculation.

While these “low price” tiers give developers additional flexibility in terms of offering appealing in-app purchases across the entire income-per-capita range, they don’t ameliorate discrepancies in purchasing power parity across geographies (that is, while the price points are lower across the board, they don’t give developers the ability to optimize price on a per-country basis). And although from Apple’s perspective, allowing developers to give preferential treatment to users in one country versus those in another on the basis of price — for example, by offering an in-app purchase to users in India at 1/33rd of the absolute price as is offered to US users, which is the ratio of the two countries’ per-capita GDPs — is probably a good thing (and also reflects the fact that Apple products are luxury goods), it prevents developers from benefiting from producer surplus within each of their markets, which is one of the principal strengths of dynamic pricing in the freemium model.

That said, because Apple changes pricing tiers manually at irregular intervals and because it does implement a limited adjustment for purchasing power parity, discrepancies exist in the absolute prices of IAPs in some apps across currencies. Consider how the absolute value of the dollar-denominated “high price points (HPP)” (largest possible purchases available) compare in the US, China, Germany, Japan, UK, South Korea, Russia, and India within Game of War, Candy Crush Soda Saga, Tinder, and Skype: 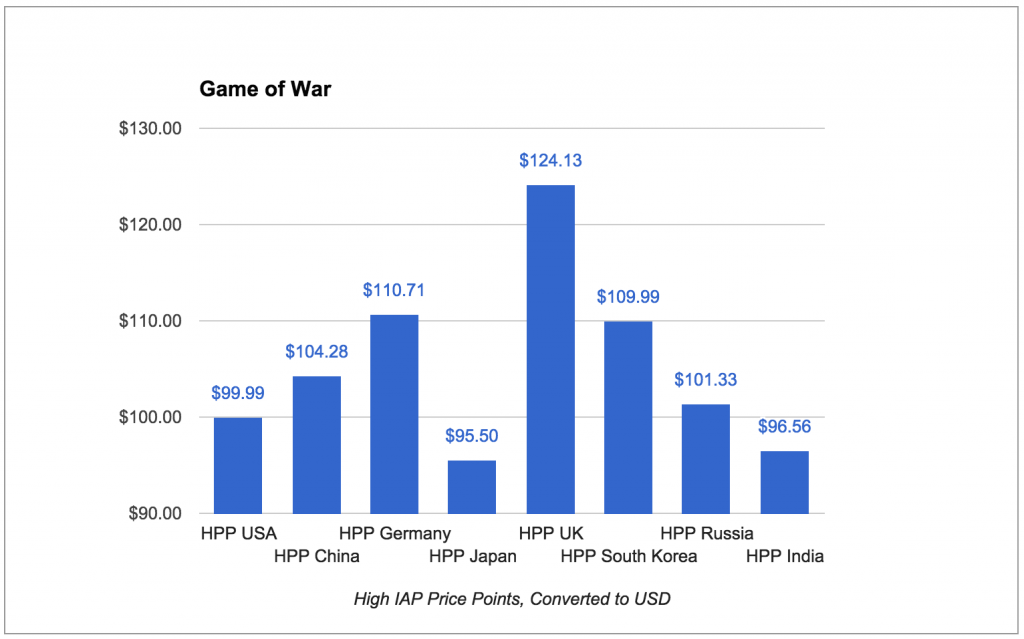 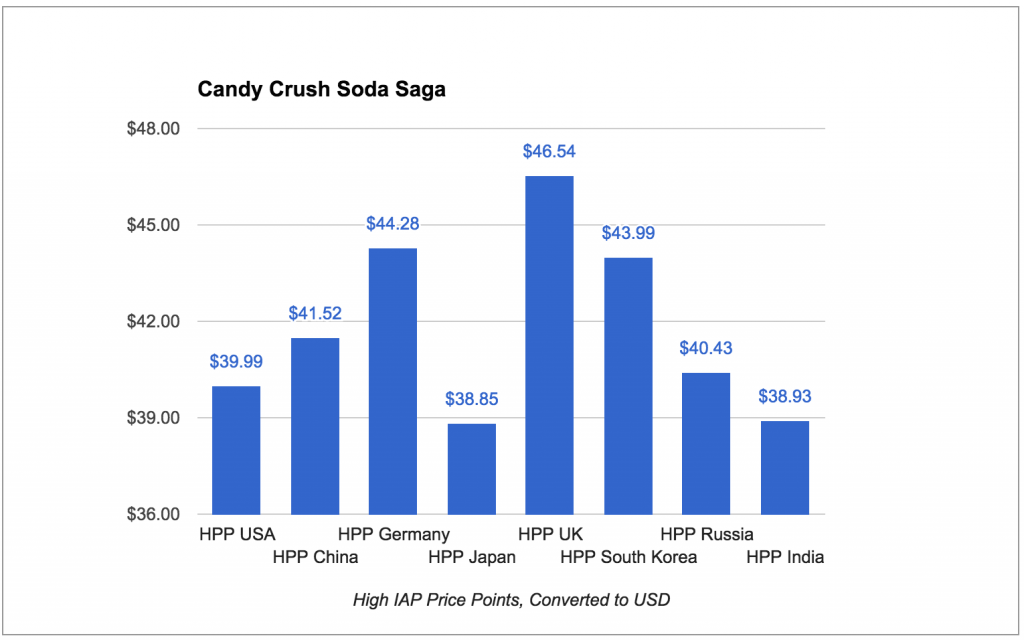 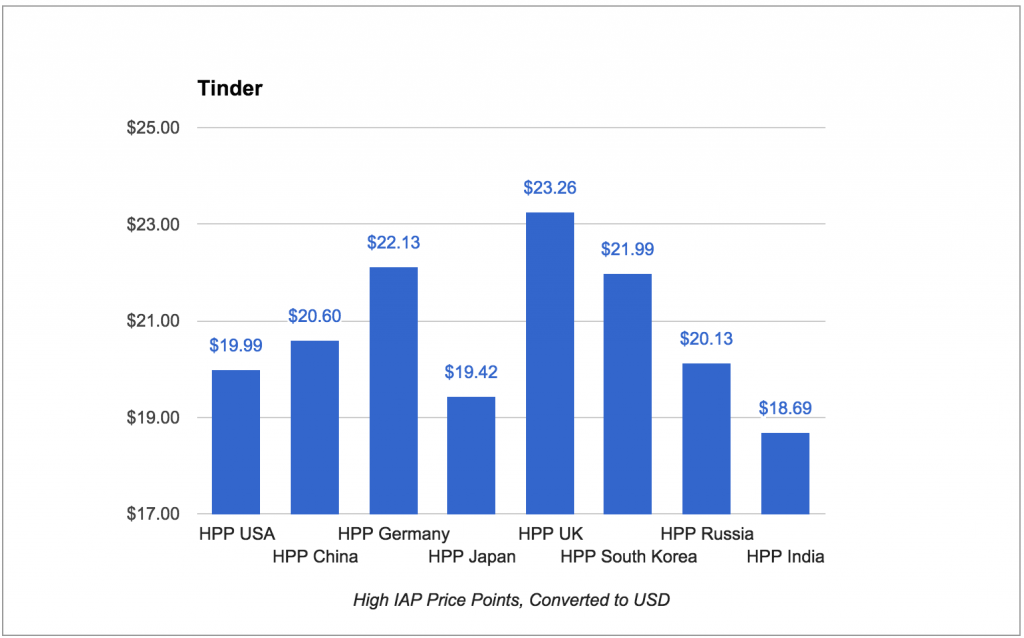 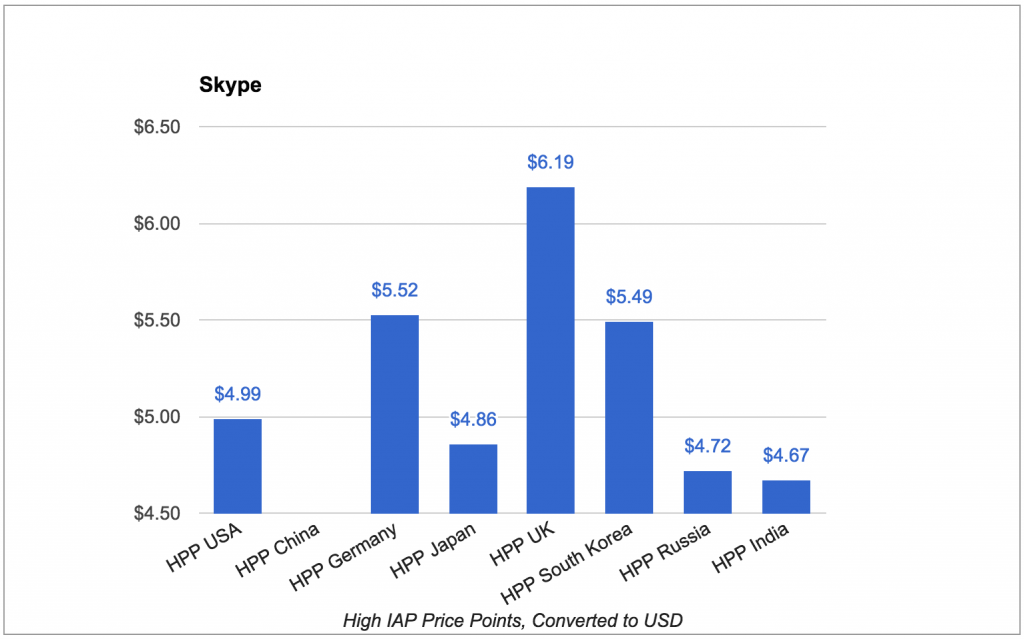 The implication of these charts is that, while on a per-item basis a developer can’t optimize price by geography (eg. charging far less in India than in the US for the same item), a pricing strategy can be pursued globally by optimizing an app’s economy to its target geography.

For instance, why is the high IAP price point for Tinder (in the US, $19.99 for Tinder Plus) set where it is? Not because the cost to Tinder to deliver swipes is derived from production inputs; it costs Tinder nothing to provide the swipe currency to users. If Tinder were to choose a lower price tier for Tinder Plus, it might experience greater rates of conversion in lower average income countries but also a level of consumer surplus in the US (and other higher average income countries) that erodes overall profit. That is, a lower price tier for the same product might be less profitable simply because US users are willing to pay more for Tinder swipes and the US is the company’s target market.

As the markets for various types of apps decouple from per-capita GDP rankings (eg. China becoming the largest mobile gaming market by 2016), target markets and price tier selection will become something that developers need to think about with apps that are released globally. Optimizing revenues based on the price sensitivities of users in the US or across the Western world may not provide the highest levels of aggregate profit, even on iOS.