The world’s largest mobile gaming developers – such as King and Supercell, both with company valuations in the billions of dollars — have created massively profitable franchises, proving that single titles can generate hundreds of millions or even billions of dollars in yearly revenues.

But to justify high valuations and inspire confidence in public markets, free-to-play mobile game developers need to not only consistently develop hits but manage portfolios of concurrent hits. Supercell’s recently released financial report for 2013 revealed that the company generated $464MM in EBITDA for the year, or about $200MM less than EA’s operating cash flows for the fiscal year. At the time of this writing, however, EA has a market capitalization of $8.54BN, which is almost 13x FY2013 operating cash flows; Supercell, on the other hand, received its $1.5BN investment from SoftBank at an EBITDA multiple of 6.5x.

That EA and Supercell have wildly different valuations (EA’s in the form of market capitalization, Supercell’s in the form of the price SoftBank was willing to pay for 51% of the company) is not surprising: EA is a massive company employing 9,000 people worldwide and Supercell is a comparatively tiny operation of approximately 140 employees.

The curious difference between the companies is the significant distance between their multiples, the crux of which is diversification. As of its last annual report, EA published games through five “labels” for consoles, the PC, tablets, mobile devices, and the internet. Supercell, by contrast, operated two mobile / tablet games in 2013. If any of EA’s income streams were to precipitously evaporate, the overall impact on the company would be muted; the same is not true for Supercell, or any game developer managing only a handful of titles.

Diversification is at the heart of Modern Portfolio Theory, a concept first introduced in a 1952 paper by Harry Markowitz and for which he, Merton Miller, and Harry Sharpe jointly won the Nobel Prize in economics in 1990. The central thesis of Modern Portfolio Theory is that the risk of a portfolio of assets is dependent not only on the variance of the returns of the individual assets but on the correlation between the returns of the assets in the portfolio. In other words, since the averaged risk of individual assets in a portfolio is different than the risk of a combination of assets, the measure of how the returns on assets in a portfolio move together (called covariance) influences the overall risk of the portfolio.

The hit-oriented nature of free-to-play mobile gaming is increasingly necessitating the operation of portfolios of games: as individual games surge or decline in popularity, the only way of stabilizing a company’s total revenues is to maintain a number of games concurrently. This isn’t an exclusive concern of large developers with public markets ambitions; even small developers are affected by changing tides in the mobile gaming marketplace and can’t rely on the continued performance of a single game to sustain their businesses indefinitely

But simply operating a portfolio of games doesn’t alone limit risk; Modern Portfolio Theory states that the covariance of returns of assets in a portfolio influences the overall risk level of the portfolio. It’s therefore not sufficient for a gaming company to diversify its revenue base; it needs to also ensure that the revenues from titles in its portfolio don’t move together. But the broader discussion of appropriate risk balancing in a mobile gaming portfolio begs the question: what is risk for a mobile game?

Defining risk for a mobile game

In Modern Portfolio Theory, Francis and Kim define risk as “dispersion of outcomes around the expected value”; within the context of Modern Portfolio Theory, this can be taken to mean the “spread” of returns around the average. This is generally described with the descriptive statistics variance (σ2) and standard deviation (σ), variance being the sum of squared differences from the mean of a set of values, and standard deviation being the square root of variance.

A similar probability distribution for a mobile game might also take into account historical returns (in the form of revenue), but games and public stocks are fundamentally different. Companies go public with the aspiration of being perennially active, but free-to-play games — even those released as services meant to be provided over a very long time horizon — may experience a distinct lifecycle over which daily revenue levels change dramatically over time. Consider this diagram of a theoretical game with a lifecycle comprised of three phases: 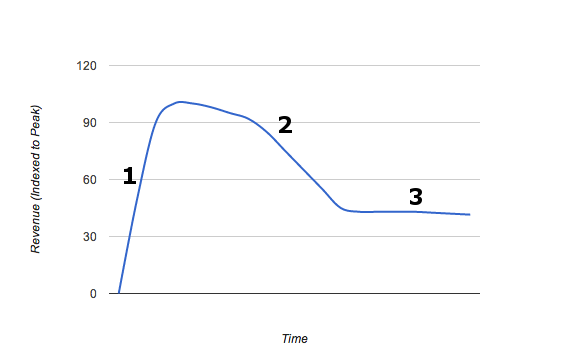 Phase 1 can be thought of as a “ramp up” stage, phase 2 as a “decline” stage, and phase 3 as a “stable operations” stage.

Creating a probability distribution of historical revenue values for a game like the one illustrated above wouldn’t make sense because revenue is highly dependent on the “phase” the game is in. In any case, risk, at the level of a phase within a game’s lifecycle, can be thought of as the dispersion of revenue values around that phase’s mean.

The revenue of a game might be impacted by a general shift in consumer sentiment away from aspects of its core mechanics or aesthetic, such as theme (eg. pirates) or genre (eg. city builder). As a result, the revenues of two games being operated concurrently might experience covariance (ie. change together) if the games are similar enough that broad shifts in consumer sentiment would affect them both.

Appealing to contemporary consumer taste is incumbent on any developer. The most obvious way to diversify against “taste” risk would be to build a broad portfolio serving a huge number of game genre and theme combinations to match the overall mobile gaming landscape in a process known as naive diversification. Building such a portfolio of games would reduce the risk level of the portfolio to the general risk level of the market — that is, as a developer’s portfolio approaches the general makeup of the app store (or the total app universe), then macro-level shifts in sentiment affect both in the same way.

This is clearly unrealistic, even for the largest developers. It’s also not necessarily the most effective strategy, because risk reduction incurs decreasing marginal benefit as additional assets are added to a portfolio under a naive diversification process, as illustrated by Jonathan Dickinson in “Portfolio Theory”: 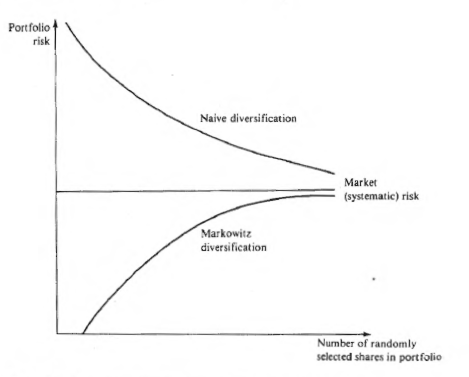 The competing strategy in this graph, Markowitz diversification, asserts that a portfolio of just two assets can exhibit minimized risk by achieving perfect negative correlation (ie. the asset returns move in opposite directions, indicated by a correlation coefficient of -1). This is more relevant to the construction of a mobile gaming portfolio.

Covariance within the context of financial assets is usually considered from the perspective of a global trend shift; for instance, the diagram below from Asset Management in Theory and Practice by Hughes describes the effects on the stock prices of both an oil company and a transport company under various scenarios where the price of oil changes:

It seems obvious that a portfolio would be protected against radical swings in value as a result in changes to the price of oil by including both stocks. Hughes illustrates this by simulating a portfolio made up by 40% transport stock, 60% oil stock:

The noteworthy result of this specific portfolio balance is that, in all cases of oil price changes, the competing effects on the oil and transportation stocks produce a 2% increase to the value of the portfolio. By diversifying the assets held, the portfolio’s risk owing from fluctuations in the price of oil have been ameliorated (although it’s also worth noting that potential gains have likewise been diminished).

Commodity price shifts are far more concrete and immediate than any market shifts that might affect gaming revenues, such as changes in consumer sentiment. But those changes can still occur, and thus diversification can alleviate the risk that such changes radically alter total revenues.

Consider a developer evaluating which game to make next, understanding that a market shift in the near future is likely:

Both games have the same expected change to revenue under the two sets of circumstances, but the standard deviation (risk) for the core game is higher than that of the puzzle game, meaning, given equal likelihood of both market shifts occurring, the developer should prefer the puzzle game. Of course, if the developer has the choice to create both games, establishing a portfolio, the situation changes:

In the second scenario, when the developer operates a portfolio of both game genres, either change results in a 10% revenue increase, but the standard deviation of the changes for the portfolio sits between those of the core and puzzle games.

The above scenarios assume that both games generate equal revenue, but this wouldn’t likely be the case: one game might generate significantly more revenue than the other, changing the calculation. Consider a scenario where total revenues are weighted in favor of the puzzle game by 80% to 20%:

In this scenario, the expected change remains 10% (ie. under both scenarios, total revenues increase by 10%), but the standard deviation of the changes has been reduced to nearly 0. The weights can be adjusted to product a portfolio with even lower risk:

The portfolio exhibits a covariance of -0.36, and the correlation coefficient is -1, which is perfect negative correlation:

As noted, swift, radical swings in consumer taste are not as likely as commodity price swings. Perhaps more applicable in a consideration of portfolio theory for mobile gaming is the timing of the shift of the phases of a free-to-play game’s lifecycle.

When comparing the lifecycles of two games, covariance of revenue might be thought of simply as timing: if the games are released concurrently, they could potentially enter states of decline concurrently, resulting in a dramatic decline in total revenues, as illustrated here: 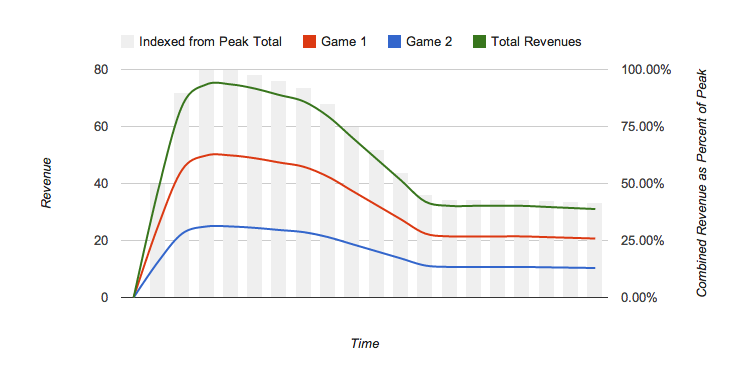 This graph depicts two games, launched at the same time and each exhibiting the three-phase lifecycle pattern cited earlier. The left Y axis tracks revenues for the line graphs and the right Y axis tracks the grey bar chart, which represents total combined revenue (Game 1 + Game 2) as a percentage of the peak combined revenue over the life of both games (in other words, how total revenue increases and decreases).

In this scenario, the combined revenue of both games ramps up quickly and then declines to less than half of its peak. Such an irregular revenue schedule is “risky”, not just from the standpoint of dispersion around the mean, but for practical purposes: staffing, facilities, marketing, etc. are difficult for a developer to plan when total revenues swing wildly.

This graph depicts the same two games but with the second launched at the halfway point of the first’s lifecycle: 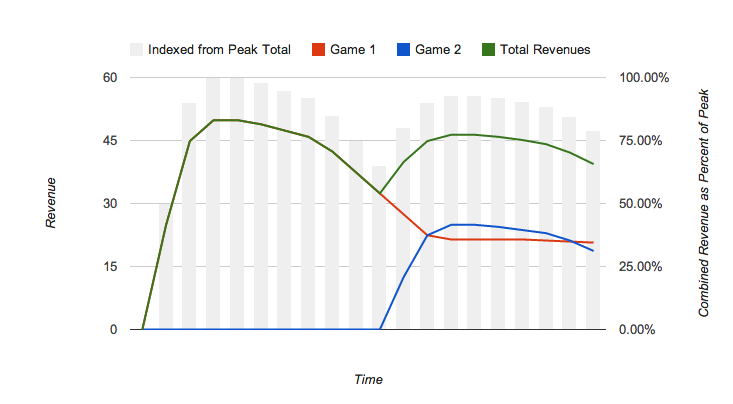 The trade-off for stability in the second scenario is, of course, timing: the total revenues from both games are delivered over 1.5 lifecycles vs 1 in the first graph.

Managing risk for a game portfolio

The difficult questions mobile game developers have historically had to answer in asserting corporate value have always been related to the quality and extremity of hits. First, it was whether hit games could generate massive revenues for the medium-term (1+ years), then it was whether studios could consistently develop hit games, and now it is whether a portfolio of hit games can be managed in such a way that revenues are consistent and somewhat predictable.

Modern Portfolio Theory applied to gaming might attempt to mitigate risk — that is, irregularity of returns — across two dimensions: 1) changing consumer tastes and 2) the (generally speaking) rise-and-fall lifecycle of mobile games. The application of the model is imperfect and not fully fleshed out here, but it’s an important topic to consider as the mobile gaming market continues to evolve.