Millennial Media's acquisition of Jumptap was all about data

On August 13th, Millennial Media, the mobile advertising platform operator, announced that it had acquired Jumptap, another advertising platform operating a specialized real-time bidding exchange for mobile. The transaction was an all-stock deal in which Millennial Media took control of Jumptap in exchange for 24.6MM new shares – or 22.5% of the combined, post-transaction company, with new shares having been issued explicitly for the acquisition – worth approximately $224.6MM at Millennial Media’s closing price on August 9th ($9.13). Millennial Media’s stock price fell by 19% to $6.90 by the market’s close on the day the acquisition was announced.

Neither company was profitable prior to the acquisition: Millennial Media reported a Q2 2013 loss of $3.1MM against a full-year loss for 2012 of $6.8MM on revenue of $177.7MM. The company went public in March 2012 at a share price of $13, which quickly doubled mere hours after beginning trading.

Millennial Media released Jumptap’s financial results as part of the information deck it published with its announcement of the acquisition: Jumptap had a net loss in 2012 of $13MM on revenue of $63.6MM (of which $53MM was from advertising operations). Jumptap raised $27.5MM in June 2012 with the stated aim of going public, although Jumptap’s CEO, George Bell, cited frothy market conditions as the reason the company changed strategic course. Bell will join the board of Millennial Media. 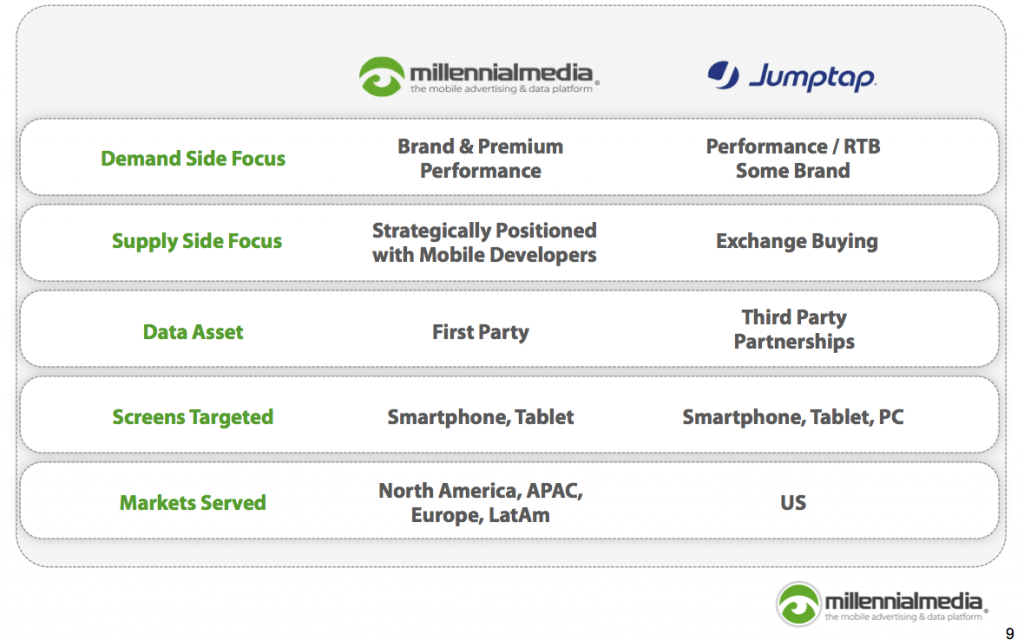 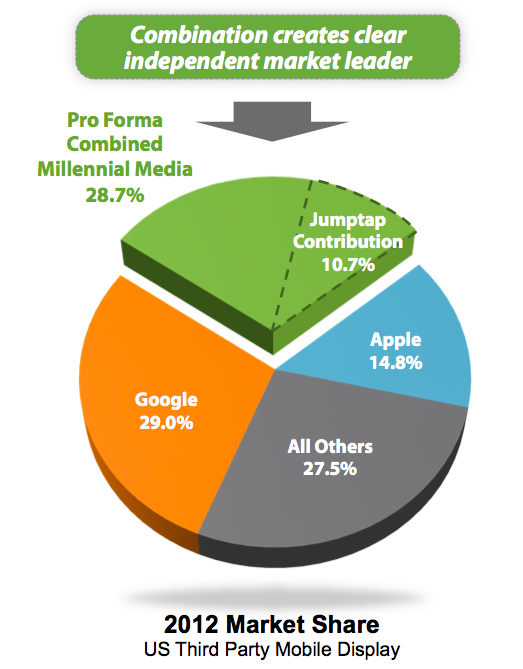 But ad display volume is not likely what Millennial Media was pursuing in its acquisition of Jumptap, which is primarily a real-time bidding and targeting platform. Jumptap holds profiles of 100MM users, bringing the profile ownership of the combined company to 550MM; by comparison, 695MM smartphones were shipped in 2012. In other words, after the acquisition, Millennial Media can not only shed costs and drive additional revenue (according to ICD, the combined Millennial Media and Jumptap will be second only to Google in terms of mobile ad revenue, and by only $2MM) but it can leverage the massive amount of data it held on mobile users with Jumptap’s targeting platform to deliver higher-converting ad placements.

Additionally, of its 100MM user profiles, Jumptap has secondary device information for 44MM of them. This means that the new company can target an appreciable number of users on multiple devices based on historical behavior.

Smartphone penetration is slowing — mobile ad companies can no longer rely on the expansion of new markets to bolster their revenues by default. Targeting for improved performance is becoming increasingly important in delivering quality products, and it has been the catalyst for a recent spate of AdTech acquisitions in the mobile space, as ad networks compete for a finite set of users to whom they can offer ads.

The confluence of these factors – the slowing growth of smartphone adoption and the rise of real-time exchanges for mobile ads – creates an environment wherein networks and agencies are competing not on the basis of ad volume but ad sophistication. The capability of a network to appropriately target users in filling an ad is more important now than the volume of ad placements the network can draw upon, requiring ownership of a fully-integrated data platform. In its acquisition of Jumptap, Millennial Media has modestly increased its reach but significantly improved its ability to optimize ad targeting. To compete, other large mobile networks will likely make acquisitions against a similar strategy in the coming months.