This is a guest post by Ouriel Ohayon. Ouriel Ohayon is the CEO and Co-founder of Appsfire, an app marketing company focusing on discovery, engagement, monetization

How many years will it take until we see the banner die as we know it on our mobile screens?

The lack of real discovery efficiency (yes, the App stores are far from doing enough…) has forced developers to look after efficient (and sometimes not legit) Paid discovery solutions.

But over half a decade after the iPhone and amazing innovations in hardware and software, the mobile ad world is still stuck in the past with the good old banner and advertising technologies.

Banners are ugly. They eat up a good chunk of an app’s real estate and they offer little capability for delivering a clear message. 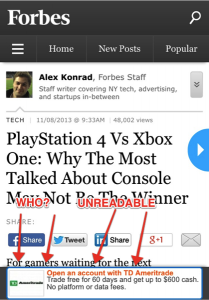 Beautiful apps become ugly because of mobile ads. Here is an example from Instaweather, a gorgeous weather app that the developers have decided to ruin with crappy ads 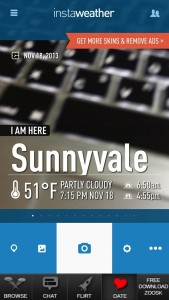 But let’s go beyond the design factor. There is something worse: ads brutally kill the user experience

App publishers may think of ads as something that is not part of their app, but they are. Users will perceive ads that way

Ads, like the app the developer builds, send a message to users.  And it is a bad one: it says “get out of my app, don’t stay here” and it ruins the experience for 99% of the users that don’t want to interact with ads but can’t ignore them (banners can’t be removed)

Well that would be cool if the destination for an ad – the place the ad click leads to — was great. But it is not. The experience is actually pretty bad.

Users are forced out of the app, go to the App store to download another app and are then left with 2 choices: 1) Start from scratch with a new app 2) try to find where they left in the old app before they clicked on a ad.

And how about those ads clicked by accident because they are where they are not supposed to be? This has forced Google to introduce a TWO CLICK banner experience. Nice Band Aid. What a TERRIBLE, TERRIBLE IDEA! 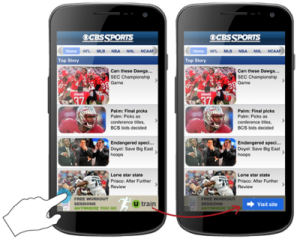 How is that a good user experience?

How many times have you seen an ad and said to yourself “I don’t want to see this specific ad EVER again”, or “mmm, ok, I like this, but not right now”, or, even worse, “Why do I see a banner for an app I already own?” (eg. Facebook ads…)? 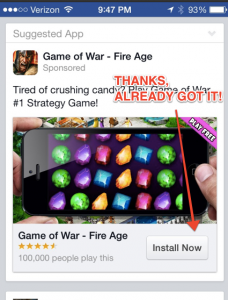 The reality is that no matter how sophisticated the mobile app ecosystem gets, mobile ads are still in the prehistoric age. They are served by dated ad serving technologies that were built for the desktop and cookies (the tracking files on your computer). 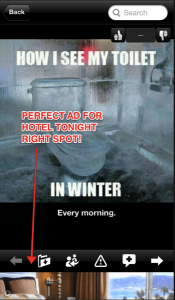 They are served mostly with the purpose of driving installs and ignore the 99% of app users that do not install apps.

If your attention is limited on the desktop, it is even scarcer on mobile. So advertisers have figured out that if you don’t pay attention to mobile banners, maybe a nice little video will be cool. But guess what? On mobile, the attention generosity of the average user is not even a fraction of that available on the desktop.

Users don’t want to wait 15 seconds to see a video. Not even 10 seconds.

Oh, yes, well a magical solution has been found to solve this: rewarding users to watch videos. Is that the best that can be done to solve the “mobile ads suck” problem?

Rewarding users is surely a nice patch — a good band-aid — but that works only with a small fraction of the inventory out there, and it is certainly not the right way to grow the ecosystem at scale (how many publishers can put 10 second videos in their app and localize them?).

Mobile ads are NOT RESPECTFUL

Have you ever seen the banner below? 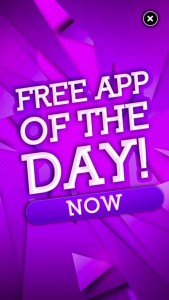 Seriously? This banner is advertising an app that has always been free.

Users are not dumb. You can’t just disrespect users and just expect to get crazy results in return. Those kind of manipulative tricks are ineffective. Who is the Ad network? Who is the advertiser? Give me a reason to believe that this app is FREE TODAY!

Developers who show ads like those or decide to ignore their inherent deception because they receive a check at the end of the month should simply be ashamed.

The problem is that because the ad industry is driven exclusively with the goal of pushing app installs and not engaged users. This results in crappy creative and bad faith from advertisers and ad networks.

This has to end. Maybe regulators will look at this closer. Apple and Google, for example, should do more in this regard.

Mobile ads are NOT TRANSPARENT

How many times have you seen an ad and immediately identified which ad network was serving it? It is sometimes possible (e.g. Google) but it is really hard and very, very rare. Most of the time the consumer (and even developers who host those banners) will have no clue who the network serving the banner is because of various parameters like mediation layers or because the ad network has a vested interest in not being identified 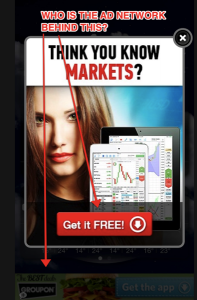 Mobile Ads are NOT DISCLOSED

An ad should be identified as an ad — and not confused with content or something else. There are laws about this topic.

So in theory users should know when an ad is an ad. But that is far from a common practice. How many times have you seen an offer wall or even a full screen that was not presented as advertising? Those formats let you guess whatever you want. 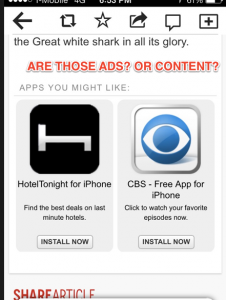 But they are not clearly saying, “ADS BY…”.

Another example is the “offer wall”, the marvel of the 21st century. Do you think users know these are ads? 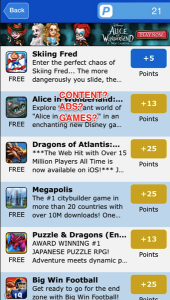 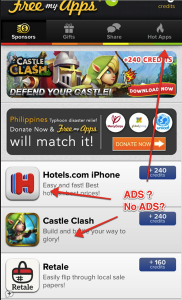 Mobile Ads are NOT LOCALIZED

Most smartphone users are not in the USA — but most big ad networks are. You can’t expect to show a banner in English to a Spanish user and not degrade the user experience.

Yes, localization requires a little more work and little more time. But all non-localized ads do is create more hate from users towards mobile ads.

So why doesn’t it change?

Because money flows in despite the shortcomings of mobile advertising, and because it is easy for developers to just take whatever is available. For now, that is: it won’t last

Why? BECAUSE NOBODY LIKES IT!

Facebook, thanks to a nice integrated ad format that doesn’t suck and intelligent proprietary targeting, has created a user experience that has upset the status quo. Most ad networks have bled money for the past 12 months.

Developers will soon have more difficulty in making money through traditional ads and they will be forced to look at different solutions.

We at Appsfire ran a poll with 500 seasoned developers, and about half of them think mobile ads suck. They are either unhappy about the current state of mobile advertising for any number of reasons or think mobile ads damage the user experience 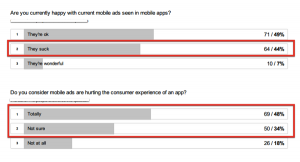 So it is not just users who ignore mobile ads them and don’t like them; developers are also far from being convinced by any solution the market currently offers.

And don’t take just our word for it: Google “Mobile ads suck”.

The vague promise of native advertising

Looking in Facebook’s direction, everyone is now expecting the next big thing in advertising: Native ads.

The problem is that the mistakes from mobile advertising are being repeated.

Native advertising should be about providing a compelling user experience and an intelligent end-to-end experience, from the exposure of the ad to the post download experience.

Native advertising should feel native and “integrated” both in terms of where it is placed and how (fast) it is served. But it should not be confused with content. It’s hard to solve this at scale, unless you want to take shortcuts (Facebook for example did by placing ads that are all but social in their social network. But that s a long debate).

Saying you provide native advertising because you have an SDK with a few lines of code and a crafted banner is far from enough.

Mobile ads will always suck. But they can suck a little less.

The reality is that Mobile ads (like any ads) will always be a nuisance to users – even with incentives. But users can tolerate ads; they have been trained for years by radio and TV. The question is how can you make the 90% of users or decide to ignore them hate them a little less?

How can the industry as a whole focus more on those who hate ads and really improve the experience instead of obsessing over the 10% who are clicking?

Those are tough questions. Certainly their answers have to do with thinking about the user first and not just the performance for the advertiser, whose objective is to reach a maximum number of downloads or a top rank in the app store. The day developers bring the same level of consideration to how ads are integrated within their apps as they do to building apps, the industry as a whole will take a giant step forward.

Appsfire is currently working on something new. We hope to share more details soon.