Parsing fact from fiction in the Cambridge Analytica fiasco 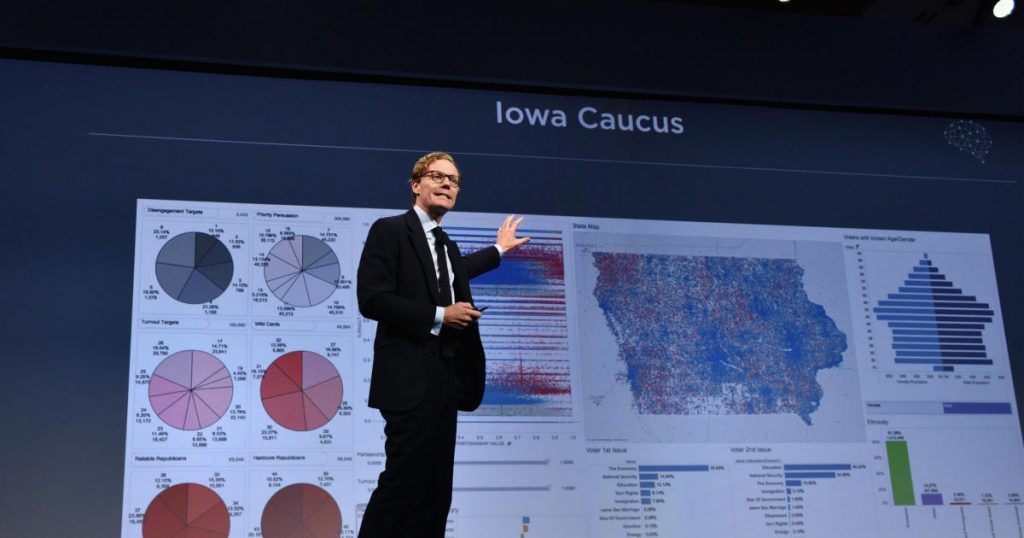 This past weekend, the New York Times and The Guardian published a series of bombshell articles detailing the ways in which Cambridge Analytica, a UK-based marketing analytics and digital campaign management agency, abused its access to Facebook user data in order to build psychographic profiles for more than 50MM Facebook users in service to Donald Trump’s 2016 presidential campaign. Christopher Wylie, a co-founder of Cambridge Analytica who left the firm in 2014, gave the publications a full history of the company’s indecent activities and shone light on its history, its connections to the Trump campaign, and its troublesome modus operandi.

The media furor over the story was immediate and ferocious: outlets excoriated Facebook for allowing its system to be manipulated for political purposes by Cambridge Analytica, and the tepid statements made by various Facebook execs (on social media and in request for comment) were almost universally denounced as tone-deaf and pedantic (debating whether Cambridge Analytica’s access to Facebook’s user data should technically be classified as a breach or not). While there is some nuance to the situation, it’s clear that Cambridge Analytica’s use of Facebook’s user data was unethical and likely had at least some impact on the 2016 presidential election, and lawmakers in both the US and the UK are calling for investigations into the firm’s activities. This post attempts to dissolve the fog of uncertainty surrounding the situation.

What is Cambridge Analytica?

The genesis of Cambridge Analytica was to address the vacuum in the US Republican political market that became evident after [Mitt] Romney’s defeat in 2012…The Democrats had ostensibly been leading the tech revolution, and data analytics and digital engagement were areas where Republicans had failed to catch up. We saw this as an opportunity to leverage our international track record in global political campaigns to enter the political market in the US and address this need.

One of Cambridge Analytica’s professed specialties is in generating qualitative associations for users across various dimensions of their personalities called “psychographic profiles.” The efficacy and utility of psychographics is hotly contested within the marketing space; some marketers posit that psychography is nothing more than marketing alchemy. Cambridge Analytica’s CEO, Alexander Nix, claimed that at one point the firm employed 40 data scientists, 30 of which held PhDs.

How did Cambridge Analytica acquire data on 50MM users?

According to Christopher Wylie, the whistleblower who divulged the details of Cambridge Analytica’s activities to the press, Cambridge Analytica acquired the data it used to build psychographic profiles from a company called Global Science Research, which is run by a Cambridge University academic named Aleksandr Kogan. Kogan accumulated his data set via a Facebook app called thisisyourdigitallife, which was installed by approximately 270,000 Facebook users from the time it was launched in 2014 until it was removed from Facebook in 2015, when Facebook discovered that Kogan had been selling the data collected by his app.

The installation terms of the thisisyourdigitallife stipulated that the app would be granted access not only to the data of the users who had installed it but also to the data of those users’ friends. This is how, with only 270,000 installs, Kogan was given access to data for over 50MM users: for each install, GSR was granted access to not only data for the user that installed the app, but also data for all of their friends. It’s worth noting that accessing the data of users’ friends was not against Facebook’s terms of use at that time; the terms that Kogan contravened related to the re-selling of user data to third parties. As per Facebook:

Although Kogan gained access to this information in a legitimate way and through the proper channels that governed all developers on Facebook at that time, he did not subsequently abide by our rules. By passing information on to a third party, including SCL/Cambridge Analytica and Christopher Wylie of Eunoia Technologies, he violated our platform policies. When we learned of this violation in 2015, we removed his app from Facebook and demanded certifications from Kogan and all parties he had given data to that the information had been destroyed. Cambridge Analytica, Kogan and Wylie all certified to us that they destroyed the data.

This is the crux of the debate around whether this access to Facebook users’ data constitutes a breach or not. Since the user data — even the data from friends of the users that consented to the app install terms — was harvested via legitimate means as per Facebook’s terms at the time, it wasn’t technically a breach (which would imply a deliberate penetration of Facebook’s security systems, as in a hack).

Facebook's defense that Cambridge Analytica harvesting of FB user data from millions is not technically a "breach" is a more profound & damning statement of what's wrong with Facebook's business model than a "breach".

But nonetheless, even in the most generous interpretation of Facebook’s end user terms of service, it’s doubtful that most users knew that their personal data could be accessed via the installation of an app by their platform friends.

How were Cambridge Analytica’s activities relevant to the 2016 US Presidential Election?

In 2014, Robert Mercer, the billionaire Republican donor, invested $15MM into Cambridge Analytica by forming a joint venture — which he would own the majority of — with SCL’s election division. Mercer, a prolific backer of right-wing ventures, appointed Steve Bannon to this joint venture’s board; Steve Bannon was named as the CEO of Donald Trump’s presidential campaign in August 2016. Mercer is the primary financier behind Breitbart News, which Steve Bannon ran until January 2018.

In the last months of the campaign, the data team in Texas had over a hundred people, including data scientists, Web designers, graphic artists, programmers, copywriters, network engineers, “gun-toting elderly call-center volunteers” (as a Bloomberg article called them), and others working for us in the “nerve center” of his San Antonio office. Brad [Parscale, the head of the campaign’s digital marketing efforts] also had help from big tech and social media companies such as Facebook, Google, and Twitter. He figured that since the campaign was spending so much money with these firms — about $50 million each — the least they could do was send someone over to give the campaign a hand setting up and teaching them the platforms…Facebook would become our biggest fund-raising tool, bringing in some $250 million in contributions.

Misleading people or misusing their information is a direct violation of our policies and we will take swift action against companies that do, including banning those companies from Facebook and requiring them to destroy all improperly collected data

How did Facebook respond to the revelation of Cambridge Analytica’s activities?

Suspended by @facebook. For blowing the whistle. On something they have known privately for 2 years. pic.twitter.com/iSu6VwqUdG

What will happen now?

Congressman Adam Schiff, a Democrat representing California’s 28th congressional district and the ranking member of the House Select Committee on Intelligence, this weekend called for Alexander Nix to testify before their committee. Additionally, in reaction to this weekend’s revelations, Senate Democrats have called for Mark Zuckerberg, the CEO of Facebook, to testify before the Senate judiciary committee.

Facebook breach: This is a major breach that must be investigated. It’s clear these platforms can’t police themselves. I've called for more transparency & accountability for online political ads. They say “trust us.” Mark Zuckerberg needs to testify before Senate Judiciary.

The UK’s information commissioner has launched a probe into whether Cambridge Analytica illegally obtained the data it used to build profiles of users. And UK MP Damien Collins, chair of the committee investigating fake news, has called for Mark Zuckerberg (or a senior surrogate) to appear before his committee.

The UK’s Channel 4 News program announced yesterday that they will be airing a hidden camera undercover report from inside Cambridge Analytica’s offices, where a team of their reporters posed as potential clients.

In response to Channel 4 News’ hidden camera exposé, in which Cambridge Analytica’s CEO, Alexander Nix, proposed various forms of bribery as a service to a reporter posing as a potential client, Cambridge Analytica announced today that it has suspended Nix. Meanwhile, MP Damien Collins issued a formal request to Mark Zuckerberg to appear before his committee.

Facebook’s stock price has decreased dramatically since the Cambridge Analytica story broke and now sits at around $168, down about 9% from its close last Friday. 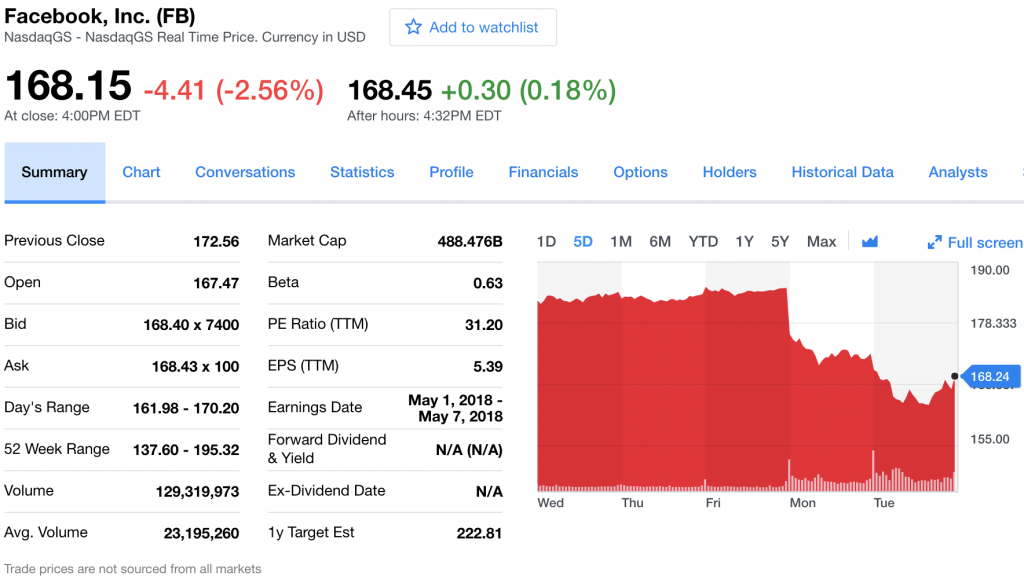