South Park set its sights on the freemium gaming industry in its November 5th episode, entitled “Freemium isn’t Free“. The episode — which was funny! — took a satirical jab at free-to-play gaming via a fictional title called “Terrance & Phillip: Give Us Your Money”, developed by the Canadian Department of Mobile Gaming (which, in the show, occupies a palatial administrative complex). The episode wouldn’t have been especially noteworthy relative to the rest of the season had it not received widespread media commendation for ‘exposing’ the psychological treachery of the freemium model.

In exemplifying the freemium gaming industry, South Park establishes a straw man in the form of the game at the heart of the episode: the goal of the game is to help develop Canada by way of collecting coins that allow the player to erect buildings on barren lots, a process which is partially facilitated by the purchase of in-game currency known as Canadough. At one point in the episode, the game’s namesakes, Terrance and Phillip, become uncomfortable with their likeness being applied to such a simple and shallow form of entertainment and complain to the Canadian Department of Mobile Gaming. The show’s B-plot unfolds in response to this, with the director of said department explaining the intricacies of freemium to the entertainers through a series of whiteboard diagrams. 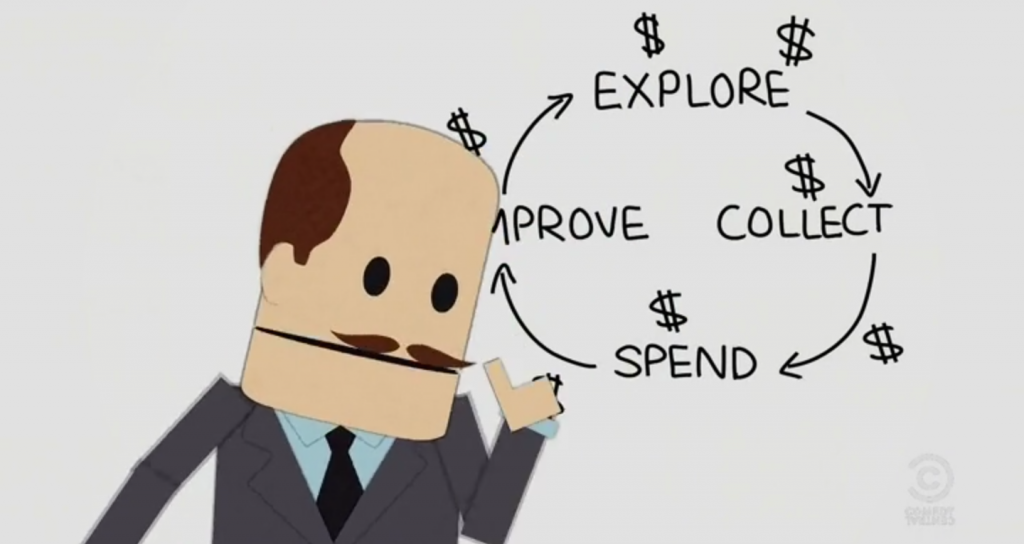 The whiteboard sessions, which most media outlets focused on following the episode’s airing, aren’t actually substantive arguments against the freemium model; for the most part, the whiteboard diagrams simply represent easily dismissed subjective judgments on freemium games.

In one whiteboard session, for instance, the game’s ill-intentioned developer explains how the use of Canadough obfuscates the real-money value of in-game purchases and therefore diminishes players’ inhibitions around buying things. But the use of in-app currency is a standard practice across many products (both freemium and non-freemium); Skype, for example, charges users for call time via Skype Credit, which must be purchased (upfront) in minimum $10 bundles. The purpose of Skype’s credit system isn’t exploitation but rather convenience; it prevents users from having to input their credit card details after every Skype-out call. 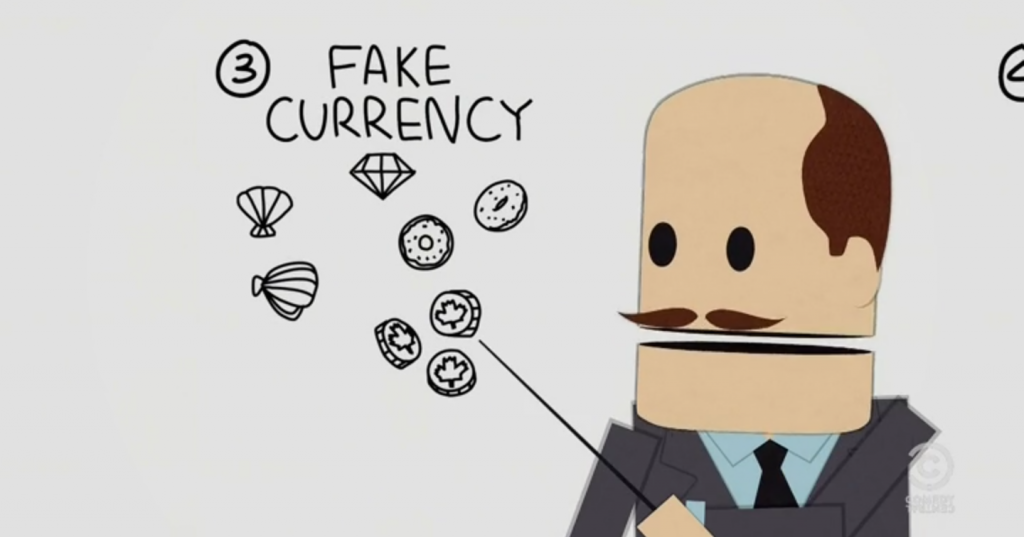 Another whiteboard session decries the fact that all freemium gaming profits are derived from a small minority of the user base — just 1%. 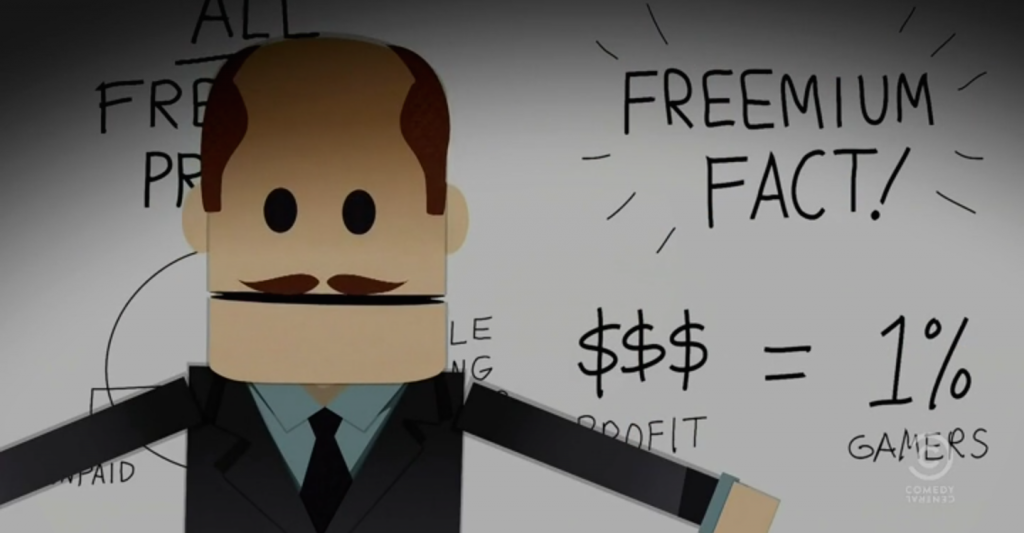 But this is freemium’s raison d’être; the entire point of freemium is to allow users to explore a product before committing money to it. Low conversion in freemium is a feature, not a bug, and, again, many other freemium, non-gaming consumer technology products have extremely low conversion rates. Evernote might be one of the most celebrated freemium products of all time, yet its most recently-published conversion rate was a mere 4%.

Ultimately, the whiteboard sessions parroted fairly vanilla gripes with the mechanics of freemium that don’t indict freemium games beyond being “not fun” as a function of personal taste. Where the show’s argument derails — and where most critiques of freemium gaming lose their intellectual momentum — is where it tries to draw a straight line between the people that spend money in freemium games and addiction. 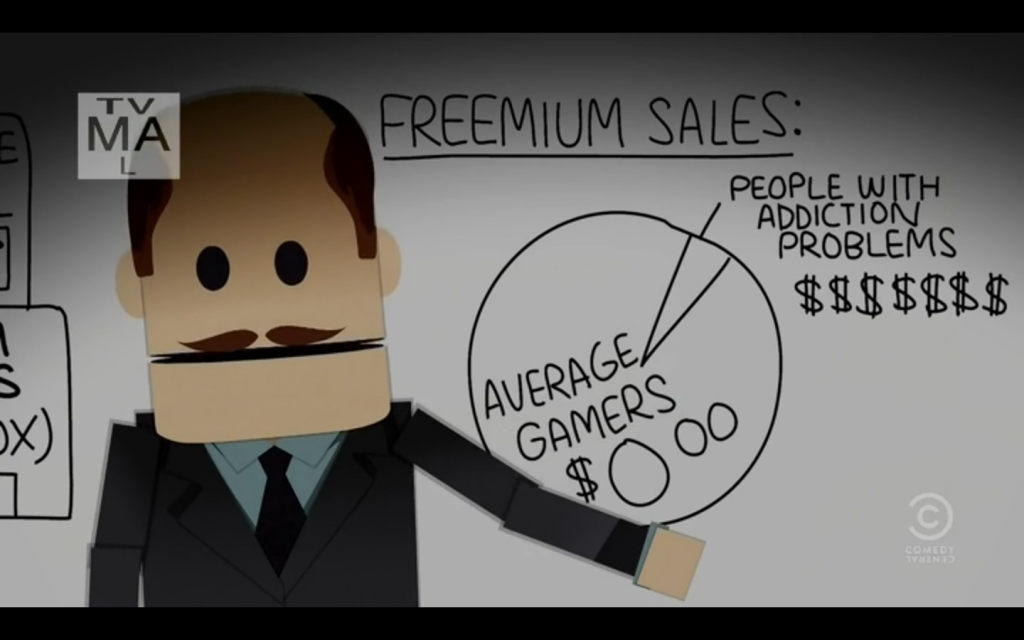 In the show, one of the main characters, Stan, ostensibly becomes addicted to the Terrance & Phillip game, inexplicably spending tens of thousands of dollars on Canadough though he openly admits that he finds the game mundane and repetitive. Stan’s father believes that his behavior is the result of a genetic vulnerability, and Satan later explains to Stan that his inability to stop playing the game — which he calls a “blatant Skinner box manipulation” — is due to his body’s inability to regulate its dopamine release function.

This is pop psychology at its worst, and, unfortunately, it forms the basis of the most popular arguments against the freemium model for gaming. The release of dopamine during gameplay is not a new discovery, and it is certainly not unique to freemium and / or mobile games. A 1998 study of brain chemistry during video game play sessions in the journal Nature found that video games instigate substantial dopamine releases in players, with “the brains of video game players [showing] a steady increase in dopamine levels during play, reaching about twice the amount of nonplayers. The gamers’s performance in the game increased linearly with the amount of dopamine present, achieving a factor of two improvement as well” (source).

Of course, freemium mobile games aren’t the only consumer products to have been proscribed as addictive via a nebulous, tenuous link to dopamine release. The UK’s yellow Daily Mail newspaper published a piece in 2012 claiming that cupcakes could be as addictive as cocaine, following a study which found that:

…when obese people and compulsive eaters were shown pictures of their favourite foods, a decision-making area of the brain called the orbital frontal cortex experiences a surge of dopamine. The same area is activated when cocaine addicts are shown a bag of white power.

Studies have shown brain chemical dopamine is at higher levels in those in love. Dopamine is key to our experiences of pleasure and pain, linked to desire, addiction, euphoria, and a surge may cause such acute feelings of reward that it makes love hard to give up.

Tests show that taking opioid drugs such as cocaine have a similar effect on dopamine as love.

When ‘Beliebers’ – as Bieber’s 44 million fans are known – listen repeatedly to his music, a chemical responsible for feelings of pleasure is released in their brains.

‘It triggers a rush of dopamine, the neurotransmitter stimulated by lots of other pleasurable activities such as orgasms or eating chocolate,’ Professor Levitin said last week.

The studies cited by the Daily Mail in the above examples aren’t damning revelations about cupcakes, love, or Justin Bieber; they’re simply descriptions of the human brain’s motivational system.

The true inspiration for South Park’s attempted take down of freemium games is perhaps revealed in the middle of the episode, when Stan asks his friends — iPhone-owning, Coloradan 4th graders — if the Terrance & Phillip game he’s presumably addicted to is “that much dumber than video games [they] play?”, to which they all respond with a resounding ‘yes’. Looking beyond the indefensible allegations of psychological manipulation, South Park’s principal grievance — and the principal grievance of most mainstream critics of freemium gaming — seems to be simply that freemium games deviate from what video games have traditionally looked like, and tradition is good.

This sentiment is articulated early in the episode when one of the developers of Terrance & Phillip (playing devil’s advocate for the show’s writing staff with an appeal to tradition) derides “past games”, which were distributed via a “Pay Money” and then “Enjoy!” model (neglecting the cases in which consumers paid money for games they didn’t actually enjoy, which is ameliorated with freemium). 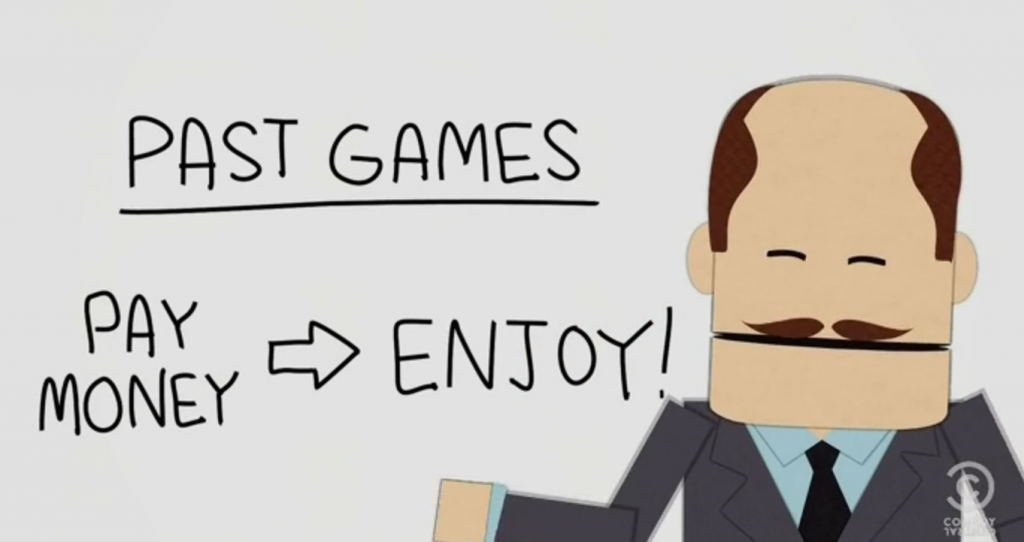 That the games that Stan’s friends like don’t resemble the Terrance & Phillip freemium game is not problematic for the freemium gaming industry, for two reasons. The first is that the Terrance & Phillip game, as a superlative straw man, doesn’t look anything like the games in the Top Grossing chart on the App Store. And the second, which is perhaps more profound, is that the next 1 billion people to play video games for the first time probably won’t look like Stan’s friends.