Advertising placements are getting bigger 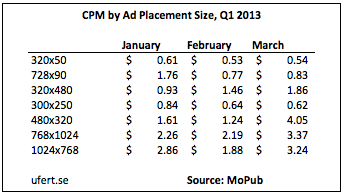 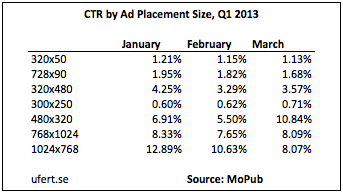 Facebook notably grew its mobile ad revenue in the first quarter of 2013 with the introduction of app install ads – which take advantage of a larger ad size – to 30% of total advertising revenue, up from 23% in Q4 2012.

Despite the improvement in performance, smaller ad sizes continued to dominate advertising spending on mobile in Q1, with 320×50 ad placements representing 53% of all ad spending on MoPub’s network in March. 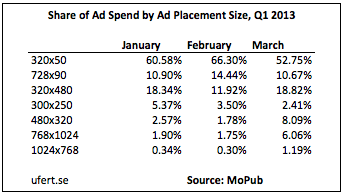 Ad network xAD reported strong growth in geo-precision targeting – ad targeting that takes into account basic elements of a user’s geographic position in serving ads – from Q1 2012 to Q1 2013. In Q1 2012, the share of ads on the company’s network taking advantage of at least the most basic geographic features stood at 91%; in Q1 2013, that share was 98%, with 58% accounted for by geo-precision targeting (which uses a more granular and sophisticated set of information to target ads to users).

Interestingly, the share of geo-precision targeted ads on the xAD network dropped from Q4 2012 to Q1 2013, apparently because Black Friday (the day after Thanksgiving) causes a surge in the amount of ads targeted through geo-precision (due to increased brick-and-mortar retail shopping).

MoPub’s report highlighted a number of price spikes around specific events in Q1 2013, indicating that advertisers were increasing ad spending in real time in response to externalities. Interestingly, MoPub revealed that ad prices increased dramatically during the massive snowstorm that befell the east coast of the United States between February 6th and 8th, perhaps because home-bound mobile phone and tablet owners had more time to spend on their devices.

Ads are getting smarter

MoPub revealed that the share of ads on its network utilizing rich media increased from 68% to 79% of spending from January to March of Q1 2013. This likely dovetails with the shift to larger ad sizes.

This phenomenon could also relate to the category of mobile websites that produces not only the greatest volume of ad impressions but also the greatest ad revenue: Music, Video, and Media. This category is perhaps more conducive to serving rich media ads, and audiences of these websites may also be more prone to engaging with rich media in the first place.

Gartner predicts that search ads will diminish as a share of total mobile advertising impressions through 2016 as inventory shifts to more engaging ad mediums – especially for paid app discovery — with the continued proliferation of smart phones.

iOS trumps Android and the shift to Asia

A second trend that seems unlikely to reverse course is the shift in ad spending to Asia, which already accounts for a greater absolute level of spending than in both Europe and North America. Gartner predicts that by 2016, ad spending in Asia will reach nearly $9.5 billion, with North America and Europe trailing at $8.9 billion $4.4 billion, respectively.