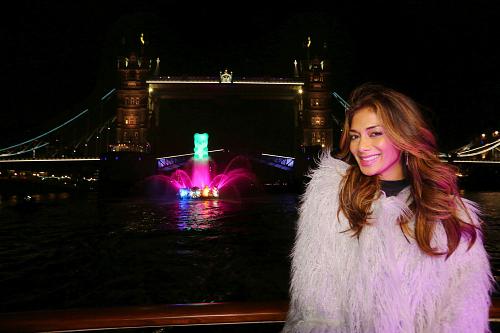 On Tuesday, November 11th, King Limited globally launched its latest mobile match-3 game, Candy Crush Soda Saga (CCSS). The game ascended the Top Downloaded charts worldwide almost immediately, reaching #1 in the US on iPhone the next day, thanks in part to a massive, multi-channel launch campaign that included publicity stunts in both New York and London, a saturation initiative on Facebook that reached 100 million people in 7 countries on the first day of the launch, a TV commercial that will run in 20 countries up through Christmas, and outdoor ads aimed at commuters in select cities. 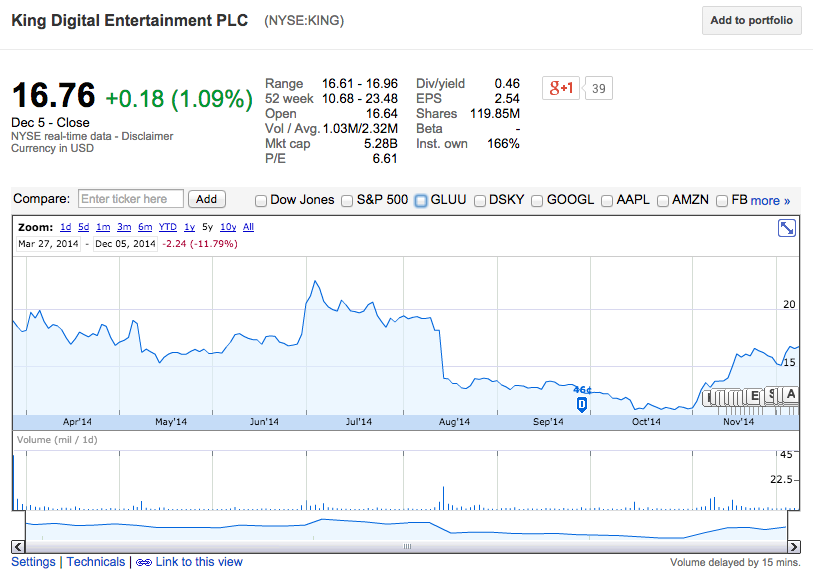 King’s stock price has climbed steadily upward since the launch of CCSS, having increased by 21% since November 11th to $16.76 at the time of this writing. The launch of CCSS is an important milestone for the company: King had already proved with games outside of the Candy Crush universe — such as Farm Heroes Saga, Bubble Witch 2 Saga, and Pet Rescue Saga, which are, at the time of this writing, at positions and #12, #21, and #25 on the App Store’s Top Grossing chart (US / iPhone), respectively — that it can create successful mobile gaming franchises independent of Candy Crush. In doing so, King has partially allayed fears that its revenues are overly reliant on Candy Crush Saga, which has consistently occupied top positions on the worldwide Top Grossing charts on both the App Store and Google Play since its launch in 2012. When the company went public in late March 2014, Candy Crush Saga represented 78% of its gross bookings; by its last earnings statement in early November, that number had declined to just 51%.

But since its IPO, King has yet to create another global megahit game of the same magnitude as Candy Crush, which is most likely the reason its stock has only briefly exceeded its debut price of $19. King is almost a victim of the high water mark it set with Candy Crush Saga; by any reasonable standard, many of the games in its portfolio are hits. Although King’s revenues have declined over the past year — it announced a year-over-year decline in both gross bookings (-16%) and adjusted EBITDA (-26%) in its last earnings call — the company has increased the size of its overall user base across a robust portfolio of mobile games (in the same earnings call, King announced a year-over-year increase in DAU (+26%) and MAU (+37%)), all while stockpiling nearly $1BN in cash.

At first blush, CCSS might seem to be an attempt by King to leverage the Candy Crush brand into another megahit, hopefully convincing investors along the way that the company is capable of routinely creating global Top 5 grossing games. It also appears to be an opportunity to extend the lifetime of the Candy Crush brand, to re-engage lapsed Candy Crush users with new content, and to retain valuable veteran Candy Crush players by ushering them into a new property without losing them to competitors (similar to what Supercell seems to have done with Boom Beach).

King is undoubtably doing all of these things with CCSS, but it is also doing something else: it is aggressively cross-promoting non-paying CCSS players into its other games through frequent and highly-visible ads for them. 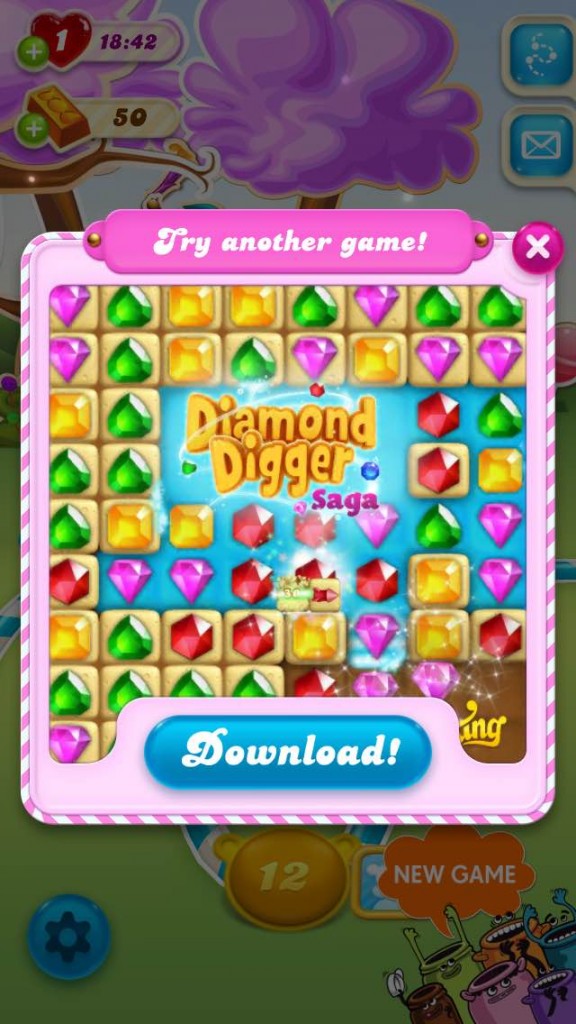 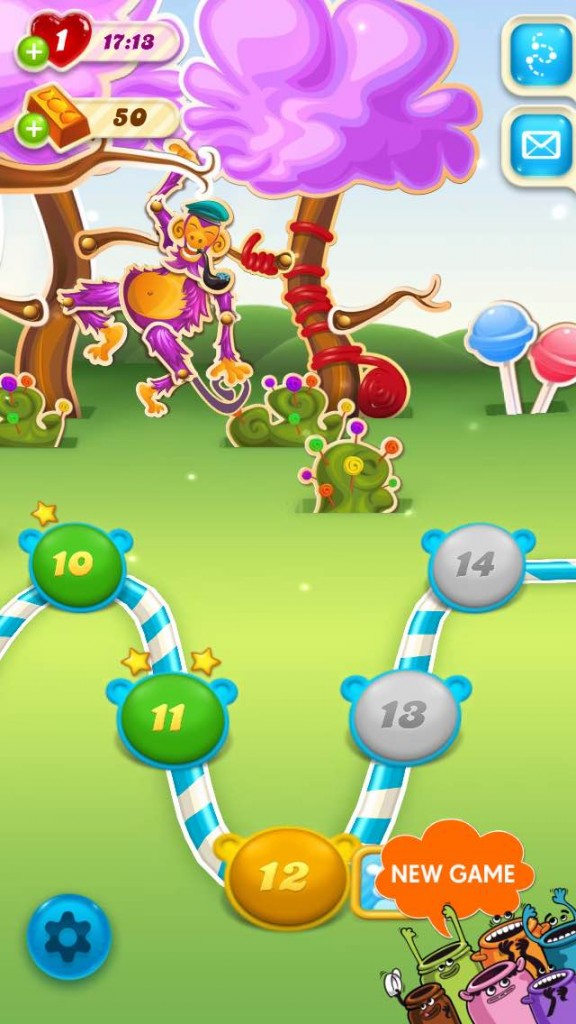 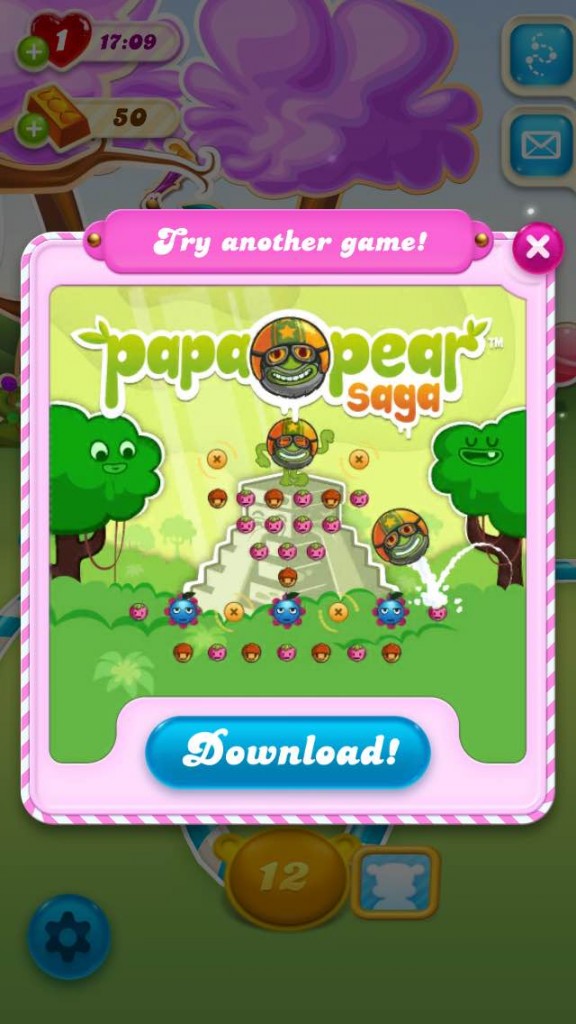 Level 12 can be reached in about 30-45 minutes of gameplay; by the third time I played through the first world, I was able to complete it in my first session (ie. without depleting my 5 lives and having to wait for lives to recharge). Such an aggressive cross-promotion strategy — to reach non-payers within the first hour of gameplay, and possibly even in the first gameplay session — reveals another dimension to King’s CCSS strategy: to use the massive gravitational pull of the Candy Crush franchise to boost the user bases of its other (even much less successful) games.

This is an interesting strategic application of portfolio theory; through CCSS’ success, King can not only prove that it is capable of creating megahit games (albeit after lavish spending on user acquisition and brand marketing campaigns), but it can at the same time diversify its user base — and revenues — through systematic cross promotion and yield management. It’s worth noting that King, famously, stopped advertising other games in mid-2013; the company’s aggressive cross-promotional tactics seem to be a testament to the fact that it is dedicated to long-term revenue diversification.