App store winners and losers: An interview with Think Gaming 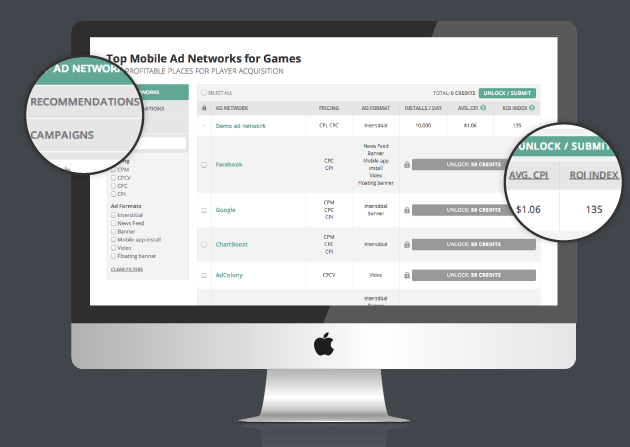 Think Gaming, an app store analytics company and member company of the most recent Y Combinator class, recently unveiled its Top Networks product, a curated list of mobile advertising networks, filterable by region and perceived quality. In this brief interview, Think Gaming’s Tim Ogilvie reveals his thoughts about the evolution of the app store and the mobile marketing landscapes.

Mobile Dev Memo: To my mind, 2013 was the year in which mobile gaming bifurcated into the giant winners (the games making hundreds of thousands to millions of dollars per day and dominating the Top Grossing charts) and the relative losers (games making very little daily revenue and probably not able to profitably spend money on marketing). Your Top Grossing games data seems to support that; the distribution decreases rapidly as the top grossing rank descends. Why do you think that is?

Think Gaming: We’ve seen the same thing. Free to play games look like a lot of other hits driven business where winners earn exponentially more than losers. You see a similar dynamic in music, movies, console games, web site usage, etc. I’m not sure I know exactly why this happens, but I wouldn’t bet against it changing.

Framed differently, though, there are 50-100 games that gross $10 million+ annually. Any of these would be called hits in another industry and can support development teams who are creating the next big thing.

MDM: You probably can’t reveal everything, but what inputs are most important in your calculation of daily revenue?

MDM: What should investors be looking for in potential investments that have already soft launched? Which metrics are the most indicative of commercial success?

TG: Retention is far and away the most important metric. Lots of things can be fixed and best practices to be used. But if users don’t keep coming back to play the game obsessively, it’s not going to be a hit.

MDM: There was a debate about a year ago over whether VC financing makes sense for games companies; I argued at the time that it does. Do you think that has changed in the year that has passed?

TG: Each side of this debate probably has the same stance. There have been some great exits in the past year from the big hits. But the jury is still out on whether any enduring companies have been created. No one has (yet) demonstrated an ability to repeatedly produce hits or established the type of franchises that fueled console success.

MDM: How much do you think it’d realistically cost an indie developer to build a product that is investment ready (in terms of being able to generate consistent, reliable, and investable metrics in soft launch)?

TG: Kristian Segerstrale estimated it at roughly $1 million: $500k to build a game and $500k to market it. That’s out of reach for one developer in a garage, but perfect for an experienced team that’s seed funded. There are examples of even bigger budgets (e.g. Hammer & Chisel, Super Evil Megacorp, Supernauts) but it’s not clear the incremental development budget delivers outsized returns.

MDM: Your goal seems to be to commodify app store data. How do you think the bigger developers are using this data (from their own apps) as a competitive advantage now?

TG: We think there will be two kinds of gaming companies in the long run: a handful of very large players and lots of independent teams building the next great game. Today’s biggest players use their mega-budgets to get visibility into the most effective marketing channels. This lets them get big fast and use data-driven player feedback to improve.

We give the same visibility to games that don’t have King- or Supercell-sized budgets. This is incredibly important data to compete, so we’ve seen a great response.

MDM: The majority of Think Gaming’s founders have backgrounds in online advertising. What do you see as the biggest obstacles mobile gaming companies face in marketing their products?

TG: It costs too much money to figure out what works and the revenue from a typical game doesn’t justify that investment in learning. By the time a game spends enough money to understand the landscape, it’s already in decline. As costs rise, this just gets tougher.

MDM: How do you think mobile games marketers can use Think Gaming’s data in their work?

TG: We help marketers find the most effective places to get app installs. Games can get big fast without wasting spend on unqualified audiences. When we combine our planning tools with our market data, marketers will be able to see where they can expect to rank for a projected marketing spend.

MDM: Do you think online display advertising is fundamentally and structurally more sophisticated — in terms of both the marketplace and the tools available to marketers — than the mobile advertising space?

TG: Mobile marketing is predominantly direct response with a single objective: app installs. That makes the equation simpler. Display is complex because marketers objectives run the gamut from branding to lead generation to e-commerce.

MDM: Given platform idiosyncrasies and device fragmentation, do you think it’s possible that mobile advertising can reach parity with online display advertising?

TG: We don’t think mobile and display will “converge”, but each will develop in a unique way. Gaming advertisers and the apps who dominate mobile usage will drive most of this change in the short-term

MDM: Do you think the dynamics of the current mobile marketing ecosystem are sustainable? In what ways do you see things changing in the next 12 – 24 months?

TG: Some things feel very sustainable. For example, most of the advertisers we know invest $1 in marketing to earn $1+ in lifetime value. And I think LTVs are going to keep increasing. US consumers are just getting comfortable with in-app purchases. Markets where the paradigm is more established have much higher LTVs.

On the other hand, the marketing landscape is a mess. There are too many middlemen, too many ineffective solutions and lots of unsubstantiated promises. Transparency can be a major catalyst here, so we expect things will change in the next few years.