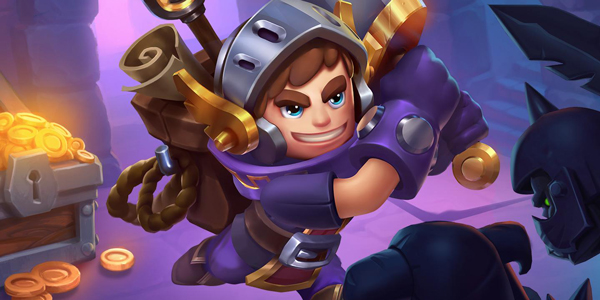 Nonstop Knight is a free-to-play mobile game developed by Kopla Games and published by Flaregames in which the player’s avatar (the eponymous Knight) descends through the levels of a dungeon, killing creatures and collecting loot along the way.

The game was released in early June 2016 and fuses gameplay elements from the dungeon crawler and clicker genres: the Knight is autonomous, identifying and killing creatures — in other words, playing the game — on its own, with the player responsible for making equipment upgrade decisions, selecting special abilities, and choosing when to fight boss monsters. While operating on his (or her; the Knight’s gender can be changed in the game settings) own, the Knight continues to collect resources from slain dungeon creatures; these rewards are presented to the player upon their next login. 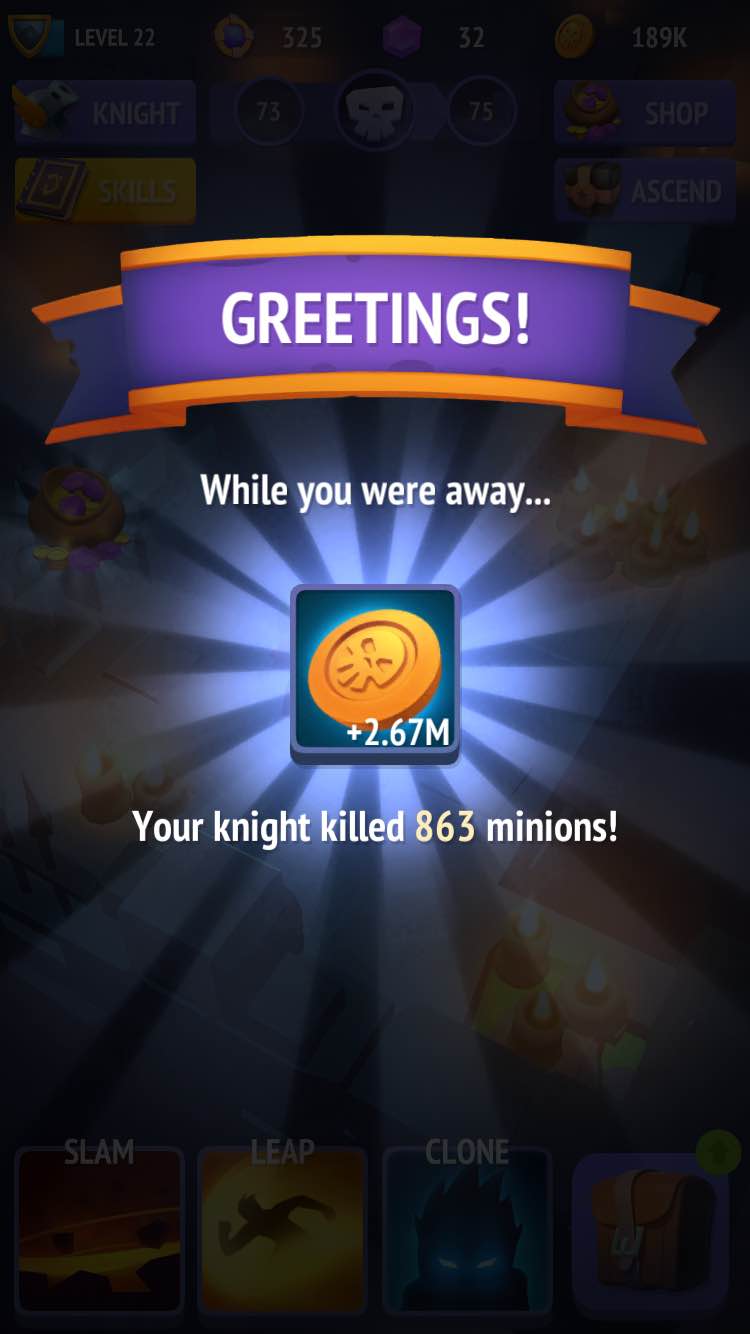 As would be expected in a free-to-play game, as the Knight progresses ever deeper into the bowels of the dungeon, the costs of acquiring the items he needs to defeat his enemies increase dramatically. This article does a very competent job of describing the progression loop in Nonstop Knight, and so that won’t be recapitulated here except to highlight two points:

– The Knight faces a “boss” on every third floor which must be defeated when the player is “driving”. In other words, the Knight can only advance two levels on its own; to progress further, the player must open the app and defeat the floor boss;

– The player can “ascend” to the very top of the dungeon and start over every so often. Doing so relieves the Knight of all of the gear he has accumulated in his journey but doesn’t reset his abilities or skills, meaning he’ll have an easier time progressing through the dungeon again until he reaches the floor he previously ascended from.

This is where the game’s soft currency economy becomes relevant. Progress grinds to a halt at some point in the Knight’s journey because weapon upgrade prices increase at a much greater rate than do the rewards from killing creatures (or found in the random loot drops throughout the game). There is no energy gate in Nonstop Knight, but slowed progress means the player has nothing to do in the game except spend currency to upgrade the Knight’s weapons every so often until he is powerful enough to face the floor boss. 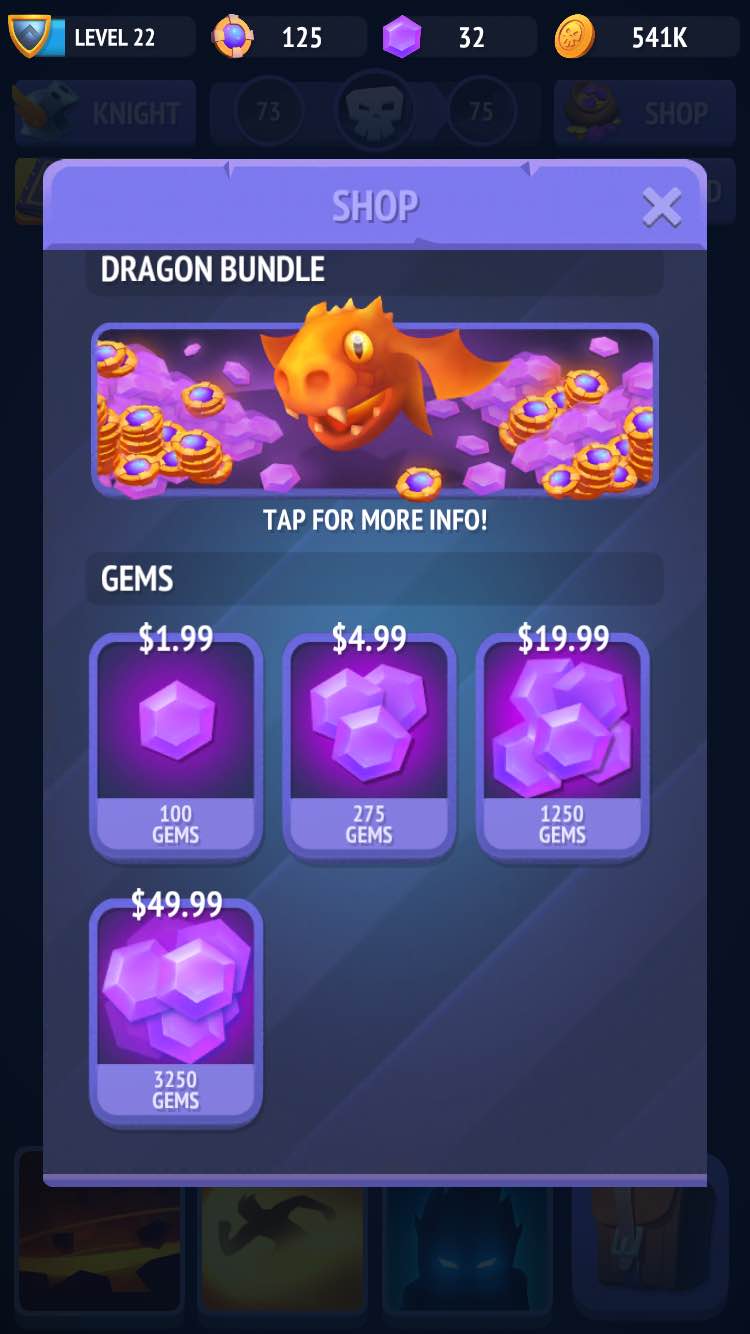 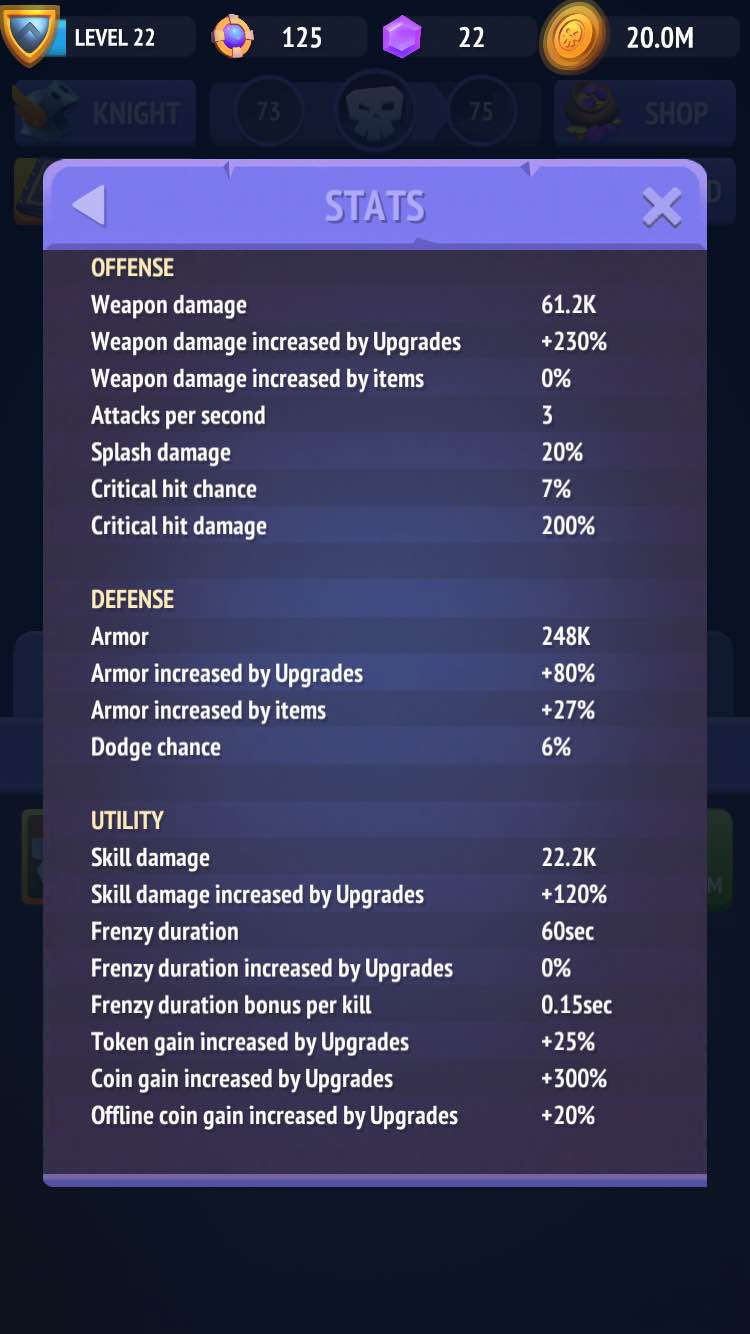 Only gems are available for purchase as IAPs in Nonstop Knight. Progression in the game is a function of the Knight’s gear as well as his stats, and coins and tokens (as well as some consumables) are lavished on players generously as video ad rewards every three hours. 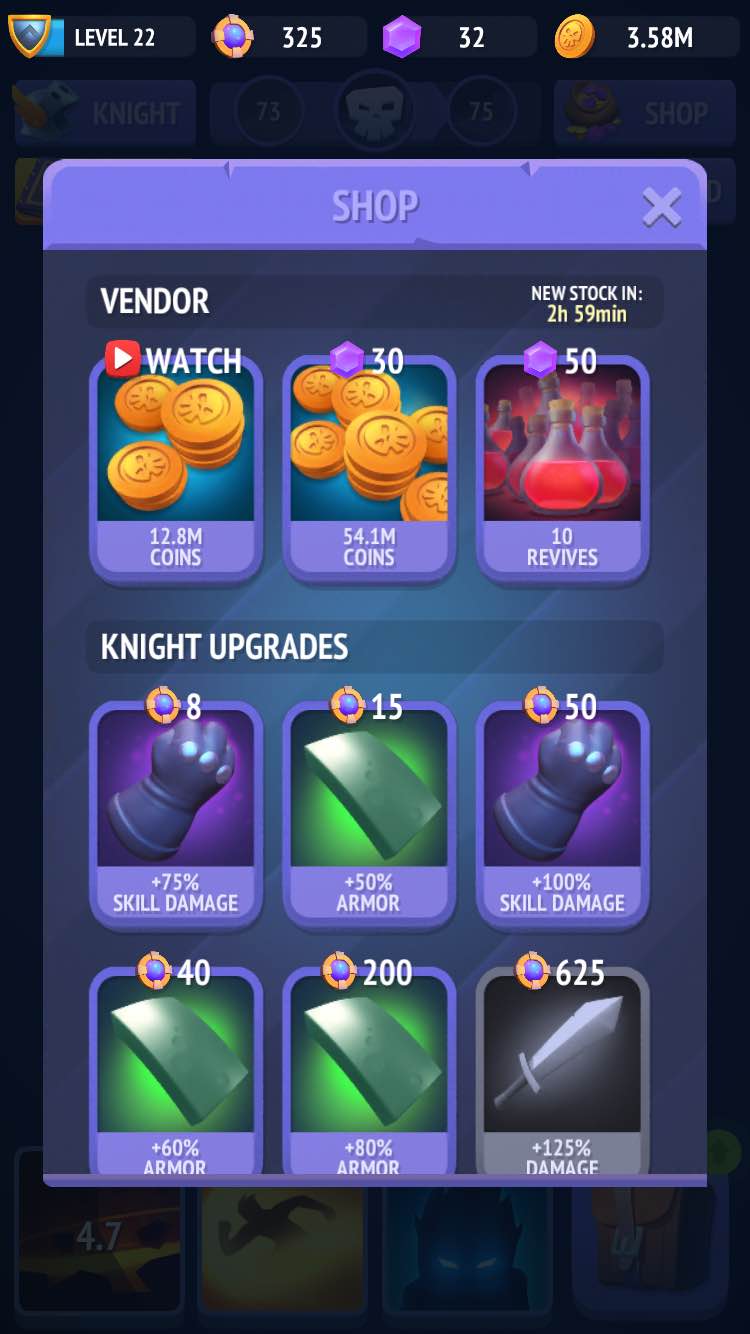 And so progression in Nonstop Knight, rather than being strictly driven by IAPs or constrained by an exponential upgrade cost curve, is also very much tied to the video ad reward schedule: every three hours, the player can collect a video reward and upgrade their Knight to a level that moves them closer to being able to compete with the floor boss, which in turn fulfills their gameplay obligation until the next floor boss is reached by the autonomous Knight.

Indeed, the IAP catalogue in Nonstop Knight seems almost perfunctory; a nod to the fact that the game is free-to-play but not an aggressive attempt to generate revenue. In this sense, the game is similar to Crossy Road, which employs a soft touch on IAP monetization and tries to nudge players toward watching rewarded video ads.

As the ostensible driver of the in-game economy, video ads are integrated in a fundamental way into Nonstop Knight: made available on a three-hour timer, they were probably designed to impact session pacing, in which case much of the thought put into how a player progresses in the game was predicated on the schedule of video ad reward availability. Rather than being shoehorned into the game in a way that doesn’t impact the real game economy, as many developers approach video ads, video ad rewarding seems to be a very important component of Nonstop Knight’s economy.

Which begs the question: what is the revenue potential for a game that puts so much emphasis on video ad monetization? Crossy Road somewhat famously made at least $3MM in revenue (30% of total) from ad monetization in its first 90 days after launch, although that game was a viral phenomenon and reached a Top 10 downloaded position overall (US / iPhone) in its first week of launch. Nonstop Knight didn’t experience the same surge in early launch installs: the game peaked at #37 overall (US / iPhone) upon launch and has since dipped below the top 1000.

Within four days of release, Flaregames announced that Nonstop Knight had generated 2MM installs, with that number having risen to 4MM about one month later. Based on this, using some very rough assumptions, Nonstop Knight might be making around $10k per day in ad monetization. If the ratio of ad revenue to IAP revenues is similar to Crossy Road’s, the game could potentially be on a $1MM monthly run rate in overall revenues.

For a freshman release from a small team based in southern Finland, this represents a substantial success and a lesson for other developers on alternative approaches to monetization.