The rise of the phablet 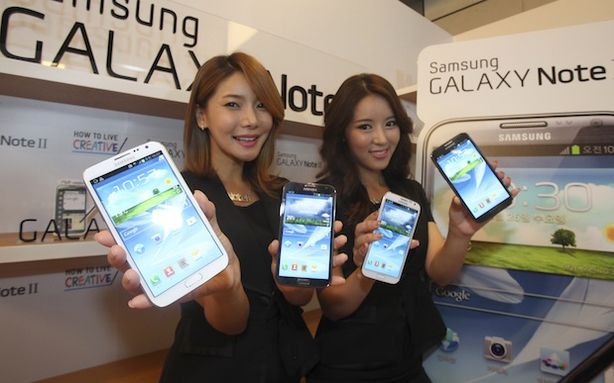 On July 25th, IDC revealed that global tablet shipments had decreased by 1.5% from the previous quarter, due in large part to weak iPad sales (Apple shipped 13.3MM iPads in Q2 2014, representing a nearly 10% year-over-year decrease).

In May, IDC identified two primary reasons for decreasing projected tablet sales: longer than initially predicted upgrade cycles, and a shift in consumer tastes towards phablets, or large-screen (usually defined as between 5 and 7 inches) phones. From IDC’s press release:

“Two major issues are causing the tablet market to slow down. First, consumers are keeping their tablets, especially higher-cost models from major vendors, far longer than originally anticipated. And when they do buy a new one they are often passing their existing tablet off to another member of the family,” said Tom Mainelli, Program Vice President, Devices & Displays at IDC. “Second, the rise of phablets – smartphones with 5.5-inch and larger screens – are causing many people to second-guess tablet purchases as the larger screens on these phones are often adequate for tasks once reserved for tablets.” 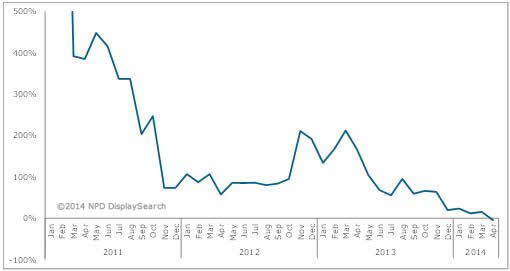 Slowing growth in tablet shipments seems to be met with increased shipments of phablets; Juniper Research predicts that phablet shipments will reach 120MM by 2018, up from just 20MM in 2013. In the first quarter of 2014, 30.1MM phablets were shipped, representing 10.5% of smartphone market share. Business Insider Intelligence predicts that by 2019, that market share may jump to nearly 60%, with phablet sales eclipsing tablet sales by a factor of 3 to 1. 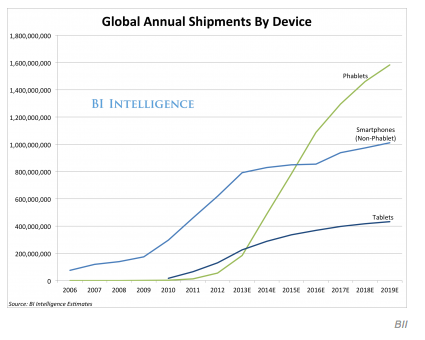 Apple is participating in this trend: the company’s upcoming iPhone 6 will feature two screen sizes of 4.7” and 5.5”. A 5.5” screen is significantly larger than the 4” screen of the iPhone 5S; this video emulates the iPhone home screen on devices with various screen sizes, ending with a comparison of the current iPhone 5S and a Samsung Galaxy Note, which has a 5.7” screen. 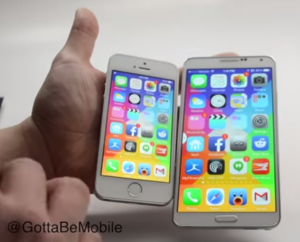 The consumer shift from tablets to phablets is probably a good thing for app developers. The tablet use case is fairly narrow: in the home, often as a second screen while watching TV, and for longer usage sessions. But monetization on tablets is markedly higher than on smartphones; according to analytics firm Distimo, app store revenue generated by iPads is nearly at parity with revenue generated by iPhones in the US despite the fact that sales of the latter are nearly 3x those of the former on a quarterly basis. 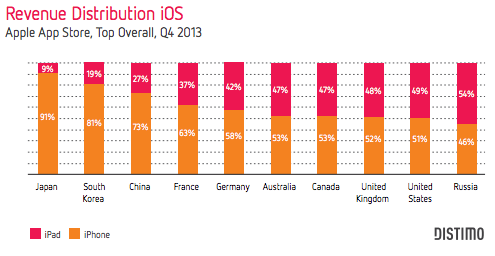 Similarly, ARPD (average revenue per device) is higher for iPad than iPhone – in many cases, substantially higher – in every major app store geography. 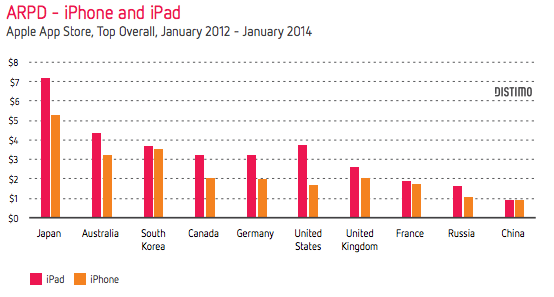 If the phablet can capture the ubiquity of the smartphone (a 2013 survey conducted by IDC found that 79% of smartphone owners in the US carried their phone with them at least 22 hours per day) while retaining the monetization patterns of tablets, the rise of the phablet could represent a boon to app developers (and especially game developers) hoping to increase average, per-user revenue levels.

This potential outcome is interesting in light of two recent revelations that cast a worrying shadow over the sustainability of the app ecosystem. The first, from advertising network Fiksu, is that per-user marketing costs reached an all-time high in June. The second, from attribution firm Adjust, is that 80% of apps in the App Store are “zombies”, unused and nearly undiscoverable by users. These two pieces of information point to an essentially broken economy, with a revenue distribution that punishes all but the largest apps. According to Developer Economics’ Q3 2014 report, the majority of app developers operate below the ‘app poverty line’ of $500 per month.

The rise of the phablet might be the kind of endemic shift the marketplace needs to render the app economy viable. “Fixing” app discovery may be an impossible task, since, from the perspective of the consumer, app discovery is not broken; only developers feel that pain, and thus the only means of reversing the average global CPI > LTV spread may be to increase average monetization rates. If phablets truly do ultimately cannibalize tablet sales but manage to supplant smartphones as primary personal devices, that might happen.