Why is Supercell worth billions? They’re better than everyone else 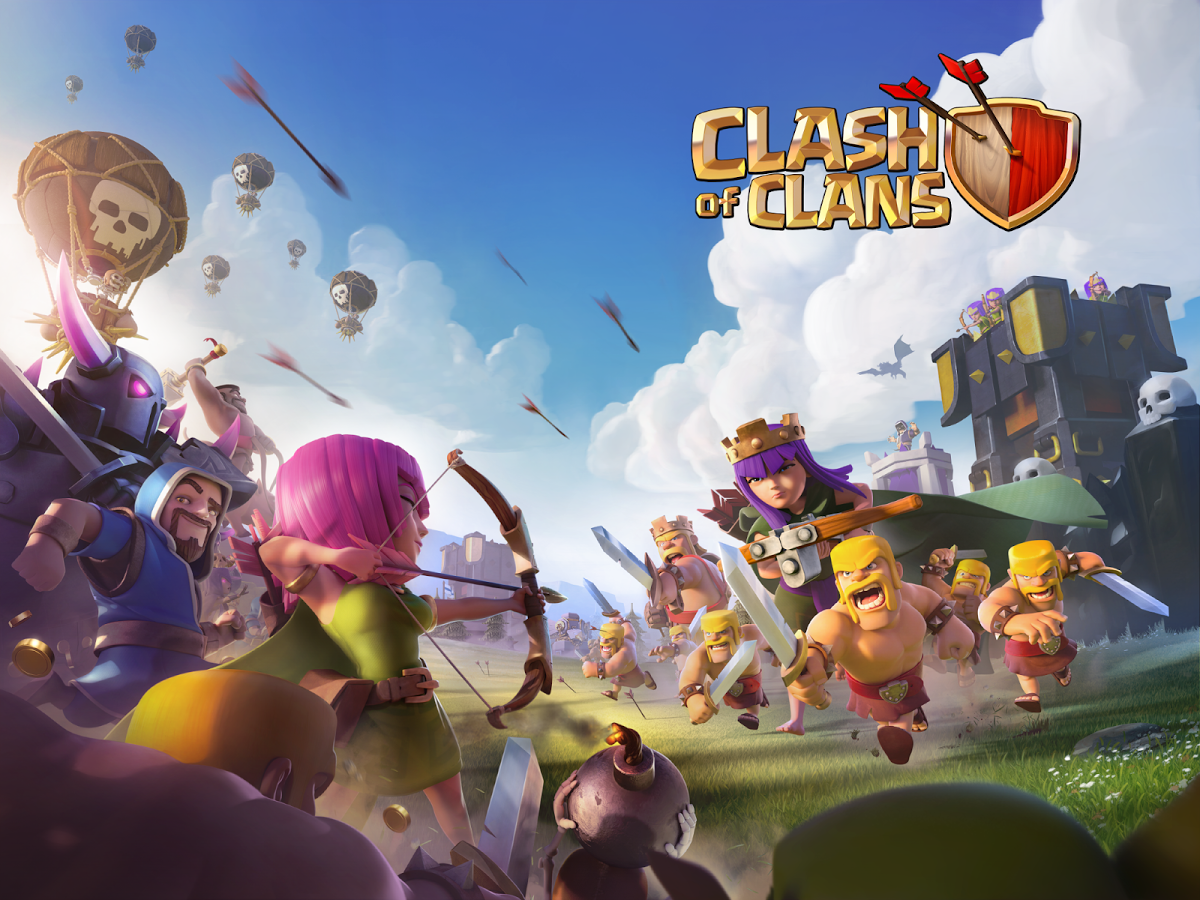 (Editor: This is a guest post from mobile marketing expert Michael Velkes)

Last week, the chorus of rumors that Chinese technology behemoth Tencent is in talks with SoftBank to buy its 73% stake in Finnish gaming company Supercell at a valuation of more than $9BN grew louder and more credible. SoftBank bought a 51% stake in Supercell in October 2013 at a valuation of slightly over $3BN and increased its stake in the company by around 23% in June 2015 (at an undisclosed price).

If SoftBank’s sale of its interest in Supercell closes this week at the rumored (yet wholly believable) ca. $9BN valuation, it will mean that Supercell has created around $6BN in enterprise value in under 3 years on the back of just two new releases in that time: Boom Beach (which went into soft launch one month after the initial transaction with SoftBank) and Clash Royale.

Although Supercell is not a publicly traded company, it is obligated by Finnish law to make its financial statements public. When Supercell published its 2015 results this year, the entire mobile gaming industry was astonished: the company generated $2.3BN in revenues and nearly a billion dollars of EBIT, all with fewer than 200 employees.

These are impressive numbers in all matters, but not so much for the followers of Supercell, a company that puts emphasis on disruption, innovation and creativity as a culture. In this article, I lay out my personal thoughts for how Supercell’s culture and approach to game development have created the conditions for such incredible success to be achieved. 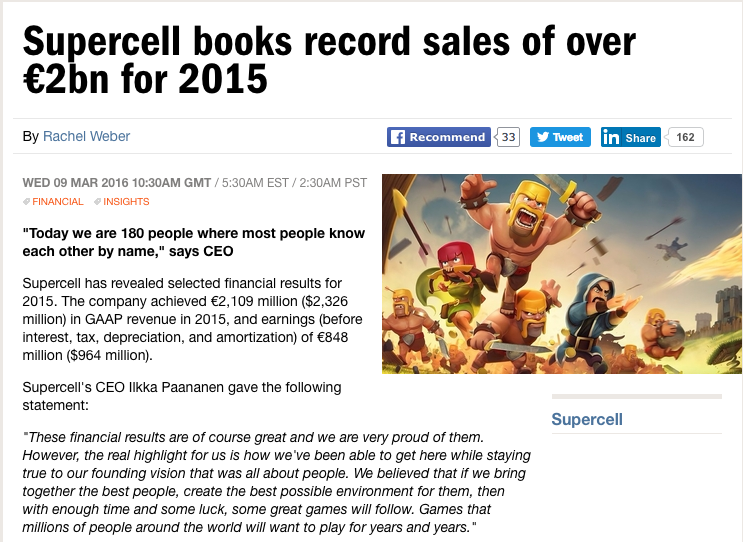 In today’s fast-paced and rapidly changing mobile ecosystem, bigger is not better, as large teams don’t necessarily reduce production times and adding headcount doesn’t result in a commensurate increase in output and productivity. Team communication counts! As does agile analysis. And with big teams these things can be very difficult to get right.

Tribes, or “cells” as Supercell terms its product teams (hence the company’s name!), are borne from an organizational structure in which each game has its own set of dedicated, decentralized roles, free from distraction. This type of structure allows the teams to be dynamic in order to experiment on features which can add tremendous value to the final product, but it also allows the small, autonomous teams to quickly recognize when features or projects don’t work and stop development on them.

Performance is not all about CPI

Supercell pioneered Mobile games TV ads, going “all in” for the Super Bowl in 2015 with a $9MM commercial, a move that has validated this industry as a key player in the advertising world. From my perspective, Supercell were the first ones that looked at a mobile title and saw a product, not a digital game for mobile devices.

Mobile gamers are mostly women and MMO gamers are mostly men. So how do Supercell games achieve mainstream popularity? In considering Summoners Wars, Brave Frontier, VainGlory, Game Of War, Mobile Strike and many more of the titles with which Supercell’s compete, one would be inclined to say that they are male-oriented products.

But when you look at and play Clash of Clans, Boom Beach or Clash Royale, you feel something different: the colors are whimsical, the story is fun, the pop-ups are joyful, and the full experience is just built for both genders. If you try and find another innovative game company that creates niche games for mainstream audiences, you will need to look deep in the crowded market and I’m quite positive you will not find one.

Organic Growth through engagement: My Clan, My Life

Today, without organic installs, apps cannot stay above water. The only reason a mobile game player will invite his friend into an app today is if he needs his friends to join his game experience in order to continue playing and evolving.

Today, a viral app will become viral when a conversation about it moves to the offline space, often through the increasingly ubiquitous use of messaging apps. Looking at the “clans” system in Supercell games, you understand that this is a spectacular means of moving this conversation into the offline space and making friends join forces to play for shared, mutual goals.

With respect to its advertising creatives, Supercell’s celebrities, storylines, graphical fidelity and tone, and concepts are always one step ahead of its competition.

From Liam Neesen playing Clash of Clans in a coffee shop to Christopher Waltz reading a bed-time story about a battle; from its amazing Instagram content to its outstanding art that has obviously been meticulously poured over until perfection was reached, Supercell’s ad creatives are audacious and amazing. And it is for this reason that following the company’s social media channels is inspirational rather than transactional.

Supercell’s aggressive marketing campaigns, polished and unique products, and innovative development approach is what makes the company the leader in the fast growing mobile gaming industry. So yes, $2BN in revenue is impressive, but more impressive than its revenue metrics is the dynamic workbook that Supercell has crafted from which all developers can learn and draw inspiration. 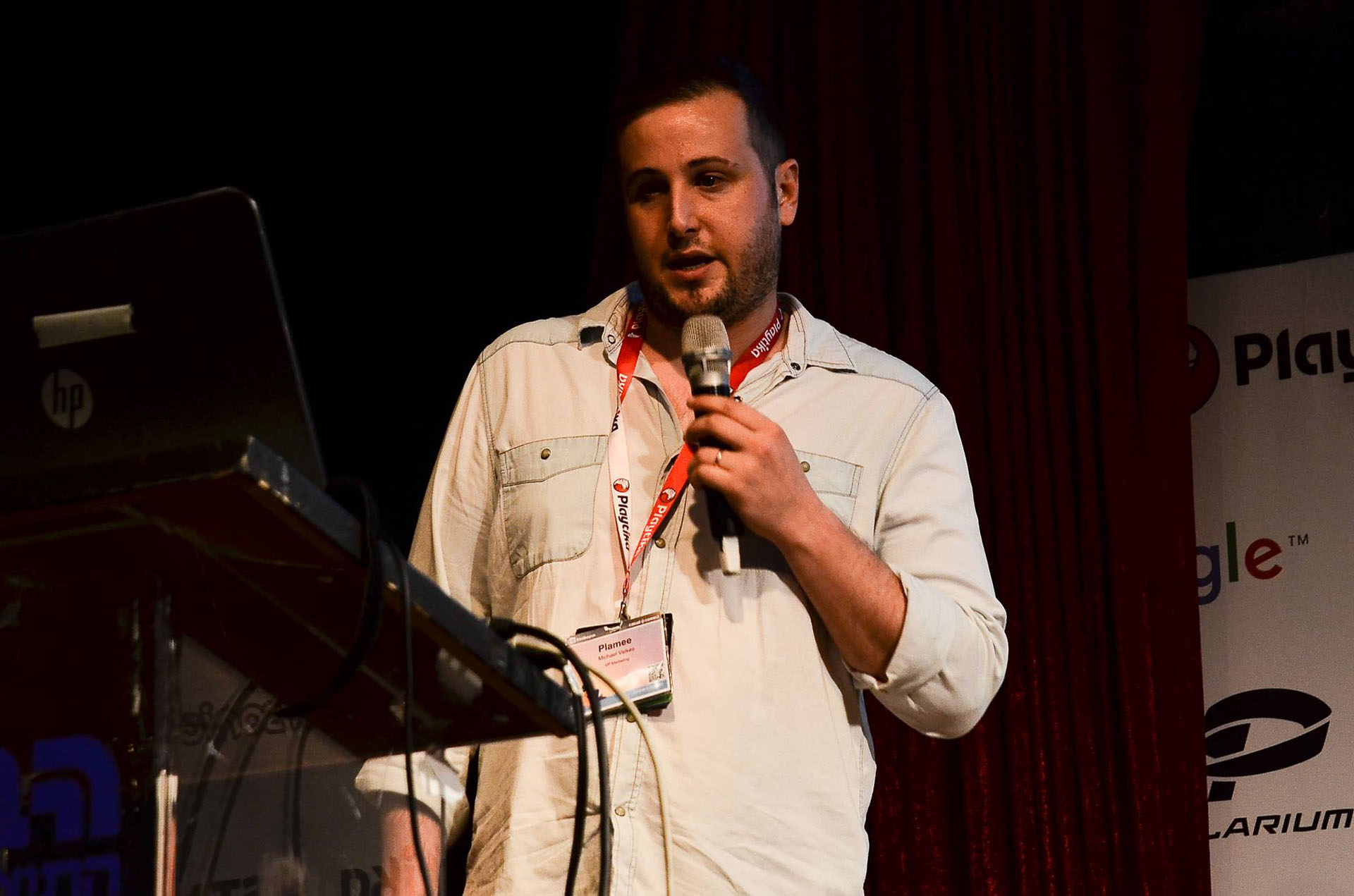 Michael Velkes is active in more than 5 different mobile gaming studios, serving as CMO and Executive Producer. With over 7 years of experience in mobile gaming, Michael has executed growth in many sides of the Eco system, especially while leading all marketing and growth efforts at Jelly Button Games as well as today acting as advisor to companies such as Planet of the Apps, Tacticsoft, Monster Brain Studios and more.