The problem with app store distribution in 3 charts 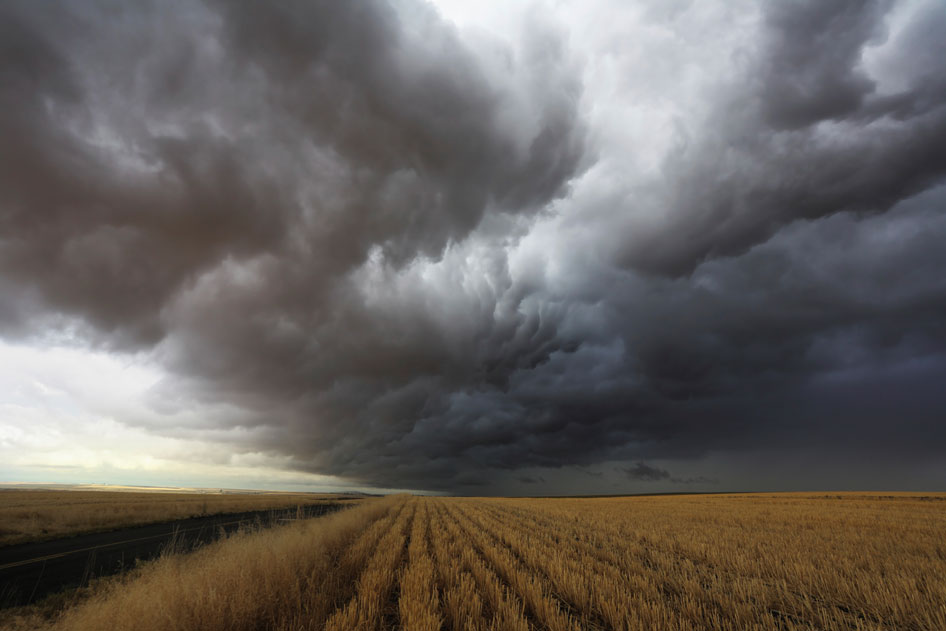 Last week, Comscore released its US Mobile App Report, a comprehensive analysis of app usage in the United States. At a general level, the report highlights the continued shift in consumer digital media engagement from the desktop and mobile web to mobile apps and paints a relatively optimistic picture of the mobile ecosystem:

But one subtextual theme present throughout the report casts a bleak pall over the prospect of app store distribution becoming less concentrated in the hands of the largest developers. Three charts in the report describe a winner-take-all app ecosystem in which the winners have already become apparent.

1. Just four companies own apps that generate 70% of the unique visitors to the Top 25 mobile apps 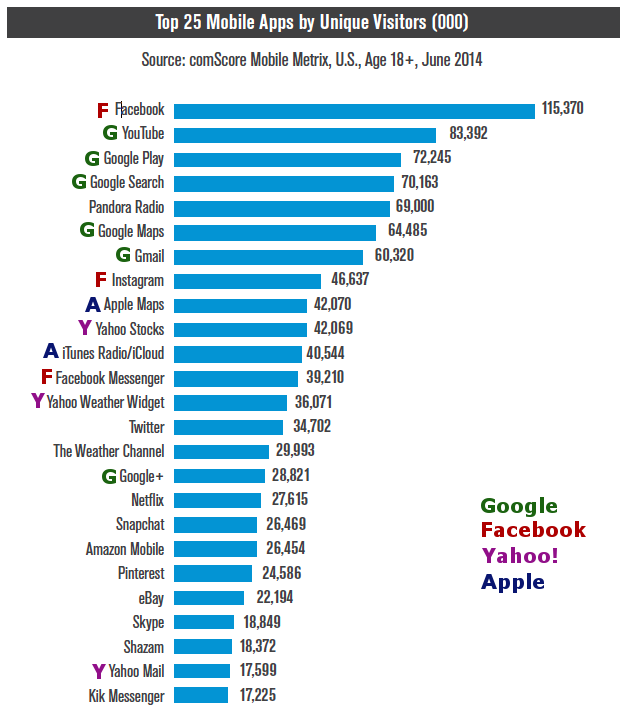 Apps owned by Google, Facebook, Yahoo! and Apple receive 71% of the unique visitors to the Top 25 mobile apps. This kind of viewership concentration presents obvious competitive challenges to smaller developers: launching new apps into relative prominence is far easier and less expensive for a developer commanding a substantial existing user base.

One example of this phenomenon – wherein a developer can cross promote its existing user base into a new app, propelling it into the top downloaded platform charts – is Facebook’s messenger app. Messenger was released as a stand-alone app for iPhone in August of 2011, although the Facebook iPhone app retained messenger functionality. But in late July 2014, Facebook forced users to migrate into the stand-alone messenger app for communication; as a result, the app quickly ascended the Top Downloaded chart and, as of this writing, holds the #1 position. To sustain a similar position, a developer without the existing reach of Facebook would have to invest hundreds of thousands to millions of dollars into paid acquisition.

Another problem this concentration poses to small developers is the very real threat of being replicated. These large companies, with massive development teams and budgets, can replicate novel features from other apps in short order, before any given app can generate enough of following to challenge the incumbents.

2. Nearly half of all time spent in mobile apps is devoted to users’ single favorite app

While time spent engaged with mobile apps has increased over the past 18 months, according to the report, that time is not distributed across a large number of apps. The report claims that the average mobile user spends 42% of all in-app time using their favorite app; from favorite to second-favorite, that percentage drops to 17% of total time, and from second-favorite to third-favorite, to 10%. 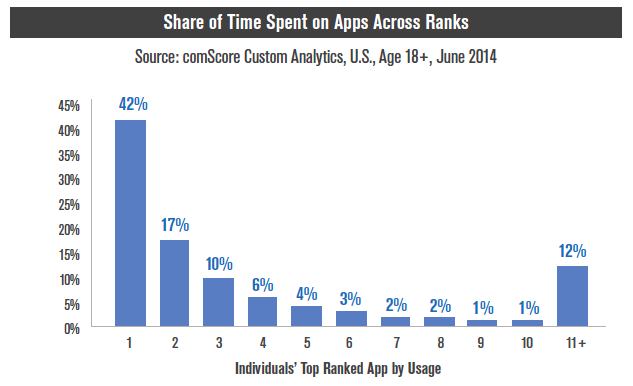 This means that growing an app’s user base may be less dependent on challenging the functionality of a competing app than challenging consumers’ entrenched behaviors. A more stratified app engagement landscape – in which users engaged with many apps for smaller proportions of total in-app time — would present opportunities for developers to simply confront the apps in their specific functionality space (eg. photo sharing, or music streaming, or puzzle gaming, etc.).

But the Comscore
report makes it clear that mobile use is dominated by just a handful of apps, which means in order to win engagement share, a developer not only has to beat the apps in one specific space but must also demonstrate enough value to convince a user to forfeit some time in their top 2-3 favorite apps. 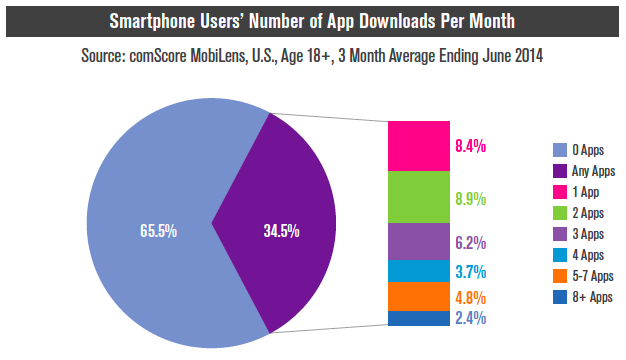 This is perhaps the most damning indictment of app store distribution, and it follows logically from the first two points: if most users don’t veer from their favorite apps, and a small number of the largest developers make users’ favorite apps and thus control the most effective means of app distribution (app install ads), then it makes perfect sense that most users don’t feel compelled to download new apps often.

App store discovery is not broken; the app economy wasn’t architected to work in favor of small developers. The Comscore report confirms this.

That’s not to say that competing with the largest incumbents is impossible: breakout successes such as Snapchat, which famously rejected a $3BN acquisition offer from Facebook, support the notion that, given a novel differentiator (in the case of Snapchat, disappearing messages), building a significant user base without spending lavishly on marketing is possible. But  this report indicates that other instances of Snapchat-like success may be increasingly rare going forward.