Thoughts on Twitter’s growth problems and suggestions for fixing them 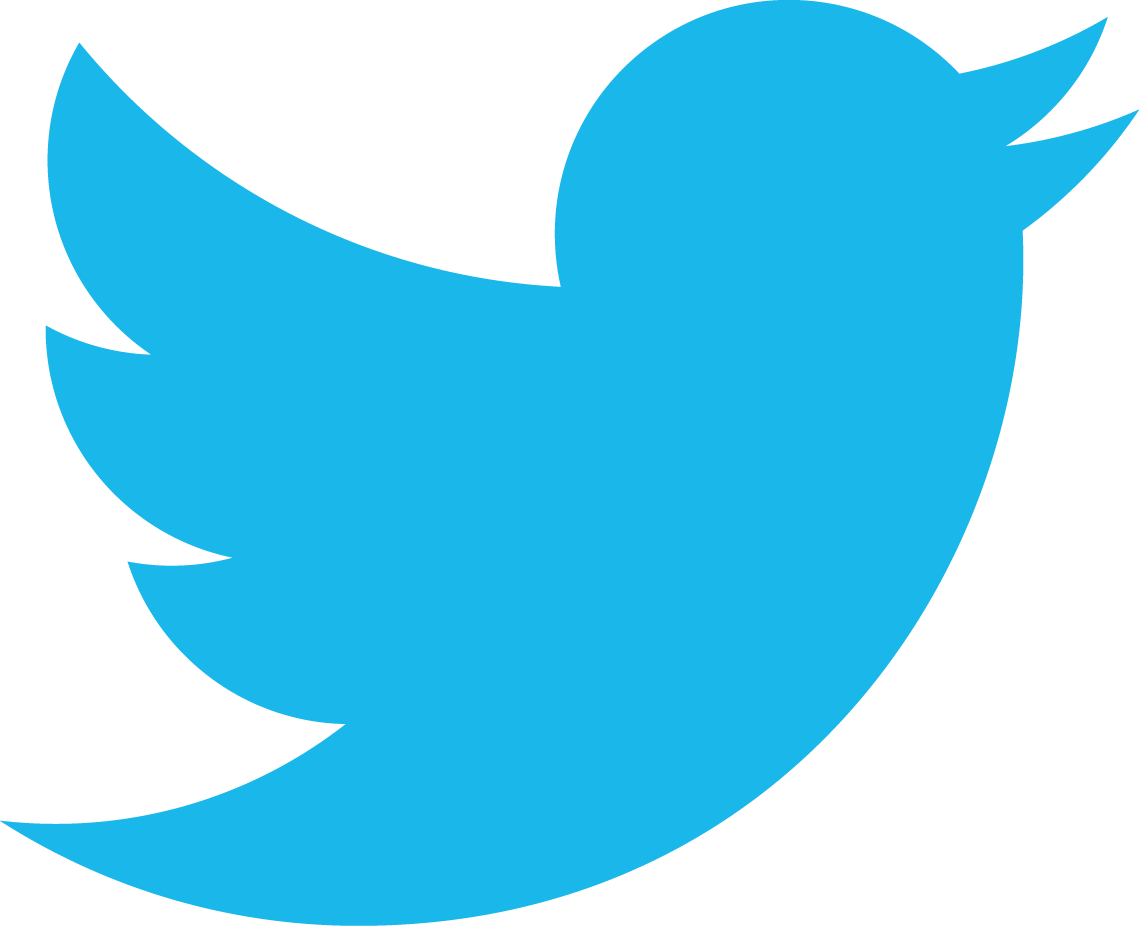 Twitter’s upcoming Q3 earnings call, which was recently rescheduled for before the market opens this Thursday, October 27th, will almost certainly be dire, the latest in a string of almost entirely unfortunate quarterly updates from the company that have previously prompted layoffs and executive reshuffles. Yet as rumors swirl about another impending round of layoffs at the company, Twitter is ironically playing, arguably, its most prominent role in popular culture yet in a noxious and bellicose US presidential race that has seen many of its most intense and bizarre dramas play out on the platform.

Twitter’s principal problem is growth: new user registrations have almost completely stalled worldwide. I last wrote about this in May 2015; the problem has not been attenuated, and in fact has probably intensified, since then.

Meanwhile, Facebook’s worldwide MAU growth for Q2 2016 — starting from a much larger footprint — was 4%: 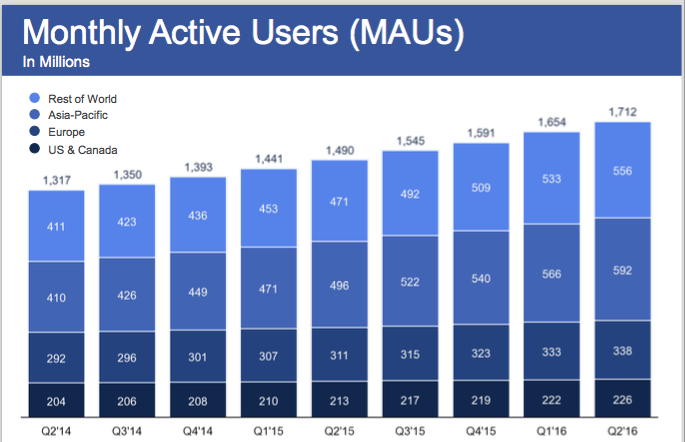 Much has been written about the ineffectiveness of Twitter’s onboarding process — the first few minutes a user spends in the service after registering, becoming acquainted with Twitter’s use case and feature set — in “selling” the purpose of Twitter to new users. I don’t believe Twitter’s first-time user experience is to blame for its feeble growth: I think Twitter’s current onboarding experience is fine for a social network and does a good job of nudging the user toward following a few other users in their first session. Facebook, famously, oriented its early growth strategy toward each users’ “magic number” (the number of friend connections that their growth team calculated as being a good indicator of long-term engagement on the platform), and that tactic, which Twitter appears to have borrowed, obviously worked out quite well for that company.

The real problem is that this onboarding experience — and the entire narrative that is spun around Twitter to new users — was crafted for a social network. But Twitter is a news service: it is at its best when it functions as a window into the most immediate of current events, allowing users to consume and engage in discourse in real time on news as it unfolds. And in fact, Twitter is probably at its worst when used as a social network, with trolling, bullying, and generally obnoxious behavior scaring many potential power users away from the product.

Twitter’s growth problem is a direct result of poor positioning: it is a news service that sells itself to non-users as a social network. I believe that Twitter could make product changes (and this article is almost exclusively concerned with its mobile presence) that would better serve its core use case and would in turn make it easier for the company to position and portray the product to new users in a way that invigorates growth. These product and positioning changes broadly fall into three main initiatives, which are:

Re-arranging the way Tweets are displayed

Twitter was designed for a broadcast format that was probably envisioned to serve in one-to-tens or one-to-hundreds configurations of people. But news broadcasts must be able to serve many more receivers than that, and trying to shoehorn that style of broadcast into the mostly linear current orientation of Twitter dialogue makes for awkward and clumsy reading. This is especially for Tweetstorms, which are powerful short-form broadcasts that are almost impossible to prevent from being interrupted by interlopers: 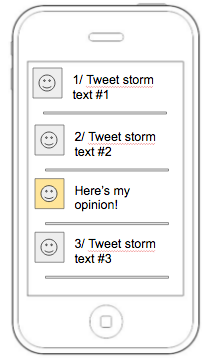 Instead of using a top-to-bottom scrolling orientation for reading, Twitter might implement a side-swiping format that follows a basic ruleset:

This solves a few problems. The first is that it makes Tweetstorms much more easily read and posted: a reader swipes left-to-right throughout a Tweet storm, always seeing the subsequent tweet in that storm as the “hero” comment on the top of their screen without any interruption in that storm’s commentary.

The second is that, by taking sub-discussions out of the viewable screen for any Tweet, it de-clutters the conversation and allows comments to be ranked by some quality standard and not chronologically (if I have to swipe on a comment to move into that new thread, I don’t care when it was posted — I have to swipe to shift my focus to that conversation, anyway. In other words, conversation streams “move” horizontally and not vertically).

This, of course, allows for the possibility of Twitter using its massive dataset of existing Tweets to automatically move toxic comments to the bottom of the screen (or hide them behind some fold, eg. “Load more comments”, as Quora does). 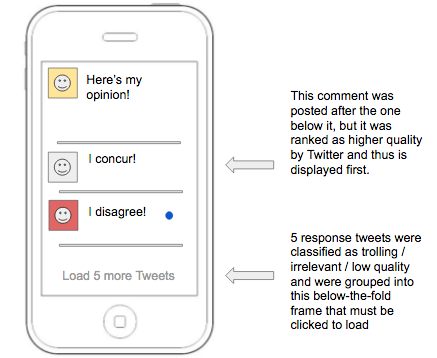 By relegating toxicity to a secondary screen, Twitter might prevent trolls from posting, but more importantly, it alleviates the anxiety that some potential users probably have in Tweeting (if they’re oblivious to trolling, they can’t be upset by it).

Encourage users to follow conversations and topics first and foremost

In embracing the magnitude of the news broadcast format, Twitter isn’t bound by the “follower” paradigm: if users can follow topics as easily as they follow other people (eg. subscribe to hashtags, parse through Tweets with better tools than mere text-based search, etc.), then the “I don’t use Twitter because I don’t have anybody to follow” issue is completely ameliorated.

Put another way: by forcing new users into the user-follow paradigm upon registration, Twitter asks users to invest time into the product before really showcasing its value to them (“Trust us, you’ll get a lot out of Twitter after you follow these people and spend some time scrolling through your feed”). If Twitter changed this onboarding process to emphasize following topics and conversations (which it could score by relevancy for unregistered users in their non-personalized feed), then the use case and value proposition is the first thing that potential users see, and the registration process is interpreted as a means of personalizing that content (once I register, I can follow the topics and conversations I’m most interested in).

This doesn’t mean that Twitter should abandon the user-follow paradigm; that’s probably infeasible and is most certainly a bad idea. It just means that Twitter should create tools for people to discover and follow conversations and topics in the same way they can follow people. Facebook does a good job of this by showcasing articles from different sources on the same topic in a carousel format underneath articles a user has clicked on. 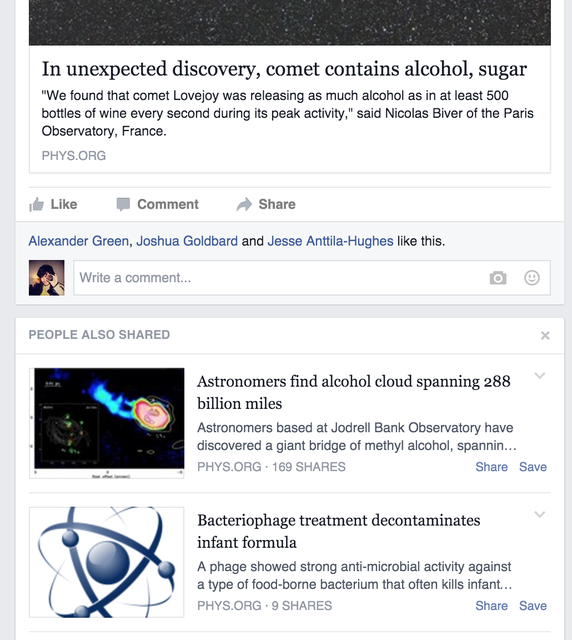 Bring this conversation orientation to the mobile web

Twitter has made some strides in making its content discoverable on the web (eg. Tweets being indexed by Google), but it could do much more by surfacing user generated content — grouped by topics, themes, and current events — to a mobile web portal that encourages users to download its app.

Twitter has a competitive advantage here because 1) its content is often timely in a way that other platforms can’t be since it is user-generated and increasingly video, and 2) hashtags and the general corpus of text that is created and attached to Tweets in large bursts of rapid-response discourse allow it to group content into themes and topics very quickly.

Twitter.com on mobile could easily become a content portal that surfaces the most important public discussions taking place on the service in real time: videos of breaking news and live events, discussions by pundits and celebrities around newsworthy topics, etc. And for the reasons stated above, Twitter has a competitive advantage here: its follow mechanic doesn’t require double-opt in (the friend request paradigm) and so users’ networks are not generally rooted in interpersonal relationships as they are on eg. Facebook. Anything on Twitter is discoverable, categorizable, and sortable in almost real time because very few fault lines exist between public and private content (except obviously for users that protect their tweets).

This content portal could be of substantial assistance to Twitter in growing its audience on mobile, even if those people don’t become users. And as mobile advertising budgets continue to shift to video, this approach is well-suited for advertisers that are eager to showcase their products in pre- or mid-roll videos (as Facebook is doing with its Facebook Live video). This could be a huge opportunity for Twitter to not only broaden the scope of its audience beyond users but also increase the number of impressions it’s able to serve in a fairly native format (pre- and mid-roll). The portal could also become the mouth of the Twitter marketing funnel, encouraging people to install the app and register in support of the use case that has already been showcased (“You can find live, short-form content without registering but need to register to personalize it”).

In summary, Twitter is an incredibly important part of modern information consumption and discovery that is struggling to grow as a result of having boxed itself into a use case that it has evolved beyond. Whatever product changes it makes, Twitter should embrace the topic broadcast format with open arms; doing so could go a long way in helping it position itself to users who may be reticent to deal with unacceptable, antisocial behavior or for whom the value of the existing use case is simply not clear.