Brand Equity is an amorphous concept that is generally dissected in the abstract. In his book, Managing Brand Equity, David Aeker, professor emeritus at the Haas School of Business and the eponymous author of the Aeker Model for valuing brand equity, defines brand equity as:

…a set of brand assets and liabilities linked to a brand, its name and symbol, that add to or subtract from the value provided by a product or service to a firm and/or to that firm’s customers.

Aeker groups the assets and liabilities that comprise brand equity into five categories:

In his book, Aeker illustrates the interplay between these categories with this diagram: 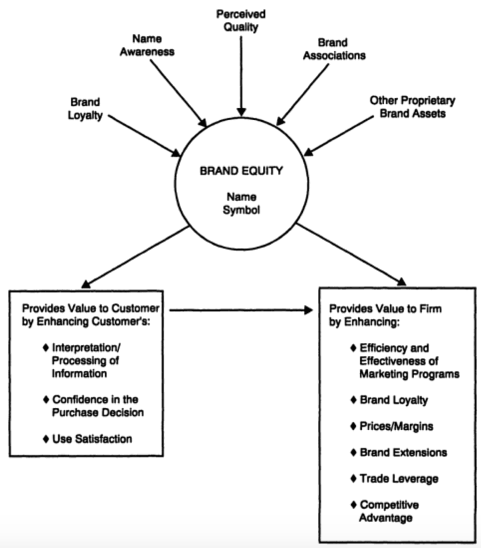 This definition and taxonomy set is far from controversial; it forms the basis for what might be considered consumer mind share and it’s reasonable to conclude that positive associations held by consumers toward a firm’s product would be of value. The issue that dogs marketers in the realm of consumer products is how that value can be quantified, and whether the necessarily long-term consequences of brand equity can be reconciled against short term incentives.

In The Measurement and Determinants of Brand Equity: A Financial Approach, in which Carol Simon and Mary Sullivan propose a framework for quantifying the value of a firm’s brand equity based on the firm’s enterprise value, two benefits of brand equity that contribute to a quantitative understanding of its value are identified:

Kevin Keller, in Conceptualizing, Measuring, and Managing Customer-Based Brand Equity, studies these two benefits from the perspective of the consumer in a concept that he calls customer-based brand equity, which he defines as:

Customer-based brand equity is defined as the differential effect of brand knowledge on consumer response to the marketing of the brand… a brand is said to have positive (negative) customer-based brand equity if consumers react more (less) favorably to the product, price, promotion, or distribution of the brand than they do to the same marketing mix element when it is attributed to a fictitiously named or unnamed version of the product or service.

Consumer reaction to a brand, and the difference that reaction has on sales, may be the most salient form in which to consider brand equity, since isolating the value of a price premium is really only relevant for certain types of products. Simon and Sullivan point out in their paper that the price premia dimension to brand equity is less germane for products that have been commoditized; for instance, they point out that:

Marlboro cigarettes do not command a price premium over most other brands (except generics), but it would be difficult to argue that Marlboro, with a 25% market share worldwide, does not have considerable brand equity.

It is on this point that the application of brand equity to mobile apps seems most appropriate, and it’s also where the concept of brand equity within the realm of mobile breaks down, due to fundamental differences between the mobile app ecosystem and traditional retail shopping outlets:

These two points contribute to the idea that brand equity holds no relevance on mobile. In his paper, Keller illustrates the dimensions of a consumer’s brand knowledge with this diagram: 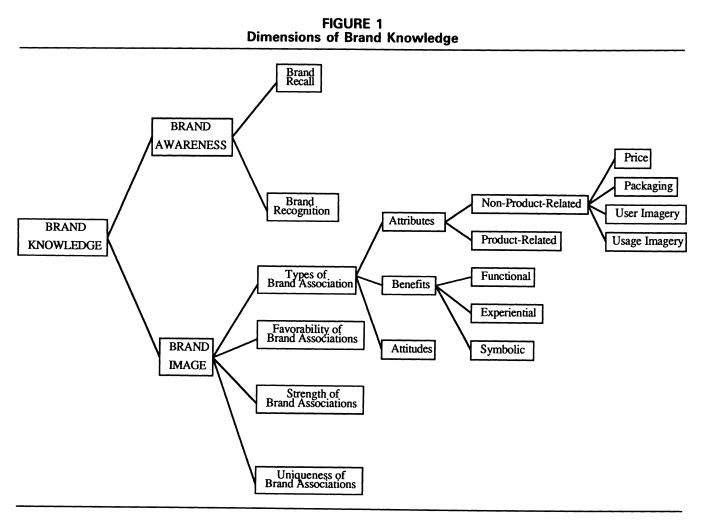 The lower portion of the diagram, stemming from the “BRAND IMAGE” node, pertains to the knowledge gaps around characteristics of a product that a brand fills ex ante consumer use and which alleviate, in the consumer’s mind, the risk of spending money on that product without having first-hand knowledge of its quality. But these knowledge gaps don’t exist in an ecosystem where (almost) all products are free, because a user takes no risk in adopting and evaluating a product.

Rather, because of the importance of direct-response advertising on mobile, network effects take the place of brand equity: the ability of an app developer to establish a large user base (through both marketing campaigns and the three Cs: communication, competition, and collaboration) and to retain those users through portfolio cross-promotion is a more actionable and effective strategy than attempting to build a brand. Empirically, this can be seen in the case of Facebook Messenger. 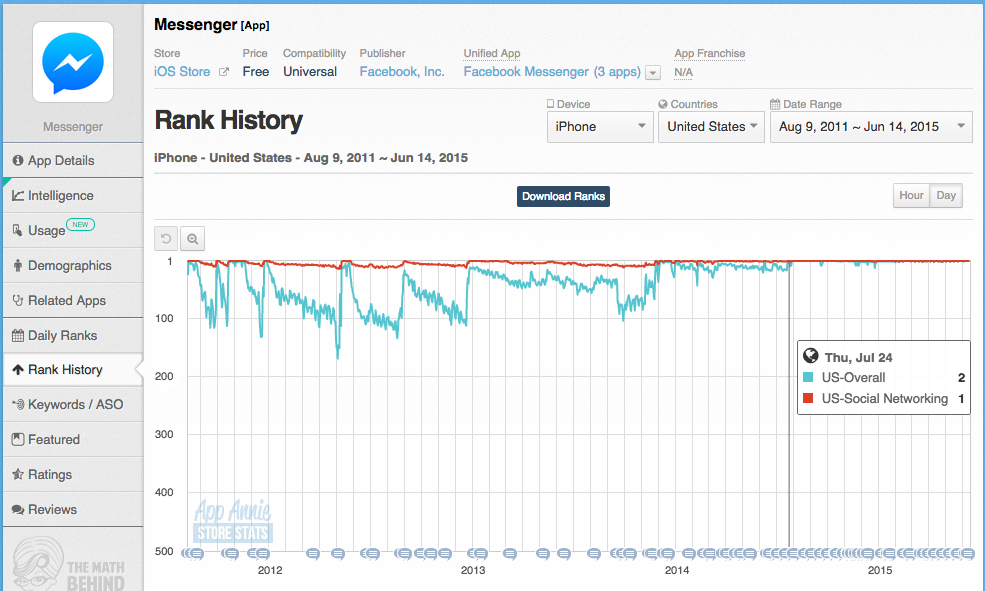 Facebook Messenger was first released to the App Store in August 2011. The app generated appreciable traction in the first few years after release, riding a fairly consistent ebb and flow of new installs across the Top 100 downloaded ranks. But in July 2014, Facebook infamously forced the download of the Messenger app from within the Facebook app, which rocketed it into a Top 10 Downloaded position from which it has rarely since fallen. 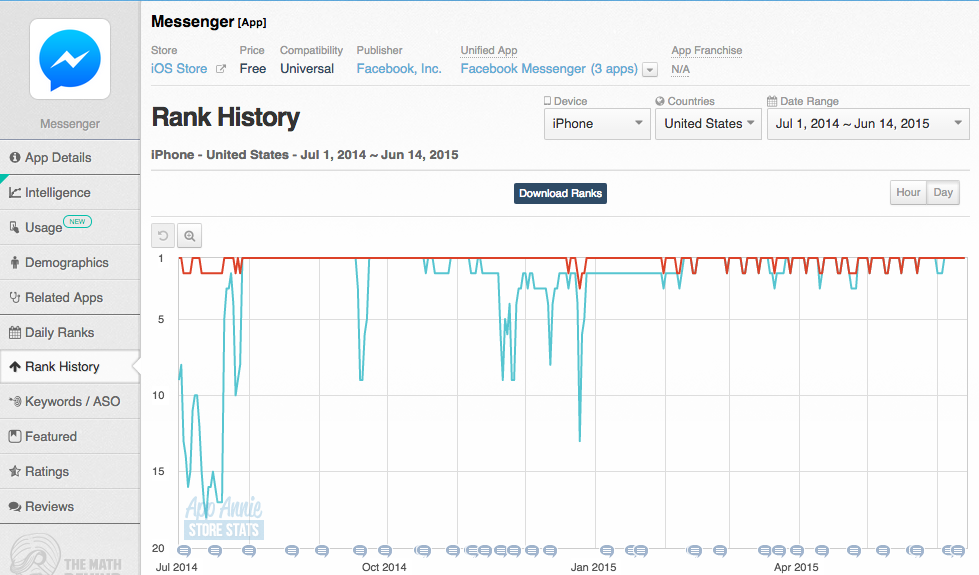 Facebook indisputably commands a highly recognizable brand, especially for smartphone users. Yet Facebook Messenger didn’t become a smartphone staple until Facebook channeled its massive user base into it through what was essentially a direct-response marketing campaign. It was brute force cross promotion, not the Facebook brand, that propelled Facebook Messenger to prominence.

Brand recognition is irrefutably a phenomenon on mobile, being the driving force behind the recent trend toward branded mobile games. But these releases have almost universally co-opted existing, non-mobile brands from reality television (eg. Kim Kardashian: Hollywood), sports (eg. Madden NFL Football), comic books (eg. MARVEL Contest of Champions) and classic video games (eg. Mortal Kombat X), among others. Furthermore, these branded games are being released by large studios with massive budgets for marketing, existing networks to tap for cross promotion, and deep expertise around free-to-play economy design. In a sense, it is the size of the existing networks of the developers being awarded these IP deals that allows them to win the deals in the first place.

Brand recognition isn’t the same as brand equity; brand recognition can decrease a firm’s marketing costs, but it can’t eliminate them completely on mobile, and it also doesn’t directly influence revenues (as a result of consumer response) as it does with retail goods. Because of the nonexistent switching costs described earlier, the lack of information gaps (users can immediately understand the quality of an app for free) and the resultant lack of brand loyalty, and the opacity of mobile as an ecosystem, brand recognition may award a developer a marketing advantage but it doesn’t necessarily produce brand equity.

Brand recognition has the ability to amplify the effect of marketing campaigns, but absent those campaigns, even branded apps are likely doomed to obscurity. If network effects take the place of brand equity on mobile, it means the friction between short-term incentives and long-term customer retention strategy are less severe in that ecosystem, because scale and retention are eminently measurable.