What does traction look like on mobile? Meerkat vs. Trivia Crack

Meerkat, the live-streaming video app that captivated the technology press during SXSW this year, confirmed last week that it has raised a round of Series B financing — reportedly around $12MM on a $40MM valuation — from a consortium of investors led by Greylock Capital and participated in by noteworthy names from the entertainment industry such as Jared Leto, the venture capital arm of the Creative Artists’ Agency, and Lorne Michaels’ venture vehicle.

By all accounts, Meerkat is an exceptionally well-designed app, and video livestreaming on mobile is doubtless a lucrative commercial opportunity, as it complements the growth of real-time, one-to-many broadcasting and facilitates a new dimension of interactivity between broadcaster and audience member. This is most likely why Meerkat chose to integrate its app registration process with Twitter’s authentication scheme; the real time nature of Twitter rendered it the most natural fit for Meerkat’s one-off broadcasts.

The integration of Twitter’s authentication system within Meerkat, as well as the notification tweets that Meerkat automatically posts on a broadcaster’s Twitter feed to signal the beginning of a stream, precipitated an incredibly powerful positive feedback loop within the community of early adopters that began producing and consuming Meerkat streams. This feedback loop created within that community an impression of massive, widespread adoption: a torrent of opinion pieces from technology journalists and enthusiasts hailed Meerkat’s user base growth as explosive and unprecedented.

While it’s true that Meerkat did achieve commendable early-stage growth with 50,000 installs in its first 30 days live (or around 1,700 installs per day), these numbers, on mobile, are in no way exceptional. Meerkat peaked at position #140 on the Top Downloaded chart on iOS (US / iPhone) on March 20th, six days before its funding round was confirmed and one day after rumors of its impending round began circulating. As of this writing, the app sits at position #397 on the same chart. Again, this isn’t trivial growth, but its scale calls into question whether the amount of press coverage the app’s adoption garnered — and the frenzy around Meerkat was almost entirely centered around its supposed viral phenomenon status, not its functionality — was rational. 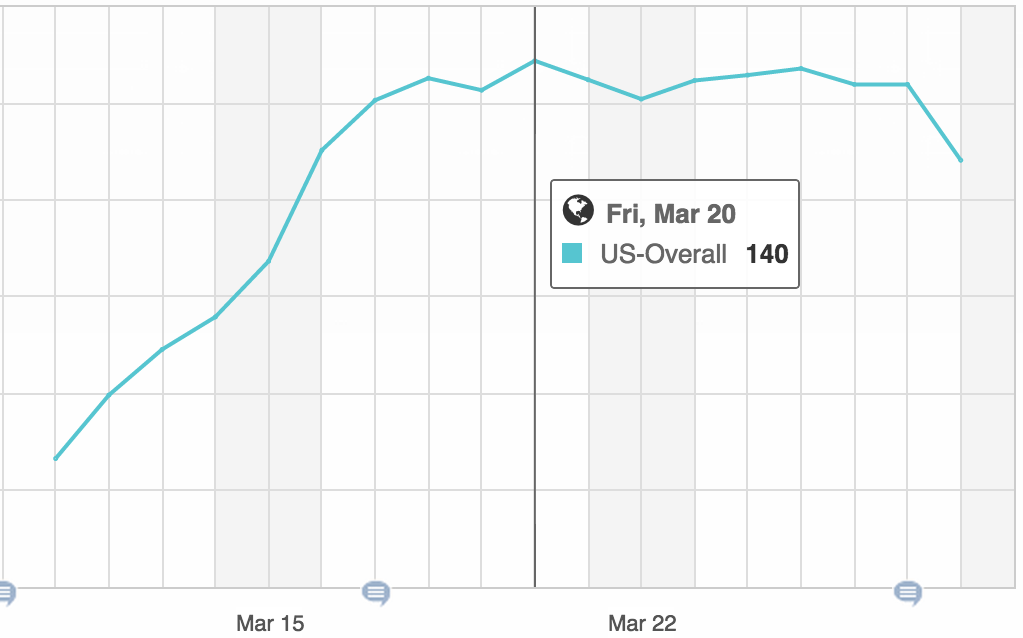 Compare Meerkat’s launch to the case of Trivia Crack, a mobile quiz game released by Argentinian developer Etermax: despite receiving almost no press coverage when it was published in late 2013, the game ascended the Top Downloaded charts across South America quickly through purely viral adoption and ultimately penetrated the United States late last year, where it now occupies positions #14 and #6 on the Top Downloaded charts for Free and Paid apps, respectively (US / iPhone; the game has both a paid and free version). Etermax has ostensibly raised no external funding (or, at least, has not reported news of any funding).

Trivia Crack chart positioning in the US (red line) and Argentina (blue line), from October 2013 through now

The difference in adoption profiles of these two apps — with one rocketing to a top 50 chart position in its home country within a number of days and replicating that growth across South America and ultimately in the United States, and the other seemingly peaking at fairly modest chart positions worldwide after platform featuring and substantial press coverage have ended — begs an interesting question: what does genuine traction look like on mobile? In one of the most ferociously competitive commercial marketplaces on the planet, in which prohibitively high marketing costs brought about by platform idiosyncracies create massive unit profitability scaling hurdles, what growth trajectory — either paid or through viral adoption — must an app achieve in order to secure long term sustainability and, ultimately, commercial success?

The broader issue in the discourse around Meerkat seems to be a lack of understanding of scale on mobile. For desktop and web-based applications, a high density of product references from early adopters on Twitter could comprise a legitimate signal of massive, wide-spread adoption. On mobile, a winner-takes-all medium, this is less the case. But luckily, traction on mobile is even easier to verify than on the web, because a leaderboard exists that can quickly corroborate whether an app has been adopted by wide swaths of the smartphone-owning population: the Top Downloaded platform charts.