Apps aren’t dying, but not everyone knows how to make money on mobile 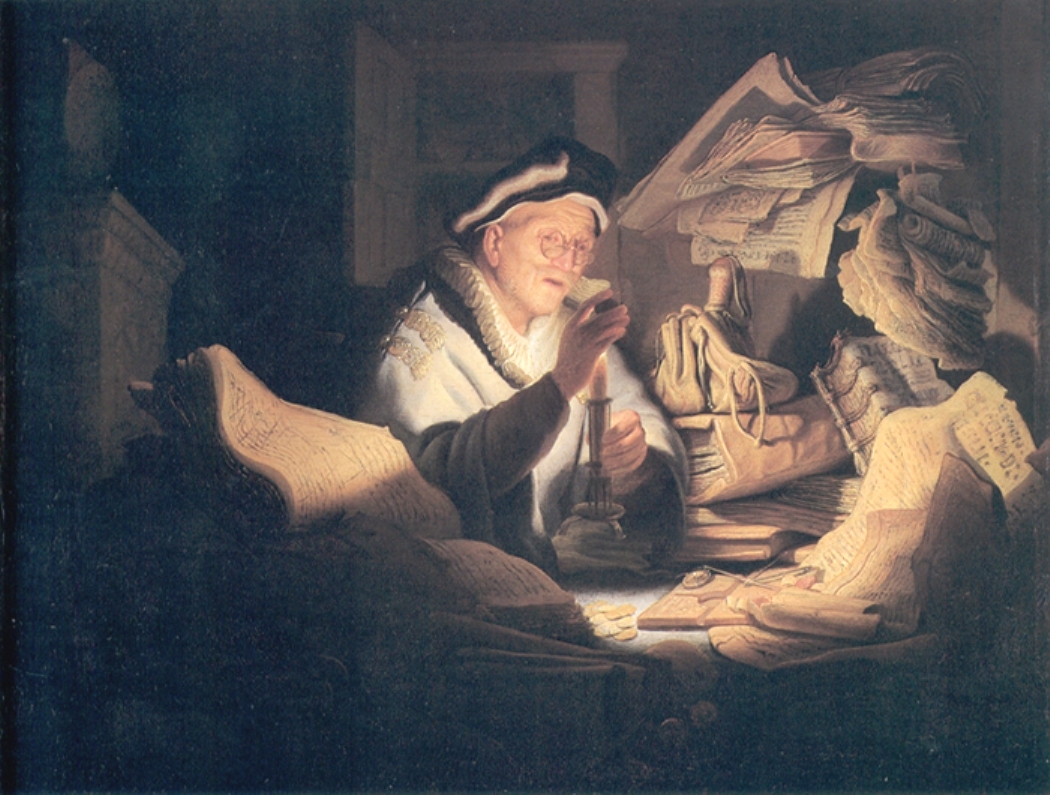 In June, a research report by Nomura (relying on data from SensorTower, a marketing intelligence service) catalyzed a wave of hysteria around the impending death of the app. This report, which found that downloads in the US declined by 20% year-over-year from May ’15 to May ’16 and that very few large app developers grew their monthly installs in that period, hinted that a slowdown in monthly installs for the largest (and oldest) mobile app developers spells a certain and imminent “end” to the boom in the mobile app economy. Many of the articles that reported on the Nomura findings also cited a nearly two-year-old article (August 2014) from Quartz that highlighted a headline from a comScore report: most smartphone users download 0 new apps per month.

But these conclusions, drawn from install counts for the largest and most established publishers, are facile. Last month, Supercell, the five-year-old mobile gaming company, was valued in a transaction at more than $10BN, more than three times what it was valued at in 2013. Also last month, Snapchat, a four-year-old mobile video messaging service, revealed its new advertising API and announced a goal of $1BN in revenues by 2017 (up from an expected $250 – $500MM this year). App installs may be falling for established developers with large, defensible user bases, but this is more a function of declining growth in smartphone sales in the developed world than a macro slowdown in the app economy. The fact is, the app economy has always looked as it does now: in 2014, by my estimates, two developers (King Digital and Supercell) generated 14% of total IAP revenues across both the App Store and Google Play.

Last week, mobile attribution and analytics provider Appsflyer released a report entitled The State of In-App Spending in which it broke spending down across various app verticals and geographies. What the report found is a vast gap in average monetization when paying users are considered in isolation versus when the entire user base is considered:

For developers operating in the mobile app economy, this dynamic is well understood and always has been, but the sheer scale of the difference (20x!) underscores an important point: the developers that can capably monetize their users stand to make much more money than those that can’t.

And while some developers benefit more than others from this reality (as a result of levels of funding, access to experienced product talent, existing revenue base, etc.), the fact is that the overall app economy is growing (significantly). According to App Annie, global mobile gross revenues are set to grow by 24% year-over-year to $50.9BN in 2016, essentially doubling to $100BN in 2020: 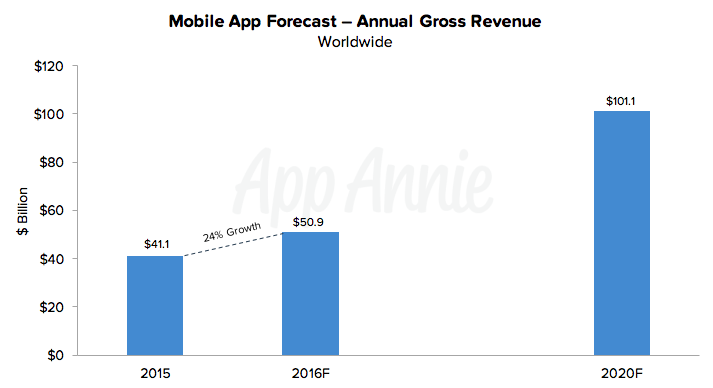 The Appsflyer report also showcased two other important trends in mobile. The first is that shopping apps are monetizing users even better than are gaming apps: 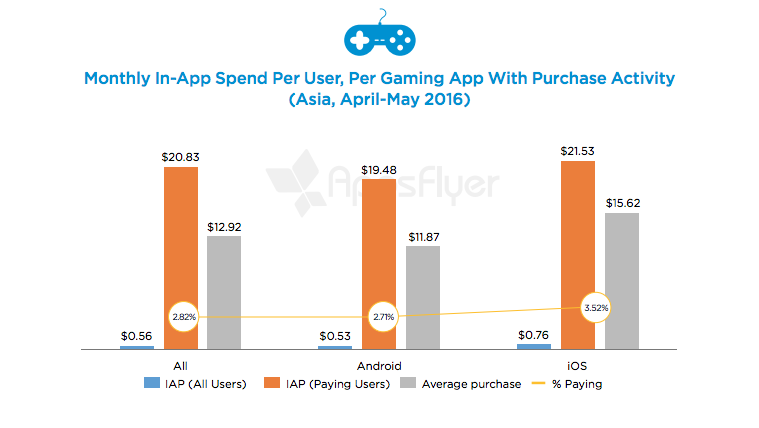 Mobile commerce is big business: in the shopping frenzy between Black Friday and Cyber Monday in 2015, 37% of all online purchases were made on mobile devices (spiking at 41% on Black Friday). This compares to 30% in 2014.

And the second big trend is that advertising income is growing as an overall percentage of mobile revenue: 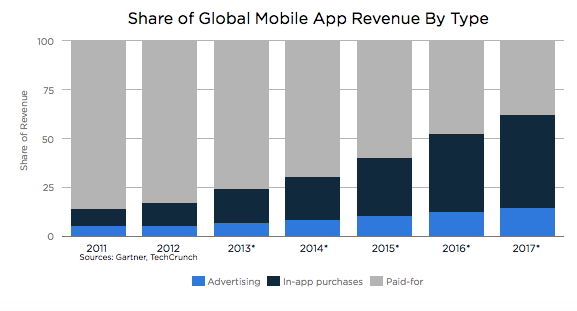 This is important. Firstly, advertising revenues aren’t indexed in Top Grossing charts, so simply noting the stasis there doesn’t give a complete picture of the app economy. And secondly, according to eMarketer, global mobile advertising spending is set to almost double between 2016 and 2019, to $200BN:

The app economy is still growing when the metrics that matter most — revenues — are considered. Install counts are vanity metrics, and in any case, for some companies install count growth is irrelevant given their existing footprints.

For example, Facebook has more than 1.5BN mobile users; it is such a global phenomenon that it has to build internet infrastructure to reach new users. And anyway, Facebook’s expansion strategy for the past few years hasn’t been to necessarily reach new users but to engage its users across more than one app. So while Facebook’s flagship app might not be experiencing install growth, its overall portfolio of apps is (see Facebook’s new Boomerang and Layout apps for Instagram as an example of this strategy in action).

The über point from all of this is that, if the app boom is over, no one told consumers or advertisers. Yes, it is becoming harder to make money in the app economy because the stakes are higher now than they were in 2012. But the developers with the monetization and ad placement expertise are making lots of money, and that shows no sign of slowing.