The advertising dilemma for mobile games In-game advertising revenue can be a double-edged sword.

App Annie recently released a report on mobile advertising and monetization that revealed some interesting trends:

Meanwhile, gaming-focused investment bank Digi Capital recently released its games investment review, which revealed that investment into games (across the board, not just restricted to mobile) fell by 7% in the first quarter of the year. 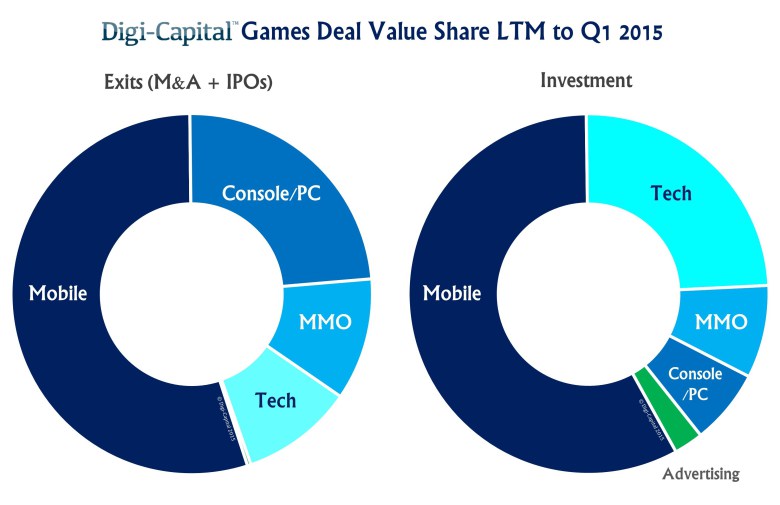 These data points paint an interesting picture of a bifurcating mobile games economy, with some developers constructing gameplay around strong free-to-play economies and others focusing on advertising-driven monetization (for example, Crossy Road).

At first blush, an explosion in advertising revenue on mobile seems wholly beneficial to the ecosystem at large. The frozen Top Grossing chart for 2014 is a perfect example of the winner-takes-all nature of the app economy presenting a massive barrier to new entrants: the networks established by megahit games have become such significant competitive advantages for mobile gaming’s tier-1 and tier-2 incumbents that competing on the basis of marketing is now impossible for newcomers.

This explains a decrease in VC funding for mobile gaming. For games that compete on the basis of unit economics and marketing-led growth, no amount of funding would be enough to compete with the entrenched leaders, and games that rely on gimmicks or highly-viral but superficial gameplay for distribution are unfundable (at least ex ante explosive growth).

But while the increase in the scope of mobile advertising revenues has provided many developers with a path to commercial viability where perhaps deeper free-to-play economies would have failed, it also raises an interesting question: which companies benefit most from that increase? If VC money isn’t flooding into mobile gaming but rather is receding from the sector, then the theory that the mobile advertising industry is being fueled by profligate spending from VC-funded gaming start-ups can be put to rest.

And if this is the case, then it suggests that the major sources of ad spending in mobile games are the largest mobile game developers. This is verifiable: in 2014, Supercell spent €400MM on marketing and King spent $455MM on marketing (page F-3) (note that these figures including marketing across all channels, not just mobile advertising).

This creates an interesting dynamic. The gaming studios that rely heavily or exclusively on mobile advertising revenues are essentially driving players into the games operated by the biggest developers, acting as conduits into the titles that are able to monetize users with robust free-to-play economies. Most of these large developers (with King being a notable exception) monetize via advertising, too.

The highly viral yet one-dimensional games that can achieve growth without relying on marketing are ultimately subsidizing the marketing costs of the largest developers. This is the advertising dilemma for mobile games: for small developers without marketing budgets and without recourse to VC funding, creating simple experiences that are more prone to word-of-mouth growth may be the only viable commercial strategy, leaving advertising as the best possible option for generating revenues. But in selling ads for other games, these developers eject users from their own spheres of influence, mostly into the portfolios of large developers that have invested heavily in analytics and can employ some level of intelligence in shuffling users into the games they’ll most enjoy.

Of course, not every user that clicks on an ad or even ultimately downloads an advertised game churns out of the source app, but that’s a secondary point. Monetizing with advertising presents an impossible choice for small developers: fuel the growth of one’s competitors or compete on the basis of balance sheet strength.