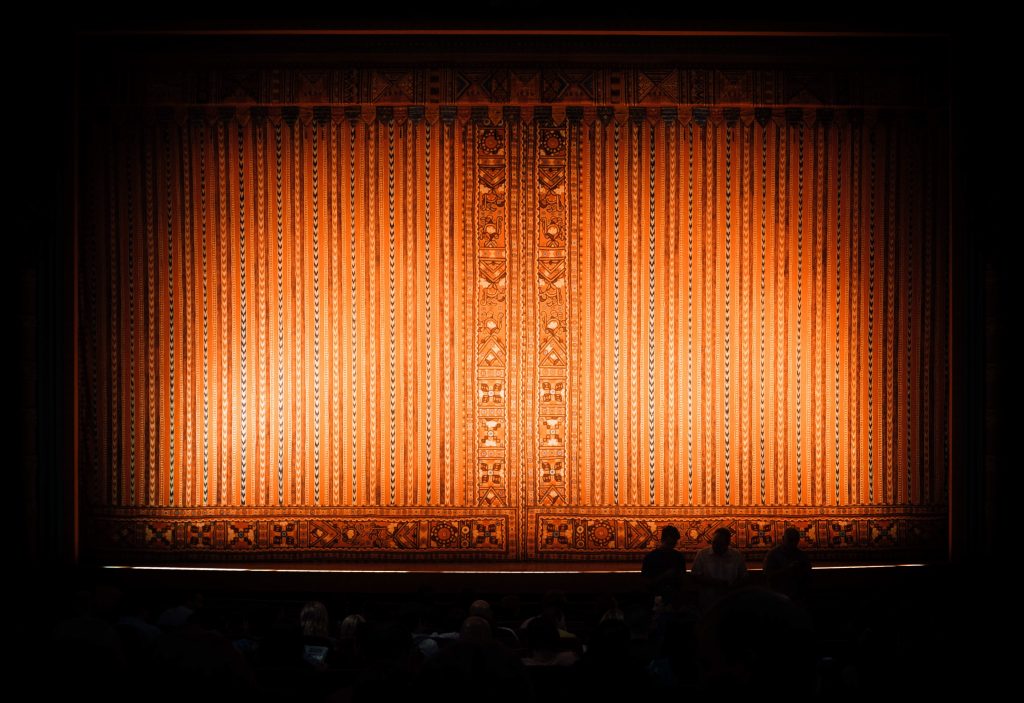 An altogether predictable fate has seized the mobile app economy and, more broadly, mobile: it has become boring. Or, at least, it has grown old, and the largess of its bounty seems less charitable to the companies now pursuing its principle resource: its position in the pocket of a massive proportion of the world’s adult population. But the boring mobile app economy has undergone a fundamental structural and constitutional evolution in the past two years; like all instances of evolution, the changes that this one produced were imperceptible in real time but are glaring in retrospect.

There are now four primary business models driving success for companies on mobile:

The emergence of new business models has upended the supremacy of gaming on mobile; the set of games that I have dubbed the “2012 vintage” — Clash of Clans, Candy Crush Saga, and Game of War — are still relevant and continue to earn lots of money, but they no longer stubbornly adorn the very top of the Top Grossing chart and, perhaps more importantly, their successors have not supplanted their positions. In fact, gaming’s share of the Top Grossing position has shrunk year-over-year since 2014*: 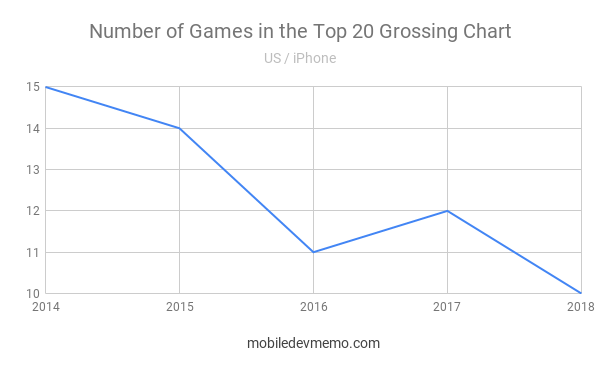 Meanwhile, the number of music and video streaming apps in the Top 20 Grossing chart has ballooned: 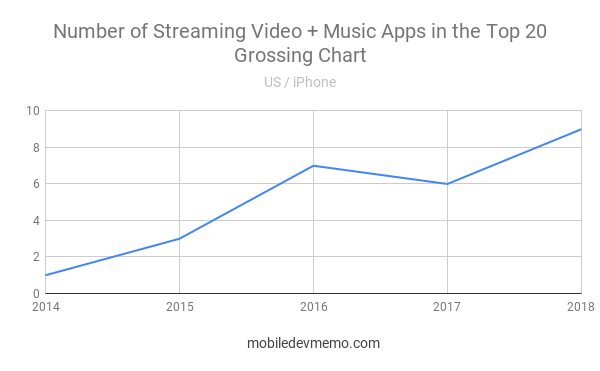 On any given day, it is not uncommon for only one or two games to sit in Top 10 Grossing positions, which would have been unthinkable just a few years ago. At first blush, this thawing of the Top Grossing chart might cause one to deduce that the popularity of gaming on mobile is diminishing and was perhaps simply a fad in the first place, but this glib conclusion is inconsistent with the realities of the market: mobile gaming revenues and user numbers continue to grow at an impressive clip, producing half of the entire games industry’s revenue at a forecasted $70BN in 2018, according to Newzoo.

The trend noted above reveals the growth of mobile across the board: games paved a path to mass consumer adoption of mobile which other forms of content are now following to massive audiences and revenues. The entire mobile app economy is growing; that gaming doesn’t own the vast majority of it anymore is not bad news for gaming but rather good news for everyone participating in the ecosystem.

What caused the shift?

The growth in the new business models on mobile that facilitated the shift in consumer attention into non-gaming forms of content is important to try to understand causally. It seems likely that four social and structural changes took place over the past few years to give the business models cited above the space to develop:

Of course, understanding the growth of these business models in an analysis of the Top 20 Grossing Chart raises another question: do all developers benefit equally from them? Of the current* Top 20 Grossing position holders, very few are new to mobile and in fact some are many-years-old services that first rose to prominence on desktop: 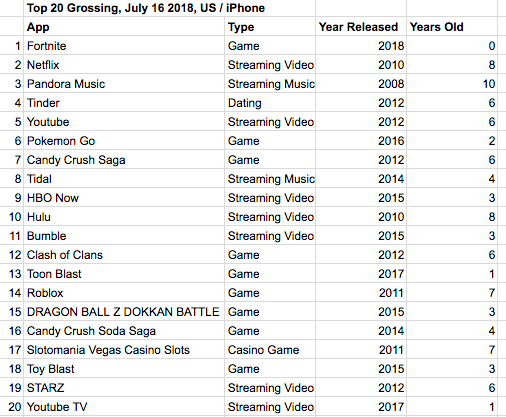 Who is benefiting from the shift?

In looking at the Top 20 Grossing data across years, it’s striking to note how the number of apps that were released same-year** falls over time: 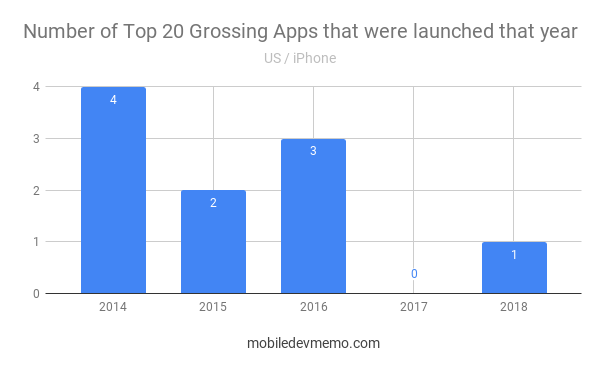 This development can also be seen in the rising average age of apps in the Top 20 Grossing Chart over time: 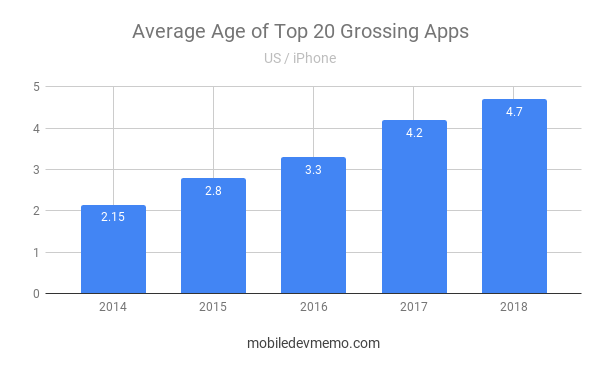 A cynical interpretation of the charts above could again lend itself to a gloomy conclusion about the mobile app economy: the riches are being wholly concentrated at the top of the charts by large, established companies that have captured disproportionate market share.

But this would ignore the broader implications of this shift: the pie is growing, and these new business models on mobile have unlocked opportunities for even smaller developers to build lucrative businesses on mobile in more diverse ways than merely through selling in-app purchases.

The growth of new business models is the story in these numbers, and it benefits everyone. A Top 200 Grossing developer today makes much more money than a Top 200 Grossing developer did in 2014; additionally and advantageously, developers now have more ways to make that money, and they have a more decisive playbook from which to draw operating guidance on growing their audiences. The emergence and growth of these new business models on mobile is a massive boon for the ecosystem; this second act of mobile promises to create many more — both in number and variety — fruitful and sustainable business than the first act did.

There are flaws in drawing macro conclusions about the app economy from Top Grossing Chart rankings. The most obvious of these, especially in the context of this post, is that revenue from advertising is not captured by Top Grossing rankings, and therefore the hypercasual genre isn’t represented in the underlying data used here. But a quick Google search can settle any doubts that hypercasual is growing explosively on mobile.

The second flaw in analyzing the Top Grossing Chart to draw broad hypotheses about the mobile app economy is that snapshots can be misleading due to the volatility of the ranks of subscription-based apps; when these apps charge their monthly fee, their rankings jump precipitously. Still, over the time period analyzed here, the trends are clear, so I felt comfortable using these snapshots to build an analysis.

The third flaw in relying on the Top Grossing Chart to construct an understanding of the state of the app economy is that it is totally devoid of numerical context outside of rank. The scale of the revenue numbers at the top of the Top Grossing chart is simply astounding; without that qualification of just how much money these apps are generating, and also of the slope of the degradation of the revenue curve down the Top Grossing ranks (which is severe), the magnitude of these changes over time is difficult to articulate.

**in measuring the age of apps, for the sake of simplicity, I just subtracted the year of an app’s release from the year being considered eg. in considering the year 2016, if an app was released in 2014, it’d be represented as 2 years old, no matter when it 2014 it was released.

Photo by Jad Limcaco on Unsplash