With respect to mobile gaming, 2014 might be described as a year in which the rich got richer: perennial Top Grossing stalwarts King and Supercell both released new titles that have consistently ranked amongst the top 20 revenue generators on the App Store, while Machine Zone, Big Fish, and GungHo managed to retain their Top 20 statures with games that were released in either 2012 or 2013. 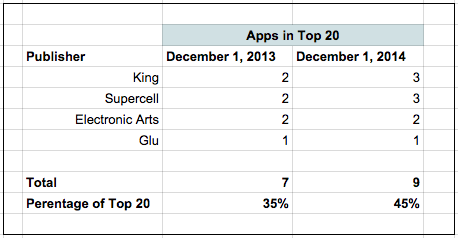 This consolidation was, at least in part, the result of a few high-level trends that favored larger developers with massive balance sheets over the course of 2014: specifically, increased mobile marketing costs driven primarily by heightened competition for mobile ad impressions and the great unbundling.

While these trends don’t look to abate in 2015 and further consolidation at the top of the grossing charts is likely, the mobile user acquisition landscape does seem to be diversifying, and geographical factors may create opportunities for smaller developers to avoid the marketing arms race. Below are four predictions about how the state of mobile gaming may change over the course of 2015.

The mobile advertising marketplace has become untenably competitive for small developers without the financial wherewithal to spend millions of dollars on launch campaigns. The emergence of the gimmick app economy proved that novel, simple apps can rocket to popularity through massive word-of-mouth virality and press attention.

Some game developers have attempted to capture this phenomenon to sidestep the need for traditional, direct-response user acquisition campaigns; Fun Run 2, for instance, recently reached the top of the App Store’s Top Downloaded chart (US / iPhone) without the benefit of a paid launch marketing campaign.

Developers will begin thinking strategically about these types of growth opportunities earlier, perhaps before beginning development, given the exorbitant cost of competing for media on traditional channels. Additionally, as new channels emerge, familiarity with them will become a competitive advantage. Product Hunt, for instance — on which only approved members can post new product listings – has become an important user acquisition channel, but it isn’t accessible to the general public.

Continued consolidation in ad tech as platform operators give more data away for free.

Attempting to compete for exclusivity, the largest platform operators have begun expanding their tool sets to provide end-to-end functionality to developers and establish platform “lock in”. Apple, for instance, announced at WWDC that it would be introducing analytics and attribution into iTunes Connect at some point in the future, alleviating the need for developers to outsource those functions to third party services. And both Amazon and Google offer their mobile analytics suites for free.

Facebook specifically would benefit from providing increased transparency into its advertising offering – and potentially even introducing an attribution service of its own – as a means of building a moat around its advertising infrastructure, which has quickly and relatively quietly become one of the largest and most important mobile marketing platforms.

Once the largest platform operators begin commoditizing erstwhile paid products, the pace of consolidation in the mobile ad tech market may quicken; large enterprise SaaS companies with diverse product offerings could see M&A activity for the purposes of upselling and cross-promotion into their own product catalogues as being cheaper than direct user acquisition. Additionally, large consumer tech conglomerates that are behind on mobile (eg. Yahoo!) may acquire mobile ad tech companies in attempts to compete with established platforms in terms of vertical integration.

Tencent’s participation in the recent $10MM funding round for Dots and Alibaba’s $120MM investment into Kabam in late July prove that the largest Chinese internet conglomerates, hungry for new content for their domestic platforms as well as strategic influence in the West, may be seen as ideal partners for Western game developers looking to tap into the massive and growing Chinese gaming markets.

According to Digi Capital’s Q3 2014 Global Games Investment Review, the Asia Pacific region could represent almost 40% of global mobile and online gaming revenue by 2017, and 5 of the 10 largest gaming acquisitions in Q3 2014 were made by Chinese firms.

These strategic investments by Chinese firms may establish new distribution norms, with large Chinese conglomerate investors taking the role of publisher and alleviating the need for Western firms to work on a revenue share basis with domestic partners to get their games into the hundreds of Chinese app stores. Such strategic investments – which offer for target companies both growth capital and access to the massive Chinese market, which grew by 93% to nearly $3BN in 2014 – may become more commonplace, inspiring increased interest in the Chinese market if target Western companies are able to generate significant revenues in China.

The end of “tablet-only” games and a shift in focus to phablets.

Tablet sales growth has slowed, down to just 7.2% in 2014 vs. 52.5% in 2012. This slowdown has been attributed primarily to two things: much shorter replacement cycles for tablets than were previously estimated and the rise of phablet.

This shift will likely influence the form factor calculus of mobile game developers, who would reasonably favor the phablet over tablet given 1) better hardware specifications and thus performance (as tablets age longer before being replaced) and 2) the provision of dual use case gameplay sessions (both the “on the bus” short session and “on the couch” longer session).

A shift in preference to the phablet form factor away from the tablet-only strategy could impact not only the types of games that developers choose to make (games requiring very large screens may be jettisoned from development roadmaps) but also the length of game development cycles, as separate, optimized apps must be created for each form factor (tablet vs. phablet / phone) for games that otherwise would have been tablet only (as Super Evil Megacorp did with Vainglory).