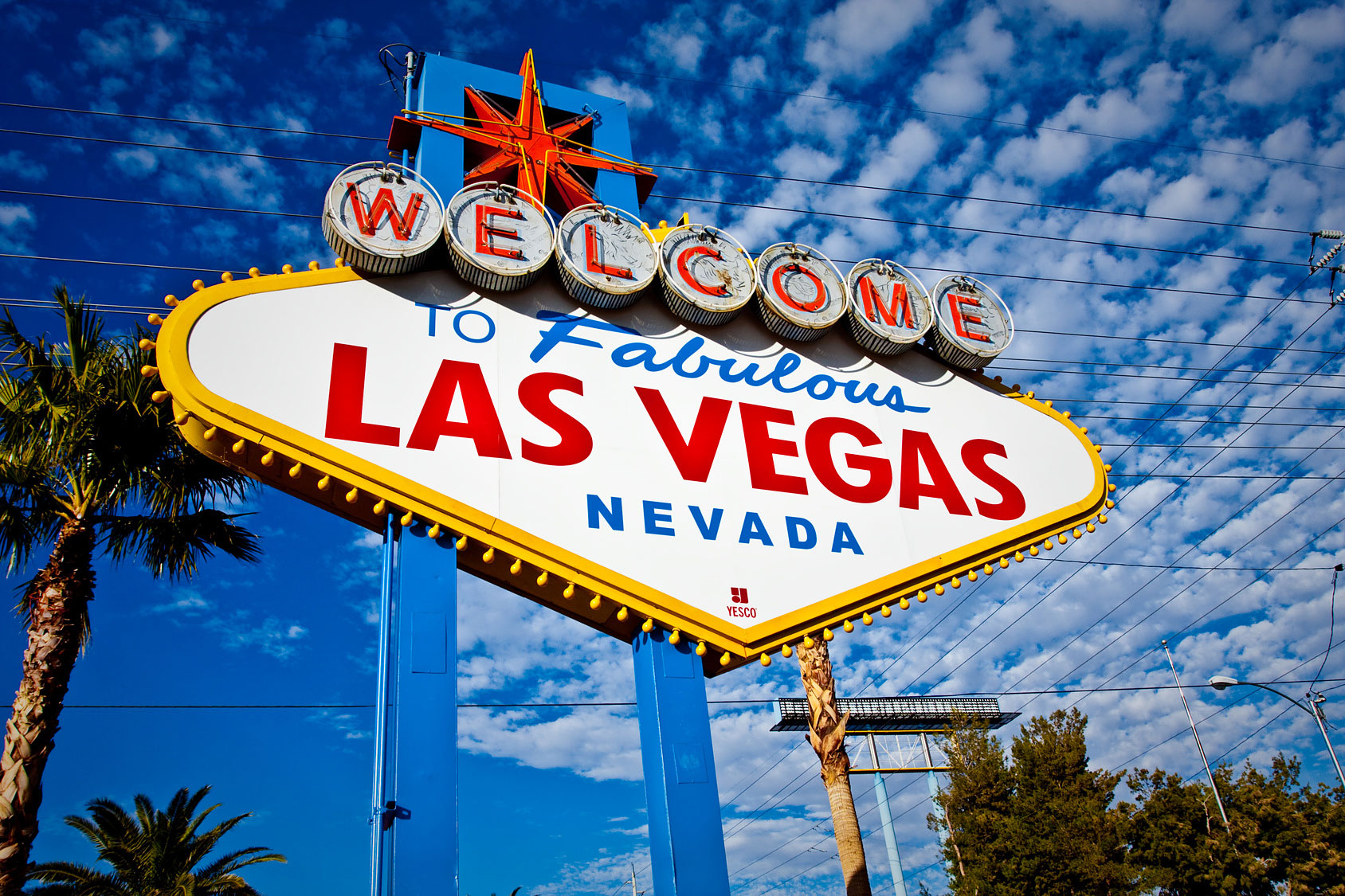 Given the vast number of participants in the app economy — Apple revealed at WWDC that more than 2 million apps are available for download in the App Store, with that number likely being higher for Google Play — it might be tempting for smaller developers to liken launching an app into the massive mobile void to simply taking a blind risk: flipping a coin, the rolling of dice, etc. The implication of such a choice of phrase being that success for a mobile app is largely determined by circumstances outside of a developer’s control, such as breakout virality. After all, the largest developers command substantial portions of the overall app economy.

And yet this notion — which could either be very comforting or very, very scary (a 50% chance of failure irrespective of strategy, preparation, product quality, etc. is intimidating), depending on the interpreter’s mood — is easily refuted. While it’s true that the app economy is a winner-takes-all marketplace generally, it’s difficult to support the idea that success on mobile is random and isn’t the result of well-placed and well-resourced efforts when looking at the Top Grossing charts (US / iPhone):

For which of these apps was success not the result of either a pre-existing user base, a superior product, and / or impeccable execution? Inherent virality is a product strategy; deeply optimized monetization is the result of rigorous experimentation; IP licensing is a marketing strategy (and requires very thoughtful market analysis to get right); etc. How much of a role did blind luck play in the success of any of the above apps? Coming to such a conclusion seems like simple sour grapes.

Of course, it’s understandably tempting to hand-wave away the planning and strategy of apps in the Top 10-20 grossing by simply bemoaning eg. the cost of marketing or other factors that make it difficult for small developers to achieve momentum on mobile. But small developers do nonetheless achieve momentum in the app economy; they generally do so with specific tactics that are meant to sidestep direct competition with large, well-funded developers on the basis of marketing budgets.

But it’s also possible to point to examples of small developers (or, at least, not mega developers) that have achieved momentum through strategic performance user acquisition, and it is with these examples that the “luck” argument as a determinant of app economy success completely falls apart.

In June, I gave a presentation at Casual Connect San Francisco in which I proposed a framework for identifying scaleable, viable mobile gaming audiences by studying existing successful games. Studying these games involves first identifying them; to do so, I suggested a definition of a “successful”, marketable game based on the following:

– Has reached a Top 100 Grossing position in the last year;

– Is published by a developer that does not have a game in the Top 10 Grossing (the reasoning here is that developers with Top 10 Grossing hits can afford to buy marketshare at a loss for new games);

– Is on an upward trajectory in ascending the Top Grossing charts.

As it turns out, there are quite a few such apps; that is, apps that are financing growth incrementally through profitable marketing. No luck, no divine intervention, just careful execution and a highly systematic approach to growth.

As per the presentation, for the 365 days preceding June 1st 2016, 355 apps had occupied a Top 100 grossing position at one point. Of those, 33 — almost 10% — met the definition of a successful game as outlined above. That is to say that 33 games had their growth financed ostensibly through profitable performance user acquisition. Some examples are revealed below, with their Top Grossing positions charted over time: 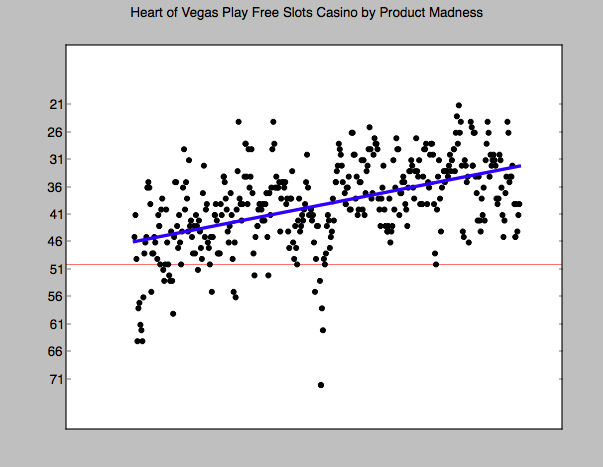 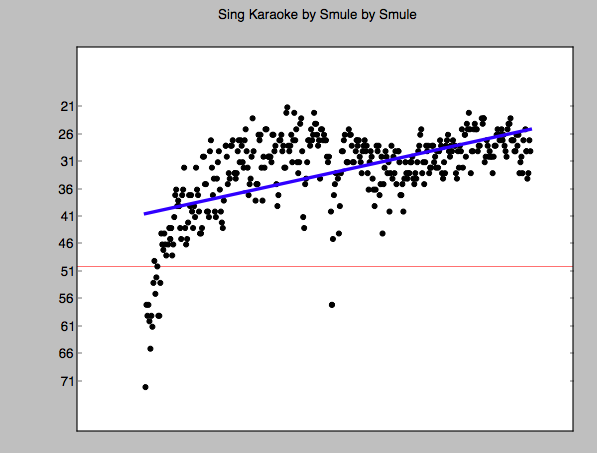 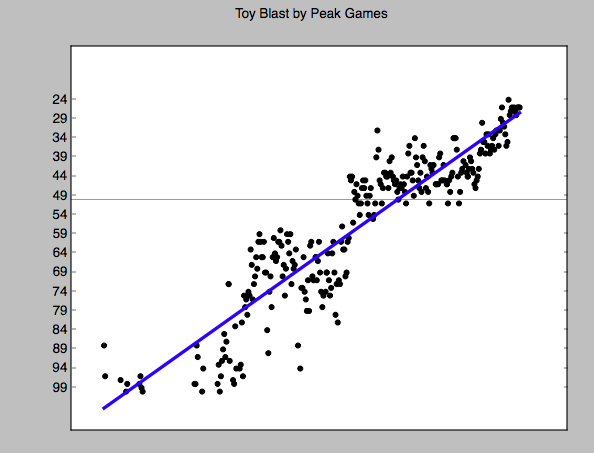 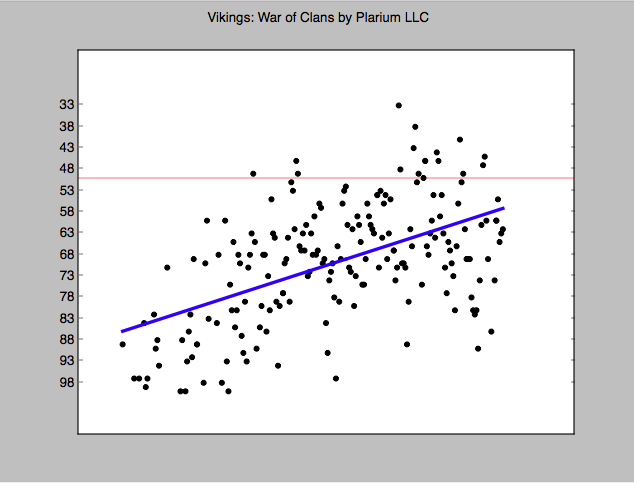 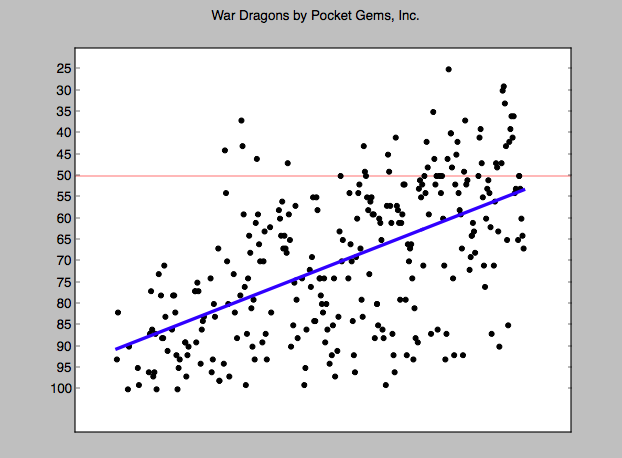 That the vast majority of apps released on the App Store and Google Play fail commercially doesn’t automatically reduce the success of the remainder to luck. A deep understanding of the mobile ecosystem and the ability (and financial wherewithal) to support long-term growth with performance marketing play an outsized role in success.