Arguably, the three most significant trends that drove the mobile gaming sector in 2015 were:

1) Downloads becoming more difficult to achieve as a result of saturation in the app marketplace. In response, developers sought to create differentiation via marketing tactics, leading to a set of marketing strategies emerging that informed game development (and not the other way around). I presented a four-quadrant framework for thinking about those strategies at GDC Europe in August: 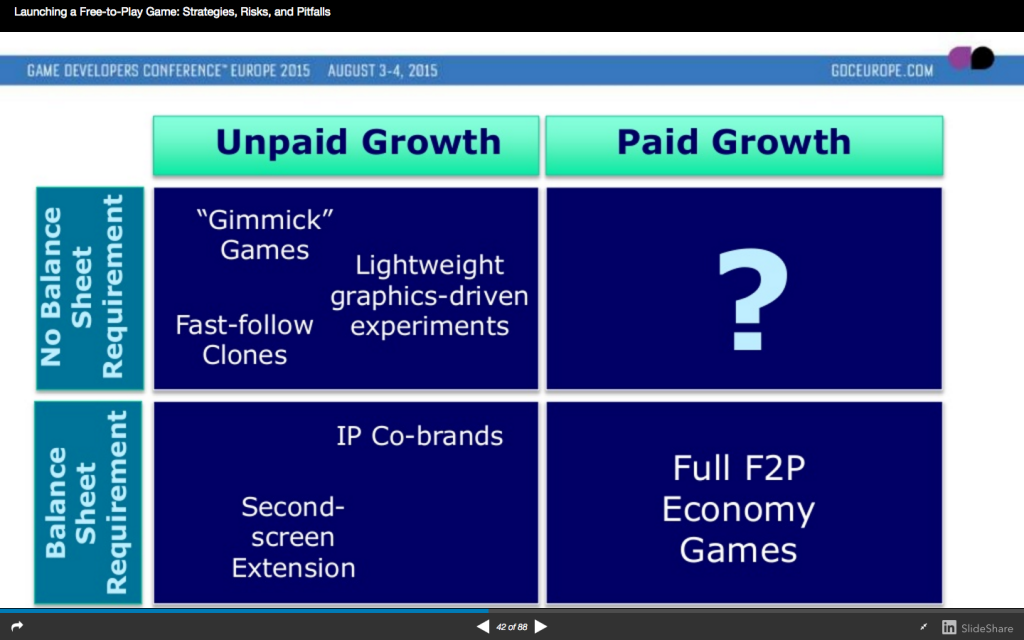 2) As a result of the aforementioned difficulty in achieving downloads, developers began focusing very intently on intelligent and effective cross promotion (with Ketchapp and King having implemented cross promotion especially astutely). The emergence of cross promotion as an effective defensive technique in retaining users is probably one of the reasons Activision bought King; this notion will probably result in further consolidation within the sector (and across the mobile landscape) in 2016.

3) Continued ingenuity in monetization via video advertising, leading to gimmick apps becoming commercially viable projects. This is also reflected in the above four-quadrant framework: building light, viral, single-dimensional apps is now not just a design decision but a marketing strategy.

The combined effects of these trends sets the stage for how the mobile gaming industry may evolve in 2016. Here are six predictions, grouped around two themes: the Top Grossing charts and Discovery.

1) The increasing importance of advertising revenue to app developers will obfuscate the tiers of wealth within the app economy. While the apps in the Top 10 Grossing will still represent the highest earners across the mobile landscape, because some developers are more adept at others at monetizating their users via advertising, and also because the traditional “LTV > CPI” approach to game design represents only one tactic in product marketing now (see the above four-quadrant framework), there will be ambiguity around which developers belong in the “middle class” of the app economy (because the Top Grossing charts do not capture advertising revenue).

This could lead to increased experimentation in game design. In 2016, an app could very well hold a middling (100+) position in the Top Grossing chart yet make more money, in aggregate, than an app in a position in the 20-30 range because of a large user base and better implementation of video ads. With this being the case, and if developers come to realize this, experimenting with new game concepts that implement video ads in novel ways may be more appealing to developers than simply copying the concepts they see in the traditional “second tier” of the grossing charts (positions 20-50).

Supercell, King, and Machine Zone have utilized a strategy that ostensibly intended to retain their oldest players by releasing “spiritual successor” games: Clash of Clans / Boom Beach, Candy Crush Saga / Candy Crush Soda Saga, and Game of War / Mobile Strike. In all three of these cases, the earlier game continued to maintain a higher Top Grossing position, but future releases from these developers (or continued improvements to their latest releases, eg. Mobile Strike and Boom Beach) could capture churn from the origin titles to the extent that the earlier games leave their Top 10 Grossing positions.

3) At one point in 2016, no game will sit in a Top 5 Grossing position (overall, US, iPhone). On November 28th, the day after Black Friday in the US, two of the five Top Grossing apps (US, iPhone) were not games: Spotify (3) and Pandora (5). But a number of dating and streaming apps occupied Top 20 positions (Tinder, Hulu, Netflix, HBO Now), and by November 30th, YouTube had actually climbed to position #4 on the Top Grossing charts.

As the developers of non-gaming apps become more savvy at implementing monetization features, and as retailers increasingly push sales to mobile, it’s not impossible that, if only briefly, games could be edged completely out of the Top 5 Grossing list in Western markets at some point in 2016.

4) A Chinese developer will place a game into a sustainable Top 20 Grossing position in major Western markets (iOS). The size of the domestic Chinese market captured headlines in 2015, yet coverage of its size and rate of growth missed a larger point: while very few Western mobile games developers have achieved noteworthy success in China (largely due to marketplace fragmentation, payments peculiarities, fundamental cultural differences that can’t be “re-skinned” away, and onerous publishing terms), many large Chinese conglomerates (particularly Tencent) have been investing heavily into Western studios.

Part of this strategy has surely been to gain insight into Western gaming markets. It seems feasible that in 2016, a Chinese mobile games developer (either as a subsidiary of a larger conglomerate, or a start-up studio funded by one) will be able to release a game that cracks Western markets and maintains a Top 20 Grossing position for an extended period of time (ie. not a quick burst and fall).

6) App discovery increasingly moves to non-platform communities. Platform-operated discovery mechanics (eg. App Store and Google Play search) create the conditions for a winner-takes-all economy; thus, while app store discovery is not broken (and in fact functions exactly as one would expect it to function), it does lead to revenue concentration.

Three things happened in 2014 and 2015 that pre-sage a shift in general app discovery from platform-operated search to non-platform communities. The first was the rise in popularity of Product Hunt, which proves that driving app installs can be achieved on the desktop web (whether this exact model persists is irrelevant; it proves that discovery can start on the web, albeit in a controlled environment and not via directionless search). The second was the growth of the eSports model on mobile. And the third was the effectiveness of a number of popular “influencer campaigns” at driving significant user base growth.

If users continue to perceive “app discovery” as something that happens actively in the communities that are relevant to their interests (as opposed to passively via ads), it could create an opportunity for smaller developers to gain footholds inexpensively in highly targeted communities.

Of course, for freemium apps (especially those created by VC-based developers), this approach can’t be a kingmaker: the level of scale required to reach commercial success in the app economy generally exceeds what can be achieved by activating a small and targeted group of users. But it could be a good start for developers that simply can’t instantiate their user bases through paid marketing.